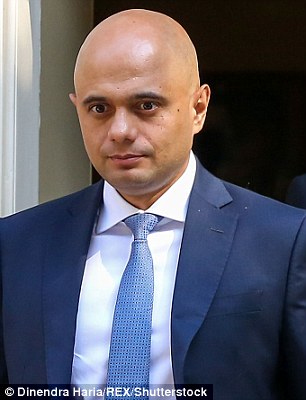 Police chiefs last night warned it would be harder to keep the public safe in the UK and on the continent if we leave the EU without a deal.

In a letter to Home Secretary Sajid Javid, they raised concerns about how officers could lose access overnight to cross-border investigative powers and databases.

The letter was drawn up by the Association of Police and Crime Commissioners’ cross-party Brexit working group after consultation with the National Crime Agency and the National Police Chiefs’ Council. After the letter was leaked yesterday police leaders spoke out about their concerns.

Deputy Assistant Commissioner Richard Martin, NPCC Lead for Brexit, said: ‘Existing European measures, tools and mechanisms allow us to respond quickly and intelligently to crime and terrorism impacting the UK and the EU.

‘They make us better at protecting the public. The UK is the biggest contributor of intelligence to Europol systems and leads more than half of its operational co-ordination meetings.

‘For every one person arrested on a UK-issued European Arrest Warrant, the UK arrests eight people on warrants issued by other member states.

‘From a policing perspective, it is in the interests of both sides to negotiate an arrangement that allows for continued close working, whether as part of existing mechanisms or negotiated alternatives.

‘Without such arrangements, both UK police and EU member states will lose capabilities.’

He said these included identifying criminals and missing people who cross UK borders, detaining and swiftly handing over suspects and sharing biometric data.

Mr Martin stressed a small law enforcement team was currently drawing up contingency plans in the event that access to current European policing measures is lost.

He warned: ‘The contingency measures we are considering will be slower, less effective and ultimately will reduce the ability to identify risk and prevent harm on both sides of the Channel.’