Police will offer a reward of up to $500,000 for information about the brutal rape and bashing of a 69-year-old woman in 1985 that was described at the time as “one of the most violent”.

Elsie – whose surname was not disclosed – was living alone in a Burnley apartment when a man broke in at 2am and committed the prolonged attack.

Her injuries, described as “vicious”, were inflicted by a man she said had blue eyes and blond hair. They were so grave Elsie spent two months in hospital, much of it in intensive care. 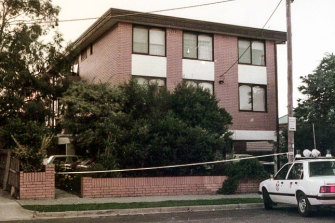 The Burnley apartment block where 69-year-old Elsie was attacked in 1985.

Her daughter Beverley, who was deeply traumatised after the attack, will appear with the head of Victoria Police’s sexual crimes squad, Detective Inspector Juliann Goldrick, on Tuesday to appeal for anyone with information to come forward.

“I want whoever is responsible to take ownership of what they have done. I want them to front up. I just want police to get the mongrel. It destroyed her life after that and she was never the same,” Beverley said.

“My mother may no longer be here, but the monster who did this to her needs to be held accountable for the pain he caused her, both physically and emotionally.”

‘This is by far the most horrible, horrific assault to a person I’ve seen.’

She was so afraid her attacker would return she moved in with her daughter.

She told The Herald newspaper months after the attack: “I thought I was going to die … I’m so scared he will find me.” 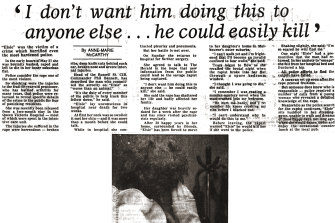 A 1985 newspaper report on the attack.

Detective Inspector Goldrick said police appeals for information after the May 1985 attack attracted many calls and they believe there are people who would still have knowledge of it.

“For us, cold cases are never closed … this matter is so disturbing we feel we can’t let it go and we need to see justice for Elsie’s family,” said Detective Inspector Goldrick.

“We’re launching the reward hoping it will inspire somebody to come forward. We believe there are people in the community who have information about this; at the time it received a lot of publicity and there was a big community outcry.”

She said the original investigators “recall this incident in vivid detail due to the nature of it. They are forever hopeful of finding the person responsible.”

Detective Senior Constable Jess Mastroianni, who is running the cold-case investigation, said it was “by far the most horrible, horrific assault to a person I’ve seen”.

“Reading through it and thinking about it is really horrible, but it makes you want to solve it more, it gives you that drive,” she said. “It is definitely solvable. I believe there are people out there who know who did it, I’m just hoping they hear this and come forward.”

The reward of up to $500,000 will be paid at the discretion of Chief Commissioner Shane Patton for information leading to the apprehension and conviction of the person or people responsible. In appropriate cases, the Director of Public Prosecutions may consider granting indemnification from prosecution to anyone who provides information on the principal offender. Any reward will be subject to the applicant signing a deed of confidentiality.

Anyone with any information in relation to the incident is urged to contact Crime Stoppers on 1800 333 000 or submit a confidential report online at crimestoppersvic.com.au