Home » World News » Police pull over truckie on Southbank, then find drugs and $5m in cash

Police have seized $5 million in cash after they pulled over a South Australian truck driver in Southbank.

A Victoria Police spokeswoman said the 47-year-old South Australian man had been travelling along Dorcas Street when he was intercepted by police, about 9.30pm on Tuesday. 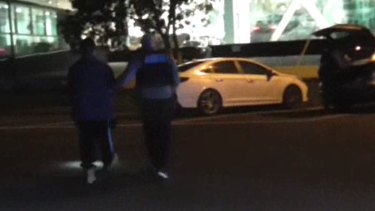 Detectives from the Echo Taskforce have seized drugs and cash following an arrest in Southbank last night.Credit:Victoria Police

The spokeswoman said detectives from the Echo Taskforce subsequently executed a search warrant and found a large amount of cash, believed to be at least $5 million, as well as a quantity of drugs.

Police would not confirm where the cash was found.

The 47-year-old truck driver was arrested and is expected to face Melbourne Magistrates Court on Wednesday afternoon after being charged with knowingly possessing the proceeds of crime with intent to conceal the proceeds of crime, cocaine trafficking and cocaine possession.

Footage released by police shows the accused being led away to a waiting police car in the dark.