Policeman, 38, who worked with a child abuse unit but was caught with graphic images of toddlers being abused is spared jail 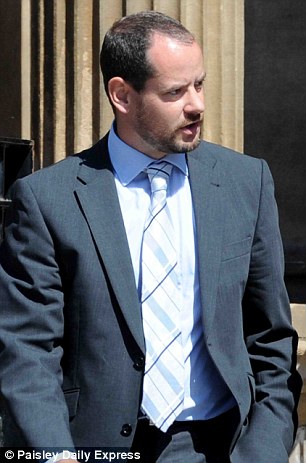 Police officer James Paul, 38, who worked with a child sex abuse unit, kept pictures of children being abused on a computer and a USB stick at his family home in Bishopton, Renfrewshire, in Scotland

A policeman who worked with a child sex abuse unit has been spared jail after being caught with graphic images of toddlers being abused.

James Paul, 38, kept the appalling pictures on a computer and a USB stick at his family home in Bishopton, Renfrewshire, in Scotland.

The disgraced father of two, who was working with a unit dealing with child sex abuse images at the time of his arrest, was suspended from his job when his offence came to light. He has since resigned from the force.

Paul previously appeared in the dock at Paisley Sheriff Court to plead guilty to the single charge against him – being in possession of indecent images of children.

He admitted breaking Section 52A(1) of the Civic Government (Scotland) Act 1982 by having a total of 38 files spread across the two devices at his home on December 6, 2017.

The court heard colleagues raided his £250,000 five-bedroom detached home and searched the property after receiving intelligence that indecent images of children were being stored at the address.

Officers found 33 images on a black Lenovo laptop and a further five on a USB stick.

Of the images found on the laptop, 21 were rated as being at category C – the least extreme.

A further five images were found on a USB stick his wife Laura used to use for work, which he began using to store the illegal images. 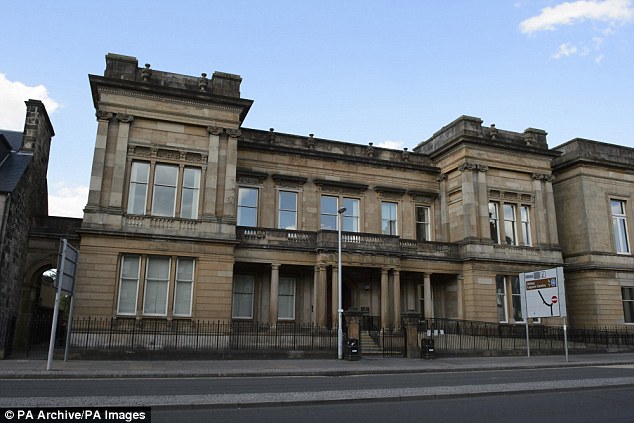 Six officers raided Paul’s home on December 6, 2017, and seized his computer equipment where they found the vile images. At Paisley Sheriff Court Paul was spared jail but ordered to carry out 100 hours unpaid community service and placed on the sex offenders’ register

Sentencing had been deferred for Paul to be assessed by social workers.

Sheriff Susan Sinclair had read reports from social workers and a representative from Stop it Now!, an organisation working to reduce child sexual abuse.

After hearing he had been assessed as ‘a low risk’ of re-offending and that his risk could be managed in the community, she spared him prison but warned him he could be jailed if he fails to comply with the punishment he was given instead.

She said: ‘You have lost your employment and jeopardised your family life.

‘You are a first offender. An alternative to custody is available.’

She placed him on a Community Payback Order, telling him he has to complete the Moving Forward, Making Changes course, which helps sex offenders change their ways.

He was also placed on the sex offenders’ register for three years and told to carry out 100 hours’ unpaid work in the community.

Sheriff Sinclair added: ‘This is a challenging disposal. Breaching it will result in imprisonment.’

Paul also had limits placed on his online activities, being banned from contacting anyone under the age of 17 online and being told he can only own internet-abled devices if approved by his supervisors.

It is understood Paul was previously a Community Police Officer but was working in the unit that categorised child abuse images at the time of his arrest.

A spokesman for NSPCC Scotland said: ‘As a police officer, Paul was in a position of great trust but ignored this to accumulate a sickening collection of images of children being abused.

‘Behind every image was a real child suffering appalling abuse and Paul’s actions have only fuelled the demand for this sickening material to be produced.’

Detective Inspector Tom Carty from the Public Protection Unit, Paisley said: ‘No one is above the law.

‘If you are engaged in criminal activity at the expense of young children, you can be assured we will use every resource at our disposal to find you and hold you to account for your crimes.

‘You may think you can hide behind your computer and take precautions to conceal your identity but that is simply not the case.’