Washington: A series of explosions has struck at the heart of Saudi Arabia's oil empire in an apparent wave of drone attacks claimed by Yemen's Houthi rebels that escalated tensions between the United States and Iran.

The blasts on facilities of the Saudi state-run oil giant Aramco – which the rebel group claimed were carried out by a fleet of 10 drones – marked one of the most devastating strikes into Saudi territory claimed by the Iranian-allied Houthis in more than four years of war in Yemen.

It was also the most serious attack on Saudi Arabia's oil infrastructure in decades, which includes barrages of Scud missiles fired by Saddam Hussein's forces during the 1991 Gulf War. 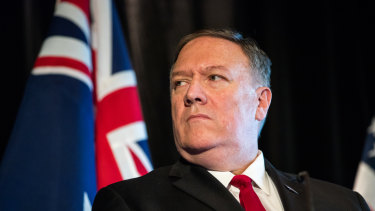 US Secretary of State Mike Pompeo blamed Iran for the attacks.Credit:AP

The attacks immediately escalated tensions in the Persian Gulf, even as key questions remained unanswered, including where the drones were launched from and how the Houthis managed to hit facilities deep in Saudi territory, some 500 miles from Yemeni soil.

US Secretary of State Mike Pompeo accused Iran of being behind what he called "an unprecedented attack on the world's energy supply" and asserted that there was "no evidence the attacks came from Yemen."

He did not, however, specify an alternative launch site, and the Saudis themselves refrained from pointing the finger directly at Iran.

President Donald Trump has condemned the attack in a phone call with Saudi Crown Prince Mohammed bin Salman and offered support for "Saudi Arabia's self-defence," the White House said in a statement, adding that the United States "remains committed to ensuring global oil markets are stable and well supplied."

A NASA satellite image showed what appeared to be a long streak of black smoke flowing to the south-west from the Aramco site. 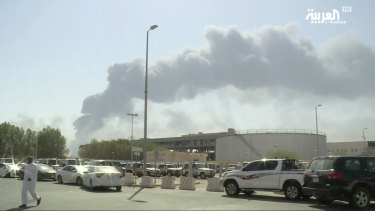 An image made from a video broadcast on the Saudi-owned Al-Arabiya satellite news channel showing smoke from a fire at the Abqaiq oil processing facility.Credit:AP

An Aramco statement said production of 5.7 million barrels of crude was suspended by the attack from "projectiles". That represents more than half of the kingdom's output and about 6 per cent of global oil supply – a shortfall that could send oil price sharply higher.

The Houthis said they had launched the attacks with 10 drones, which would amount to their most audacious strike on Saudi Arabia since the kingdom intervened in Yemen’s war more than four years ago. The Saudi-led bombing campaign has devastated the impoverished country and exacerbated the world’s worst humanitarian crisis.

The Houthis are part of a regional network of militant groups aligned with and backed by Iran – Saudi Arabia’s regional rival – and US and Saudi officials suspect that Iran has dispatched technicians to Yemen to train the Houthis on drone and missile technology.

UN investigators have written that the Houthis have acquired advanced drones that could have a range of up to 930 miles.

That leaves open the possibility that the drones used on Saturday had flown from Houthi-controlled territory in Yemen. But they may also have been launched from another country, such as Iraq, or from inside Saudi Arabia itself. Iran’s Revolutionary Guard has been training its militia proxies in the region, from Lebanon to Yemen, in more sophisticated warfare using drones, according to two people in Iran with knowledge of the programs.

The Houthis have attacked Saudi infrastructure before, primarily with less accurate ballistic missiles.

It was not immediately clear how badly the facilities were damaged, but shutting them down for more than a few days would affect the global oil supply. Analysts who closely follow the Saudi oil industry said they were hearing that the impact would not be severe – perhaps only a few days’ outage, which the Saudis could cover.

The Energy Department said that, if needed, the United States would be ready to use its strategic oil reserves to offset any disruption in supply.

The attacks not only exposed a Saudi vulnerability in the war against the Houthis but also demonstrated how relatively cheap it had become to stage such high-profile strikes.

The drones used may have cost $15,000 or less to build, said Wim Zwijnenburg, a senior researcher on drones at PAX, a Dutch peace organization.