‘It was sarcasm’: Trump insists his claim about being ‘the chosen one’ to fix trade deals with China was ‘just a joke’ and says he does NOT have a ‘Messiah complex’

President Donald Trump has defended his remark that he is the ‘chosen one’ to fix trade deals with China, saying that he was clearly joking

‘When I looked up to the sky and jokingly said “I am the chosen one,” at a press conference two days ago, referring to taking on Trade with China, little did I realize that the media would claim that I had a “Messiah complex,”’ Trump wrote in a tweet on Saturday from Biarritz, France.

‘They knew I was kidding, being sarcastic, and just having fun. I was smiling as I looked up and around. The MANY reporters with me were smiling also,’ he continued.

‘They knew the TRUTH…And yet when I saw the reporting, CNN, MSNBC and other Fake News outlets covered it as serious news & me thinking of myself as the Messiah. No more trust!’ 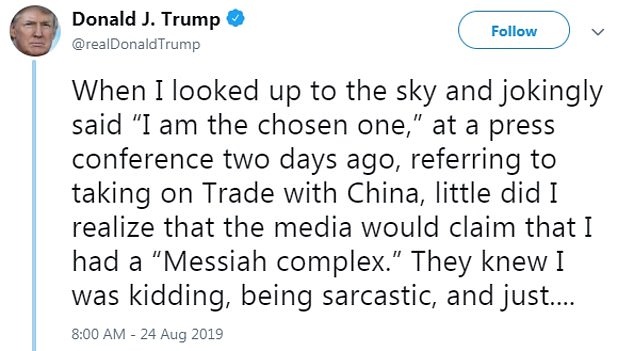 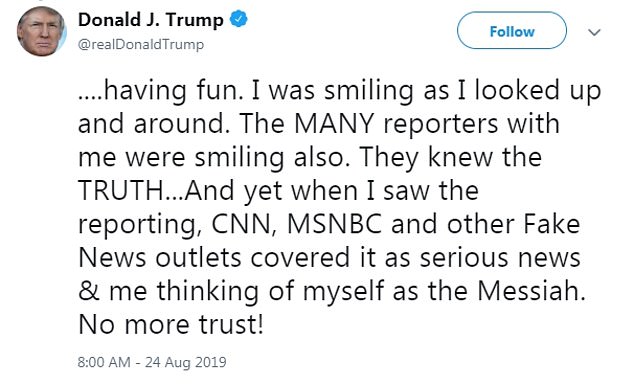 The remarks echoed Trump’s defense on the White House lawn on Friday night.

‘You know exactly what I meant,’ Trump told reporters as he prepared to leave the White House ahead of his trip to France for the G7 summit.

‘It was sarcasm. It was joking, we were all smiling. And a question [suggesting it was serious] is just fake news.’

The controversial comment raised eyebrows across the country on Wednesday as Trump rejected concerns about his trade feud with China, assuring reporters that he is ‘the chosen one’ to tackle decades of trade corruption in Beijing.

‘Somebody said this is Trump’s trade war. It’s not my trade war. This is a trade war that should have taken place a long time ago by a lot of other presidents,’ Trump said on the White House lawn, in criticism of his predecessors Barack Obama, George W. Bush and Bill Clinton. 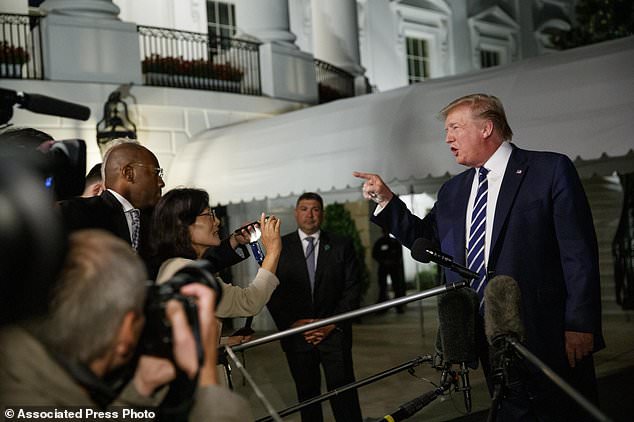 President Trump sought to address comments he made earlier this claiming to be the ‘chosen one’ amid his trade war with China, insisting late Friday that he was ‘only joking’

The remarks came within hours of the president sharing a quote from far-right radio host Wayne Allyn Root, who likened him to the ‘King of Israel’ and the ‘second coming of god’.

The post continued: ‘They love him like he is the second coming of God…But American Jews don’t know him or like him. They don’t even know what they’re doing or saying anymore. It makes no sense!’

Also on Friday, Trump announced tariffs on hundreds of billions of Chinese goods in his latest escalation in the trade battle.