Home » World News » Priest claims sign telling believers to ‘swallow when they want to spit’ is totally innocent… but is everything as it seems?

But can you blame them when the sign outside West Westside Christian Church in Roseburg, Oregon, reportedly read “Forgiveness is to swallow when you want to spit"? 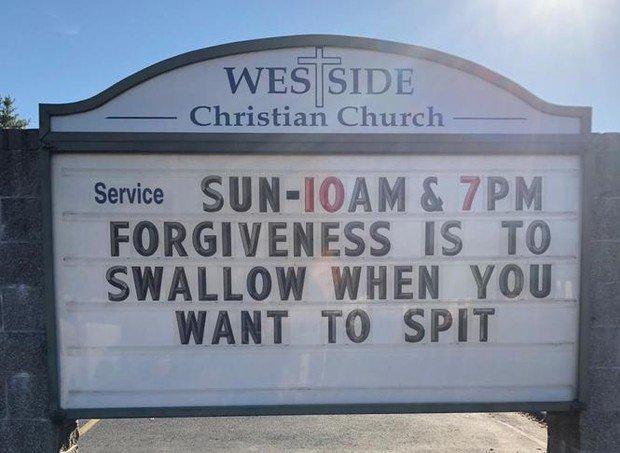 The unfortunately phrased sign was reported in the local paper, The News Review, and is said to have been an honest mistake.

However, the Oregon church is just one of many to have had an almost identical sign erected at their place of worship over the past few years.

Pastor Rick McMichael told the newspaper a group of volunteers came up with the message.

While you may be sceptical, the pastor insisted it was not meant to be sexual.

He explained: "Well, you have saliva, and a lot of times when you get annoyed, you spit at people. "You should just swallow it and get over it."

He later admitted he could understand how people may have misinterpreted the message.

The Sun Online has contacted the church for further comment.

In 2006 a similar error was made on the board in front of Ebenezer Baptist Chapel in Buckley, North Wales.

The red-faced clergyman was forced to apologise to parishioners after accidentally writing saucy joke on a sign up outside his church.