Britain’s housing market is finally cooling down as figures out today reveal that London’s property prices and rents are both falling.

Prices in the capital have slumped by 0.7 per cent in the year ending in July – the lowest rate since September 2009.

While rents in the city have slumped by 0.3 per cent in the past year, according to analysis by the Office for National Statistics.

Nationally, the property bubble is deflating, with prices increasing by 3.1 per cent in the year of July 2018 – its lowest rate since August 2013.

The news will be welcomed by young renters who have seen the property prices balloon in recent years making the home ownership unaffordable for many. 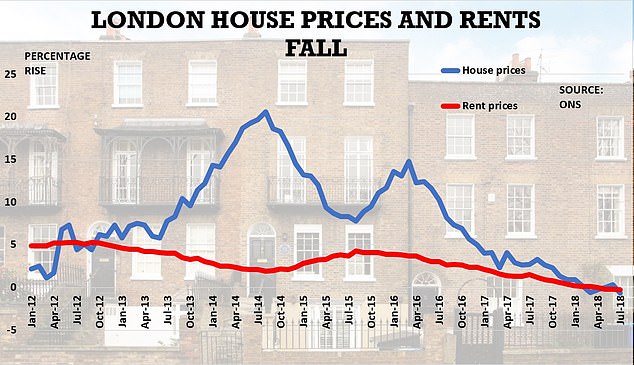 Mike Hardie, from the ONS, said: ‘UK house prices continued to grow but at their lowest annual rate for five years, driven again by a fall in London.’

But after years of soaring prices the cost of homes in London are still sky high – costing on average £477,000 in July.

How have house prices fared in London boroughs in the year ending in July 2018?

Here is how house prices have fared in London boroughs in the year ending in July 2018:

Richmond upon Thames: -0.4 per cent

City of Westminster: +0.9 per cent

Kingston upon Thames: +1.4 per cent

The capital’s tumbling house prices have been driven by a slump in prices in central and west London, while outer London  borough are continuing to see prices rise.

The City of London has seen the sharpest fall in prices – which fell by 6.7 per cent over the year.

Hammersmith was next with a fall of 1.7 per cent followed by Wandsworth at minus 1.6 per cent and Southwark at minus 1.5 per cent.

The figures come as Theresa May today announced a £2billion cash injection for the affordable housing sector as she said it was her personal mission to improve housing in the UK.

In a speech to the National Housing federation in London, the PM insisted people should be ‘proud’ to live on council estates as she vowed to end the ‘stigma’ of social housing.

She condemned sneering attitudes towards housing association and council house tenants, who she says have nothing to be ashamed of.

She said council house tenants were our ‘friends and neighbours’ and ‘not second-rate citizens’, as she announced £2billion for new housing association properties.

Residents should be able to say they were an ‘estate person’ without feeling looked down on, she said.

Mrs May added: ‘They should be proud to call it their home.’

But Mrs May’s speech today marked a significant departure from these ideals.

Instead she lashed those who stigmatise social tenants.

She said: ‘For many people, a certain stigma still clings to social housing. Some residents feel marginalised and overlooked, and are ashamed to share the fact that their home belongs to a housing association or local authority.

‘On the outside, many people in society – including too many politicians – continue to look down on social housing and, by extension, the people who call it their home.

‘We should never see social housing as something that need simply be ‘good enough’, nor think that the people who live in it should be grateful for their safety net and expect no better.

‘Whether it is owned and managed by local authorities, tenant management organisations or housing associations, I want to see social housing that is so good people are proud to call it their home … our friends and neighbours who live in social housing are not second-rate citizens.’ 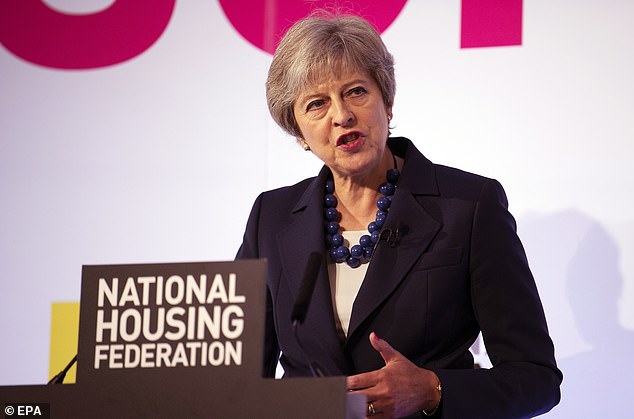 Theresa May, pictured speaking at the Housing Federation today, said people should be proud to live on housing estates as she announced a £2billion cash boost for housing association properties

But Dan Tomlinson, Policy Analyst at the Resolution Foundation think-tank, warned that the fall in house prices in the capital does not mean the cost of living squeeze is over.

He said: ‘The UK’s housing market shows some signs of cooling, with growth in the house price index slowing to its lowest level since 2013.

‘But we should be cautious about thinking this signals an imminent easing of cost of living pressures.

‘This slowdown is driven almost entirely by trends in London and the South East. House price rises are still outpacing wage growth across many other parts of the country.

How have house prices fared across the UK in the year ending July 2018?

This is how property prices in the UK have fared in the year ending in July 2018:

‘There are also good and bad house price falls because what really matters is how much of a families’ incomes is devoted to housing costs.

‘In so far as the recent slowdown reflects worries about lower income growth for British families, it is hard to see it as good news for living standards.

‘The reality is that home ownership will remain far too distant a dream for many young people, who are likely to remain renting for some time.’

He added: ‘So it’s good to see the Prime Minister signalling a shift in attitudes towards renting by reforming tenancies in the private rental sector and announcing a £2bn boost to increase the supply of affordable social housing in the 2020s.

‘However, far more will be needed if we are going to turn around the locking out of young families from our social housing stock.’

Across England, house prices have increased by 3 per cent annually, reaching £249,000 on average.

Within England, the North West showed the highest annual growth, with prices increasing by 5.6 per cent in the year to July 2018.

This was followed by the South West and West Midlands regions (both at 4.4 per cent). 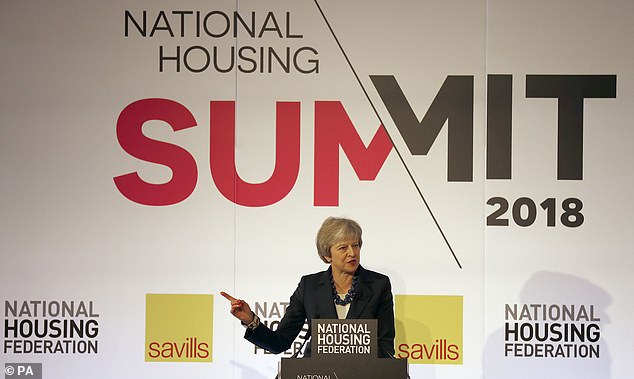 The Prime Minister condemned sneering attitudes towards housing association and council house tenants, who she says have nothing to be ashamed of

The report said: ‘This is the first time since May 2009 that London, the South East and the East of England have been the lowest-ranked regions for annual growth.’

In Scotland, average house prices increased by 3.2 per cent over the year to July to reach £152,000.