Paris: French prosecutors have requested two years of prison and a two-year suspended sentence for former president Nicolas Sarkozy in a landmark corruption and influence peddling trial in Paris.

The 65-year-old Sarkozy is accused of having tried to illegally obtain information from a senior magistrate in 2014 about an investigation involving him. 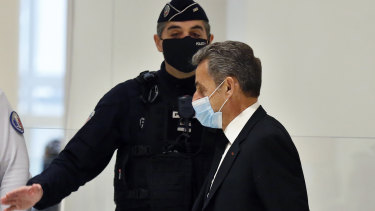 Former French president Nicolas Sarkozy arrives at the courtroom in Paris on Monday.Credit:AP

Defence lawyers were due to speak on Wednesday and Thursday. The verdict is expected at a later date.

It’s the first time Sarkozy, president from 2007-2012, is facing trial, though the conservative politician is the target of multiple investigations.

Sarkozy and Herzog are suspected of promising Azibert a job in Monaco in exchange for leaking confidential information about an investigation into suspected illegal financing in the 2007 presidential campaign.

The trial is focusing on wiretapped phone conversations held in February 2014 by Sarkozy and Herzog, who were communicating via secret mobile phones registered to the alias name of “Paul Bismuth”.

“I’ll help him,” Sarkozy could be heard saying in one of those discussions about Azibert.

The magistrate never got the job and retired later that year.

“I have has never committed any act of corruption — never," Sarkozy told the court on Monday. He acknowledged giving “a little help” to many people as part as his political career without malicious intent.

Prosecutors argued that a “corruption pact” had been reached between the parties. Under French law, as soon as a deal has been offered, it constitutes a criminal offence even if the promises haven’t been fulfilled. 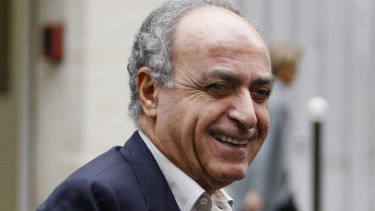 The Lebanese public prosecutor's decision on Monday also imposed a travel ban on Ziad Takieddine, a French-Lebanese national who was detained in Beirut last week based on an Interpol request, it said.

Sarkozy withdrew from active politics after failing to be chosen as his conservative party’s presidential candidate for the 2017 election, won by Emmanuel Macron.