Queen Victoria Market is undergoing a deep clean after it was revealed a woman who later tested positive for COVID-19 visited the market’s fruit and vegetable section and a female toilet.

Market chief executive Stan Liacos said about 40 stallholders and employees who were working in the affected area between 8.25am and 10.10am on Thursday have been told to get tested immediately and isolate at home for 14 days. 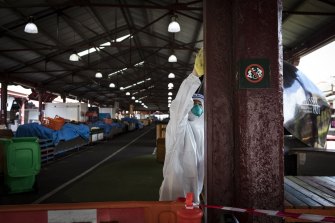 Stalls at Queen Victoria Market being cleaned after it was listed as an exposure site by the Department of Health.Credit:Chris Hopkins

Authorities were working to identify everyone working at the market during the exposure period.

Any shoppers who were there at the time are also required to get tested and isolate for 14 days, regardless of the test result.

The Department of Health listed the A and B sheds at Queen Victoria Market, and Yarra Trams number 11 and 58, as exposure sites on Sunday afternoon.

Trading at the market had already been down as a result of last year’s rolling lockdowns, especially when stage four restrictions were in place and – as a metropolitan market – when the five-kilometre rule was in place.

“It’s been an incredibly challenging time for the market really for the last 12 months,” Mr Liacos said.

“This is an additional blow. But it’s a very resilient community, the trader community. And we’ll just work through this.”

Cleaning teams were conducting a deep clean of the fruit and vegetable sheds, as well as “high-touch” areas throughout the market, on Monday.

The market, which is closed on Monday, is due to reopen on Tuesday. 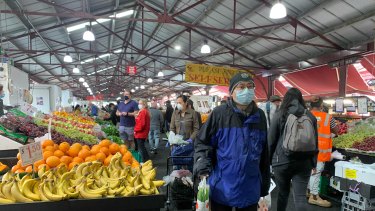 Mr Liacos said the Department of Health had confirmed the Queen Victoria Market was not a current risk and remained safe to visit.

Victorian COVID-19 response commander Jeroen Weimar said authorities were working rapidly to get in touch with anyone who was at the market on Thursday morning.

“Yesterday, we had identified some 949 primary close contacts. That number has now grown to around 1100. There are also almost 600 people who are linked to Melbourne Airport Terminal 4,” he said.

Mr Andrews said 931 of the 933 close contacts identified on February 11 were contacted within 48 hours.

“It is the guideline, that is the standard, that is 99.8 per cent, so that is a very strong result,” he said.

Get our Coronavirus Update newsletter for the day’s crucial developments at a glance, the numbers you need to know and what our readers are saying. Sign up to The Sydney Morning Herald’s newsletter here and The Age’s here.