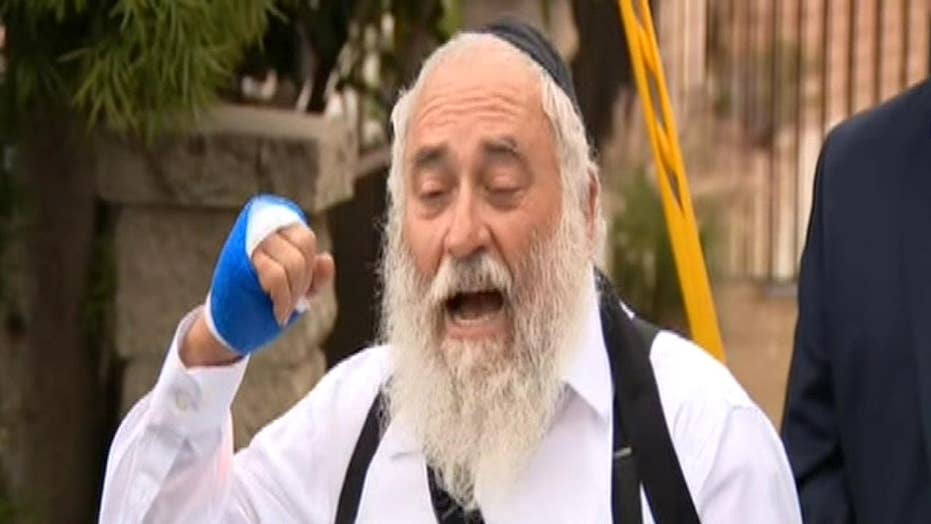 The Rabbi who was shot inside a Southern California synagogue on the last day of Passover said Sunday that it was nothing short of a miracle that the gunman's semiautomatic rifle jammed and prevented what would have been a “bloodbath."

Rabbi Yisroel Goldstein appeared in bandages during a press conference outside Chabad of Poway on Sunday. He lost his index finger after being shot in a shooting spree that killed one and injured three. Two worshippers — 34-year-old Almog Peretz and 8-year-old Noya Dahan — suffered shrapnel wounds.

He said he looked up on Saturday and saw a young man wearing sunglasses standing in front of him with a rifle. He said he lifted his hands and was shot. He says he lost his index finger. And then, Goldstein said, “miraculously the gun jammed.”

There was a room nearby that was crowded with people and children.

A 19-year-old, John T. Earnest, was arrested after the attack is expected to be arraigned this week on charges including murder and attempted murder.

The Los Angeles Times reported that Goldstein recently asked a Border Patrol agent to attend the temple while armed and it apparently paid off. The agent gave chase to the suspect and fired as he sped off.

Lori Gilbert-Kaye, 60, died of injuries she sustained in the shooting near San Diego. Gilbert-Kaye is believed to have thrown herself in front of Rabbi Yisroel Goldstein, possibly saving his life. One witness tol the Los Angeles Times that Kaye’s husband began to do CPR on an injured person and was overcome when he realized it was his wife.

An online manifesto written by a person identifying himself as Earnest says he was inspired by the mass shooting at two New Zealand mosque that killed 50 Muslims last month.