I was asked on a Thursday morning if I could go cover my first hurricane in Florida with ABC Chief Meteorologist Ginger Zee. By that evening, I got a phone call saying the plan had changed and I would be covering Hurricane Dorian from the Bahamas instead.

The eye of the strongest Atlantic hurricane to make landfall in recorded history ended up going right over us.

Traveling to the Bahamas

I woke up early Friday to catch my 6 a.m. flight to Atlanta. Once in Atlanta, I’d link up with the rest of the ABC News team, ABC News correspondent Marcus Moore and producer Scott Shulman, and we’d fly together to Marsh Harbour. There were only 11 passengers on our flight. A flight attendant told us we were going in the wrong direction and couldn’t believe that we were actually flying to Marsh Harbour to stay on for the storm.

One person was going to board up his vacation house. Another was going to drive a friend’s boat from Marsh Harbour to Key West, Florida, to keep it safe. We had a very different reason for going: We were going to ride out and report on the storm before Dorian made its way to the United States.

ABC News ended up being the only U.S. media outlet on the Abaco Islands.

We began our drive to the hotel from the airport and saw people boarding up a business. They weren’t worried about the storm barreling its way toward us; they said they had survived Hurricane Floyd in 1999 and that this storm would be no different. The workers at the hotel said the same thing, they weren’t worried after surviving Floyd.

We made our way to Maxwell’s, the large supermarket that served much of the island. Everyone we spoke with there said they weren’t worried. One woman told us she planned to sit on her couch with her feet up and watch TV.

By Saturday our weather team in New York began to warn us that Dorian could be a Category 5 hurricane when it arrived at Marsh Harbour. We had dinner with our friends Jenise Fernandez and Brian Ely who were covering the storm for Miami ABC affiliate WPLG.

I was woken up at 2 in the morning on Sunday to loud, howling winds. Dorian was beginning to arrive. My alarm went off at 5:30 a.m. so we could get ready for “Good Morning America.” ABC News meteorologists Sam Wnek emailed to say that Dorian was a Category 5 heading directly toward us and the eye would pass over us around 1 p.m.

“We’ll be fine,” Scott told me and Marcus.

The team suited up and braved the rain and winds to be live on “GMA” and “This Week with George Stephanopoulos.” Tree branches were beginning to fall down — and the wind was only getting stronger. We shot more footage after the shows, but after several minutes, Scott — who has covered several hurricanes — told us the winds were getting too dangerous and we needed to get inside. The conditions rapidly deteriorated. Ginger texted me asking our coordinates so she could assess where we were and how safe we’d be. She said we should expect large storm surge, but being on the third and fourth floors, we’d be safe from it.

The northerly winds began pounding our door, pushing rain water right through the gaps. Marcus went live on ABC News Live and Facebook while I mopped up the water on the floor. We lost power during his hit at 11:39 a.m. The resort told us their generators had enough fuel to last for 10 days so the loss of power was unexpected. We later learned that the generators were blown off their foundations and tumbled like toys. 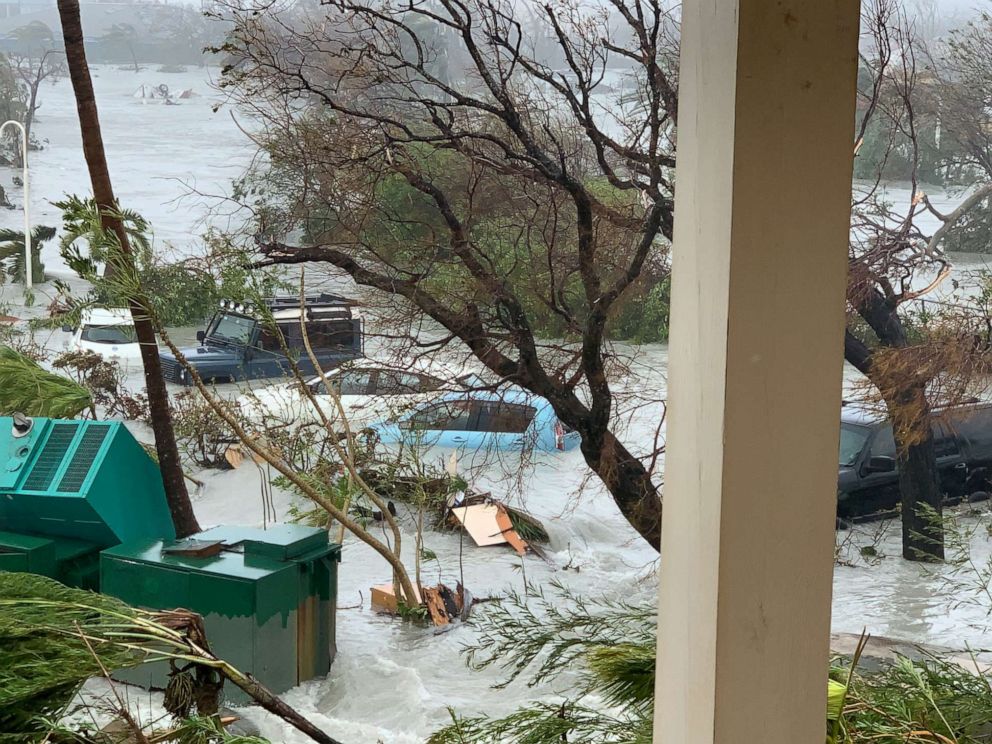 The eye wall was approaching with wind gusts up to 220 mph. It sounded like a jet. The sky was completely dark. At one point, the winds were so strong we thought the door would blow inside our condo. We grabbed a few items and ran up to the second floor of the condo.

Shortly before 1 p.m., the winds were dying down and the sky was getting brighter and our ears popped more frequently. We knew that meant the eye was now over Marsh Harbour. Pretty soon the winds stopped completely. We knew there wasn’t much time before the winds came back so we went outside to get video and assess the damage.

I wasn’t prepared for what I was about to see.

Ginger had told me to expect large storm surge, but I didn’t expect water as far as the eye could see.

I moved from the balcony in the back of the condo to the hallway in front where Marcus and Scott were filming. They were interviewing a man named Robin, who was swept from his house and grabbed onto our minivan before he could be swept out to sea. While interviewing Robin, we heard several people screaming, “HELP! HELP!” Scott ran down stairs and jumped a fence and encouraged them to swim.

Meanwhile I was inside running all of our equipment and food upstairs to our safe room because I knew the windows on the main floor would blow out when the winds came back. Scott saved those four people, Marcus carried one or two up the stairs to our condo and I gave them medical aid and sent them to the hotel’s bunker.

It wasn’t long before the winds began to pick up again. We knew we wouldn’t be able to stay on the main floor of our condo like we did before the eye arrived as the winds shifted south. There was a safe room upstairs in our condo — basically an interior living room without windows. Two people in a condo below us said the utility closet on the second floor had just opened up and would be a safe spot for us to hunker down. Like our condo, it had 10-inch-thick concrete walls and was on the north side of the building so it’d be shielded from any wind. We ran back to our condo to grab battery-powered lights and a few essential items (like water and food), invited Robin to join us — he declined, instead opting to ride out the storm in our condo — and stayed in the utility closet for about five hours.

The winds had subsided a bit around 7 p.m., and we felt it was safe enough to attempt to go back to our condo. We had a very tough time opening the door, so we knew that several windows had blown in. It took the three of us to push all of our body weight against the door just to get it open.

Once inside, we saw that two windows had blown in and there was about 3 inches of rain water on the floor. The furniture was tossed everywhere. The refrigerator was pulled from its spot in the wall and its contents thrown all around the kitchen.

Upstairs, my bedroom was in even worse shape. The window was sucked out of the wall. There wasn’t any glass in the room — the window was gone. There was just a hole in the wall and furniture picked up and thrown around the room. 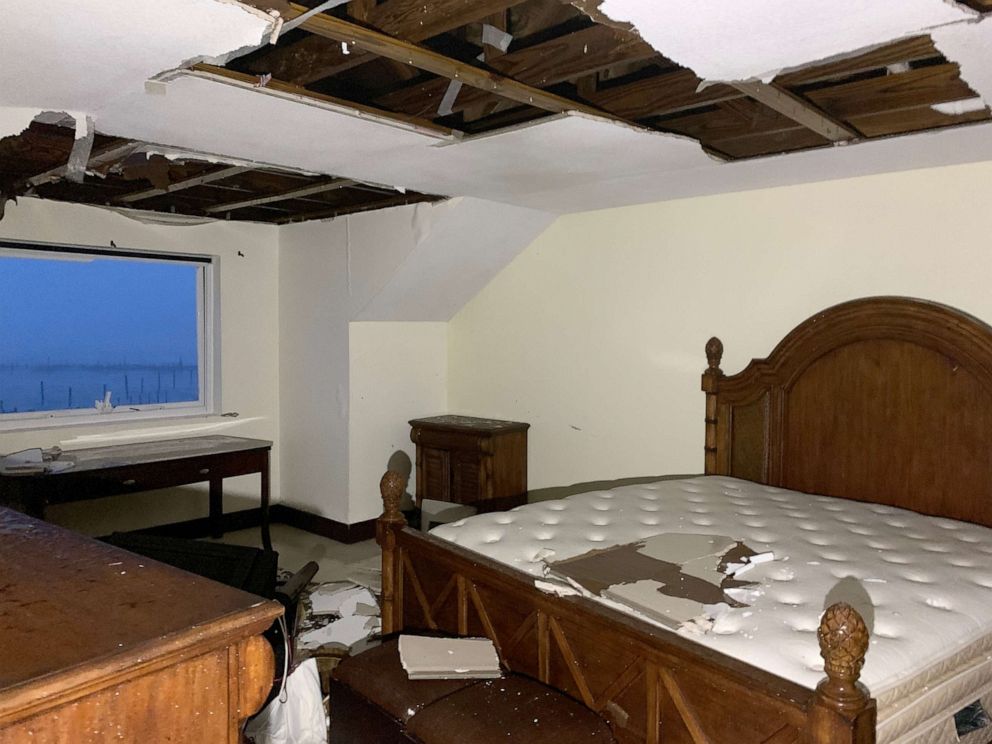 Scott made us military rationed meals for dinner and Marcus and I called our parents to let them know we were OK. We brought a roller-bed up from the utility closet and I slept in our safe room’s closet just to make sure nothing would get thrown around from the wind.

The wind and rain were still strong Monday morning. There was a knock at our door. It was Jenise and Brian from WPLG and we were all so relieved to be reunited.

Scott and Marcus walked into town to tour the devastation; I had to stay back because our door would only open from the inside. I was able to walk around the resort property and saw yachts on land, trees snapped in half, flooded-out roads and destroyed buildings. 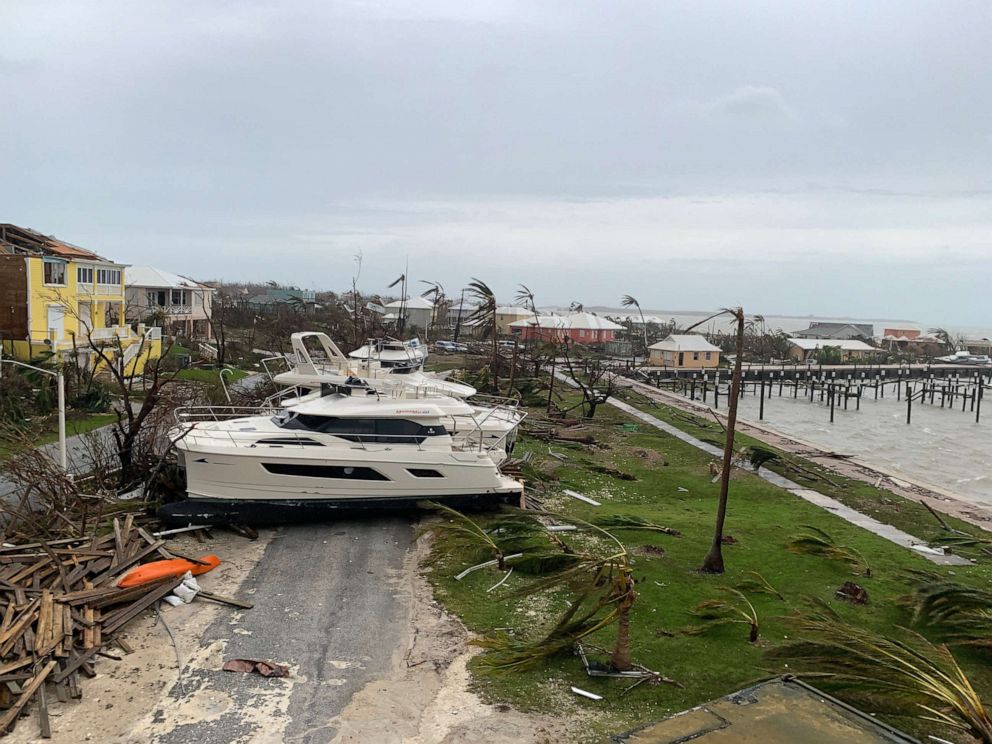 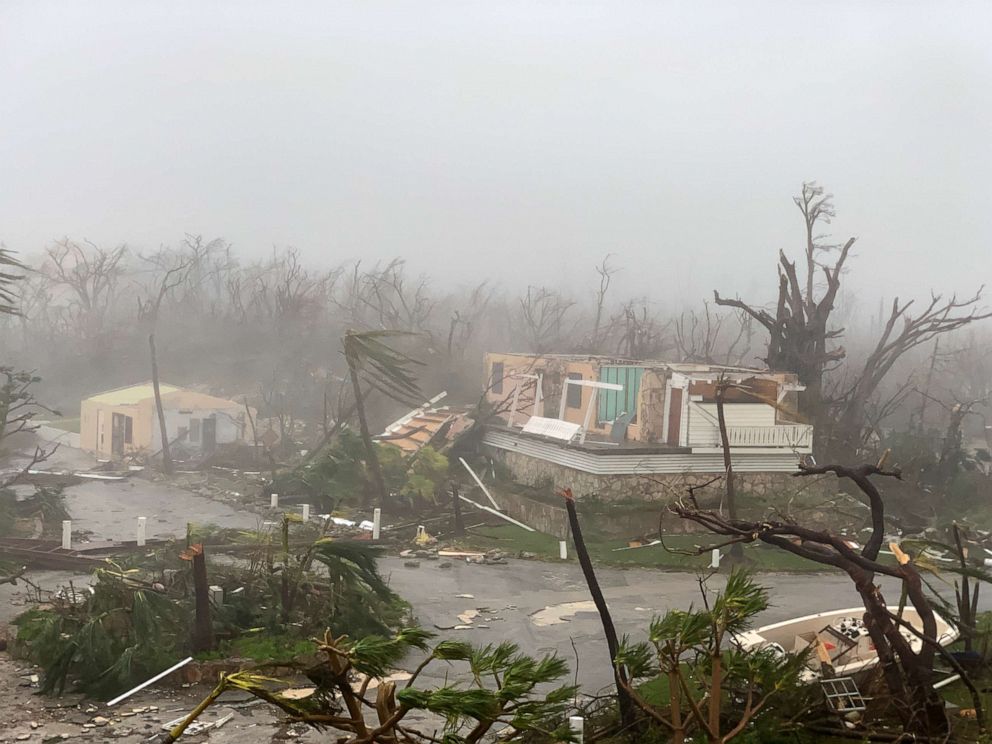 Throughout the day, we experienced on-and-off high winds and strong rain squalls. During those squalls you could barely see a few feet in front of you. Jenise and Brian moved into our condo with us. Scott had the good fortune to bump into a woman named Ashley who still had cell service. He came running back to our condo so he could edit video into 20-second clips and text it from her phone to the New York office.

We all slept together in our safe room on couches, chairs and the roller beds. We spoke with ABC and they said they were working on getting a helicopter to evacuate us from Marsh Harbour.

Out of the disaster zone

At around 3 p.m. on Tuesday, the winds began to subside and Scott went searching for Ashley so he could send more of our video to the office. At the same time, we called the office to check in with them. They told us that a helicopter had just left Nassau and was heading toward us.

We made the quarter-mile trek to the helipad together, carrying our bags over trees, around boats and under ropes connecting the boats to what used to be docks.

Jenise and Brian boarded a helicopter at around 4:30 p.m. and Scott, Marcus and I boarded one about 45 minutes later. We arrived in Nassau an hour later and Marcus was live on “World News Tonight with David Muir” about 15 minutes later. We got to the hotel and uploaded material for the “Nightline” episode in a few hours despite useless, water-logged video equipment. 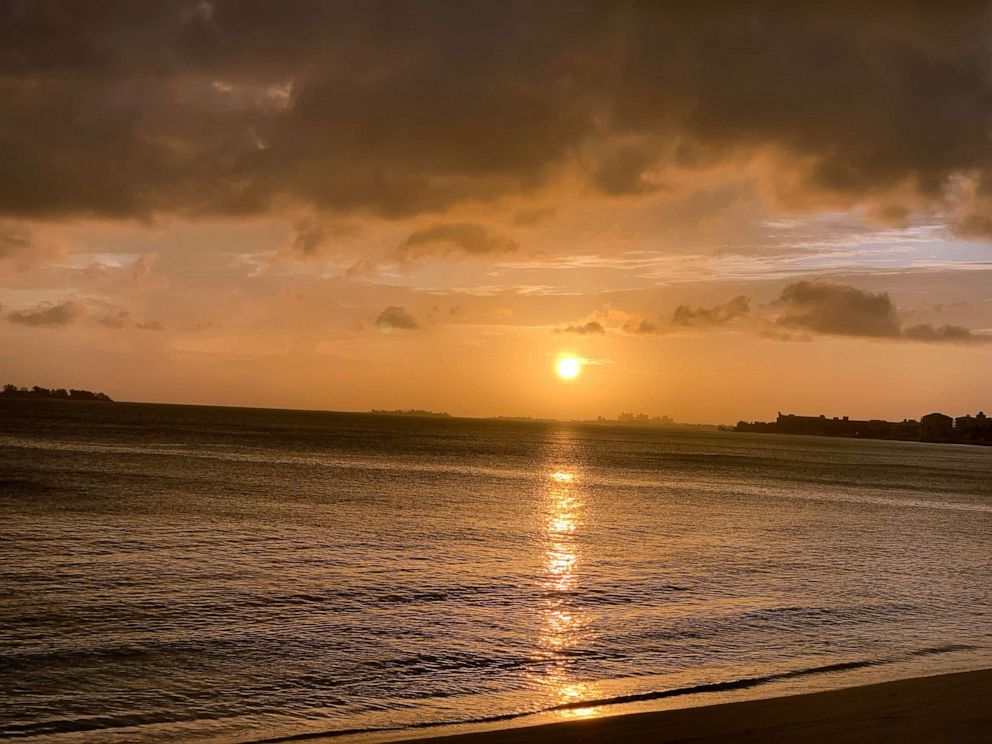 We spent the rest of the day at the airport watching U.S. Coast Guard and other military helicopters come and go from Abaco Island. Unlike Abaco, where we were the only journalists, there was an army of media in Nassau. We witnessed families reunite with loved ones who had been evacuated from Marsh Harbour. The screaming, the cheering, the tears. It was such a great, emotional scene.

I spent Thursday going over video shot in Marsh Harbour, went to the airport to watch more family reunions and visited the hospital in Nassau on Friday.

We met so many people who lost everything: their possessions, their businesses, their money, their passports. One thing they didn’t lose, though, stood out: their hope.

This was my first hurricane, but almost certainly won’t be my last. The images, the sounds and the people will forever stay with me.