The complex financial schemes that helped Africa’s richest woman amass a fortune at vast cost to the Angolan state can be revealed for the first time after a huge leak of confidential documents from her business empire.

Isabel dos Santos, who is known as “the princess” in Angola, the oil-rich nation her father ruled as president for almost four decades, has long denied that her estimated $2.2bn (£1.7bn) fortune is the result of nepotism or corruption.

However, an investigation by the Guardian and journalists in 20 countries, led by the International Consortium of Investigative Journalists (ICIJ), suggests Dos Santos benefited from extraordinary opportunities afforded to her by the government of her father, José Eduardo dos Santos, before he stood down as president in September 2017.

What is the Luanda leaks investigation?

The Luanda leaks project is based on a trove of 715,000 emails, charts, contracts, audits and accounts detailing the business operations of Isabel dos Santos, the daughter of the former president of Angola.

The files were initially obtained by the anti-corruption charity Platform to Protect Whistleblowers in Africa (PPLAAF), which shared them with the International Consortium of Investigative Journalists (ICIJ).

The documents, which cover a period between 1980 and 2018, have been reviewed by more than 120 journalists from 37 media outlets, including the Guardian, the BBC and the Portuguese newspaper Expresso.

The businesswoman, who spends much of her time in London, controls interests across Africa and Europe spanning banking, telecoms, TV, cement, diamonds, alcohol, supermarkets and real estate.

The Luanda leaks are based on a trove of 715,000 emails, charts, contracts, audits and accounts that was obtained initially by the Platform to Protect Whistleblowers in Africa (PPLAAF), an anti-corruption charity whose work with key witnesses helped topple the South African leader Jacob Zuma. The trove was then shared with the ICIJ.

Dos Santos and her husband, the businessman and art collector Sindika Dokolo, say computers belonging to their employees and legal advisers were hacked. They say they are the subjects of a politically motivated witch-hunt led by Angola’s new president. Through their lawyers, they rejected any allegation of wrongdoing, and vehemently denied being financed by state money.

“There is an orchestrated attack by the current government that is completely politically motivated, it’s completely unfounded,” Dos Santos told BBC Africa. “I can say my holdings are commercial, there are no proceeds from contracts or public contracts or money that has been deviated from other funds.”

Dokolo described the government actions as “armageddon” and a risk to the economy. The couple say their businesses employ thousands of people in Angola and are among the country’s biggest tax contributors. “We have worked and invested in this country, more than many others,” he said.

In an open letter, José Eduardo dos Santos rejected allegations of wrongdoing, saying he had “not transferred to himself, or to any other entity, money from the state”.

After a seven-month-investigation, the Guardian, working alongside outlets including the BBC, the New York Times and Portugal’s Expresso newspaper, has uncovered documents that raise questions over preferential deals and lucrative transactions with the Angolan state worth hundreds of millions of dollars.

The material reveals an opaque network of about 400 companies, many of them offshore, connected to Dos Santos, Dokolo and their associates, and the assistance given to the couple in managing them by a coterie of European and American management consultants, accountants and lawyers.

The documents appear to suggest that:

• The state oil company Sonangol sold Dokolo what has become the couple’s most valuable asset: a stake in the Portuguese oil corporation Galp, now worth €750m after an initial loan-backed payment of just €11m.

• A total of $115m in payments to consultancy firms, ordered while Dos Santos was chair of the state oil company, were routed through a Dubai company controlled by her associates.

• A business venture with the state diamond company allegedly resulted in $200m of public debt propping up an ailing Swiss jewellery brand partly owned by Dokolo.

• Two Dos Santos companies and their subcontractors stood to collect up to $500m in fees from a Dubai-style real estate development in the Angolan capital, Luanda, that was later cancelled by the new president for “over-invoicing” and “disproportionate compensation”.

Three weeks ago, Angola’s attorney general announced a freeze on the assets of Dos Santos, Dokolo and their chief adviser, alleging that their dealings with the country’s publicly owned oil and diamond companies had “harmed” the state to the tune of $1bn.

Angolan prosecutors launched a criminal investigation into her actions while at the helm of the state oil company, Sonangol, in September. They are working with counterparts in the UK, Portugal, Switzerland, the US and the Democratic Republic of the Congo to trace assets, prevent money transfers and gather information.

Dos Santos says she is the subject of a witch-hunt by Angola’s government, designed to neutralise her as a potential political opponent. On Wednesday, she provoked speculation about a bid for the presidency, telling a TV interviewer it was “possible” she would run for office.

However, Dos Santos has not visited Angola for more than a year. A prosecutor told the Portuguese newspaper Expresso she was thought to have left the country hours after receiving a request from prosecutors to appear for questioning in July 2018. Through her lawyers, Dos Santos said she had “no record of having received any such request”, and that there was no question of her having refused to meet prosecutors.

Dos Santos and her half-brothers and sisters are among the most prominent members of the oligarchy of powerful families in Angola. Her father came to office in 1979 as head of the People’s Movement for the Liberation of Angola (MPLA). After the end of the civil war in 2002, President Dos Santos and the MPLA consolidated power by bringing the most valuable sectors of the economy into government ownership. 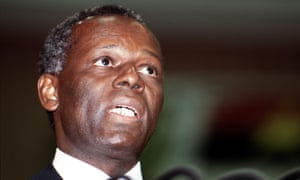 The spoils were shared with a select group with links to politics and the military. As a result, Africa’s second-largest oil producing nation became known as one of the most corrupt countries on Earth, ranking near the bottom of the Transparency International corruption perceptions index.

“These are the classic symptoms of a captured state,” said Steve Goodrich, a senior research manager at Transparency International UK, after reviewing the Luanda leaks findings. “Here we have industry and politics all in one family, with no apparent separation of powers.”

The leak includes data from Fidequity, a team of advisers who acted as a family office for the couple, administering their empire from plush premises above a Louis Vuitton salesroom in Lisbon.

As the couple grew richer, emails and board minutes show the number of banks prepared to have them as clients dwindled. The data indicates that top-tier lenders severed ties after the Dos Santos regime was ruled a corruption risk by compliance departments.

Company service providers in the Netherlands and the Isle of Man also turned down their business, the files suggest. Dokolo says he has been unable to open bank accounts under his own name in London and Paris since 2001.

Other European companies appear to have taken a different approach, helping the couple move money and win lucrative contracts from the Angolan state. The blue chip firms PwC and Boston Consulting Group (BCG) collected millions in fees, providing services such as auditing of accounts and management consultancy.

PwC, which handled auditing and accounts for Dokolo companies in Malta, Switzerland and the Netherlands, said it had opened an internal investigation “in response to the very serious and concerning allegations” and “taken action to terminate any ongoing work for entities controlled by members of the Dos Santos family”.

BCG said senior partners conducted regular reviews. “We are proud of and take responsibility for our work, and are strict in adhering to our policies and values,” a spokesperson said.

Since taking over the leadership of the country and its ruling party, with the blessing of José Eduardo dos Santos, the new president, João Lourenço, has vowed to fight the “cancer of corruption”. The most high-profile targets of his anti-graft drive have been the children of his predecessor.

Isabel dos Santos’s half-brother, José Filomeno dos Santos, is on trial for the attempted looting of $500m from the country’s sovereign wealth fund. He has pleaded not guilty. Her half-sister, Welwitschia dos Santos, a member of parliament, was impeached last year after moving to Britain. She fled after alleging she had been threatened by the Angolan secret service.

Dos Santos, however, is fighting back. In recent weeks, she has toured media outlets giving interviews, saying her wealth is the result of hard work and business acumen. Her husband has opened an arbitration dispute in London against the state diamond company, and says he is involved in a second arbitration over Galp in the Netherlands.

The Netherlands dispute centres on a loan from the state oil company, Sonangol, which sold part of its shareholding in Galp to a vehicle controlled by Dokolo in 2006. The agreed price was €75m, with Dokolo’s company making an upfront payment of €11.2m and committing to pay the rest at a later date from dividends. If the whole amount had not been repaid by 31 December 2017, in euros, Dokolo’s vehicle risked losing the shares.

While Dos Santos was chair of Sonangol, it agreed to let Dokolo’s vehicle make the repayment in Angola’s volatile currency, the kwanza. After Dos Santos was sacked from the state oil company, its new managers cancelled the deal and sent the money back. Sonangol is now demanding compensation.

Dokolo denies the deal was a preferential one, and said there was “absolutely no wrongdoing”. Through his lawyers, he said that it had been approved after an internal review at Sonangol, and that the state oil company’s purchase of a shareholding in Galp, one of its most successful investments, was originally his wife’s idea and had been negotiated by him.

Dokolo said he invested $115m in equity in the Swiss jeweller; that his commitment matched that of the state diamond company; and that the business “steadily improved” under his ownership.

Dos Santos said under her leadership, Sonangol spent far less on consultants than previously. Her lawyers said the Dubai company that handled Sonangol’s payments to consultancy firms was a lead contractor with a formal contract approved by the board of directors, and was not owned by Dos Santos.

Challenged about how she has apparently benefited from her father’s decrees, Dos Santos said the president’s role was to ratify government concessions and licences, and that it would be hard to do business in Angola without ever having a decree relating to one of her companies. Her lawyers added that the prices agreed with her companies for the proposed redevelopment of Luanda were competitive, and that the allegations of overcharging were “false and unfounded”.

In a sign that the international community is beginning to close ranks against Dos Santos, her name has been removed from a list of participants preparing to meet in Davos this week for the World Economic Forum’s annual gathering of business and political leaders. Her company Unitel had paid to be a sponsor. The event’s organisers said they were “re-evaluating” Unitel’s participation.