London: Rupert Murdoch received his first doze of the Pfizer COVID-19 vaccine this week at a clinic near his Georgian mansion in Oxfordshire, after the 89-year-old media mogul received a call from his local doctor to say he was eligible.

Murdoch, executive chairman of News Corp, has been isolating in Britain with his wife Jerry Hall since summer, according to a statement released by his company. 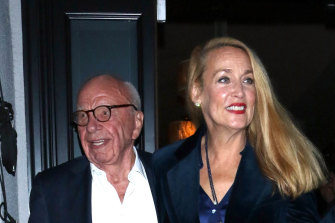 Rupert Murdoch and Jerry Hall, pictured in November 2019, have been isolating at their Georgian mansion in OxfordshireCredit:Getty Images

In the statement, he thanked Britain's National Health Service.

"I would like to thank the keyworkers and the NHS staff who have worked so hard throughout the pandemic, and the amazing scientists who have made this vaccine possible," he said. "I strongly encourage people around the world to get the vaccine as it becomes available."

Nearly 140,000 people have received their first dose of the Pfizer vaccine in Britain since roll out began on December 8, including octogenarian actor Sir Ian McKellen, 81, who played Gandalf in the Lord of the Rings trilogy. People aged over 80 are the highest priority group.

The NHS posted several pictures of McKellen in a blue T-shirt and a rainbow striped scarf, giving a thumbs up as he received the shot.

"It's a very special day. I feel euphoric," McKellen, 81, was quoted as saying in one NHS post which he retweeted. "I would have no hesitation in recommending it to anyone. I feel very lucky to have had the vaccination."

It is not known whether Queen Elizabeth, 94, and her husband Prince Philip, 99, have had the vaccine yet. The Times reported they may "let it be known" once they have.

British Prime Minister Boris Johnson has urged families to keep Christmas celebrations small to protect the elderly, with some cabinet ministers fearing that relaxed restrictions this week will create another surge in infections and deaths.

"We're worried about the effects of Christmas," a Cabinet minister told the London Telegraph. "We have to minimise the impact going into the new year."

Asked if he could rule out a third lockdown, Johnson said: "We are hoping very much we will be able to avoid anything like that but the rates of infection have increased very much in the last few weeks.

"So what we're saying to people now over this Christmas period is think of those rules about the three households that you can bubble up with, the five days, that is very much a maximum, that's not a target people should aim for.

"People understand this is the time to think about our elderly relatives, avoid spreading the disease, keep it short, keep it small."

The London Telegraph is reporting that AstraZeneca's Oxford vaccine is likely to be approved in the UK within days of Christmas, kick-starting a drive to jab millions of people a week from the start of January.

Government sources who were not cleared to speak on the record told the London Telegraph that Britain is on course to vaccinate the 20 million most vulnerable by March, allowing for a possible relaxing of some restrictions, with the prospect of the whole country having the vaccine by summer.