Saudi Arabia will punish online satire with up to five years in prison and is seeking the death penalty for a prominent cleric.

The kingdom’s public prosecutor said today satire that ‘disrupts public order’ would be punished, as the country cracks down on dissent.

Crown Prince Mohammed bin Salman, the kingdom’s powerful ruler, has drawn harsh criticism from rights groups over the targeting of human rights activists and political dissidents across the spectrum since his appointment in June 2017.

Dozens of Saudi citizens have been convicted on charges linked to dissent under a previous sweeping law, particularly linked to posts on Twitter. 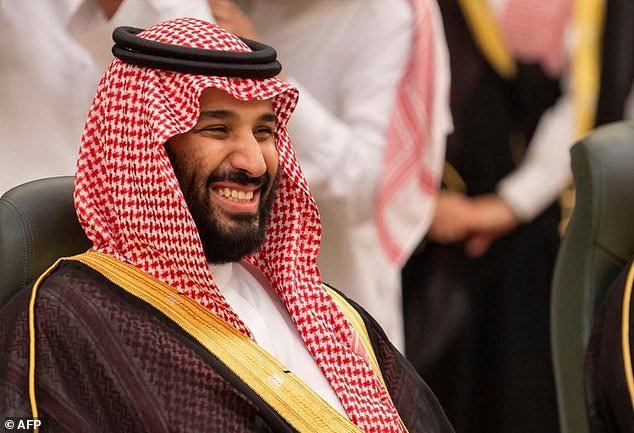 In September 2017, authorities issued a public call for citizens to report on the social media activities of their fellow citizens, under a broad definition of ‘terrorist’ crimes.

Saudi Arabia’s public prosecutor today also announced it was seeking the death penalty in the case against Sheikh Salman al-Awda, a prominent Islamist cleric arrested last year along with 20 others.

The preacher was arrested on terrorism-related charges, activists and his family said.

The kingdom’s legislation on cybercrime has sparked concern among international rights groups in the past.

The public prosecution tweeted late last night: ‘Producing and distributing content that ridicules, mocks, provokes and disrupts public order, religious values and public morals through social media… will be considered a cybercrime punishable by a maximum of five years in prison and a fine of three million riyals ($800,000).’

The 37 charges against the 61-year-old cleric in the Specialized Criminal Court include spreading discord and incitement against the ruler, according to London-based Saudi rights group ALQST and other activists.

Awdah’s son, Abdullah, confirmed the court proceedings and said the accusations against his father included critical tweets and establishing an organisation in Kuwait for defending the Prophet Mohammad.

The Al Saud family that rules the kingdom has always regarded Islamist groups as the biggest internal threat to its rule, in which an al Qaeda campaign a decade ago killed hundreds.

In the 1990s, the Brotherhood-inspired Sahwa (Awakening) movement demanded political reforms that would have weakened the ruling family.

Awdah, a Sahwa leader, was imprisoned from 1994 to 1999 for agitating for political change.

Criticism of the ruling family earned him praise from Osama bin Laden, whom he eventually denounced.

The Sahwa movement was later undermined by a mixture of repression and co-optation.

In 2011, he called for elections and separation of powers, principles antithetical to strict Islamist ideology. He has since been largely quiet on issues of domestic reform.

The authorities recommended the death penalty last month for five human rights activists from the kingdom’s Eastern Province, including Israa al-Ghomgham, the first woman to possibly face that punishment for rights-related work

Amnesty International’s Saudi Arabia campaigner Dana Ahmed called the reports ‘a disturbing trend in the Kingdom (that) sends a horrifying message that peaceful dissent and expression may be met with the death penalty’.

A government communications office did not immediately respond to a request for comment.

Saudi Arabia, an absolute monarchy where public protests and political parties are banned, has seen a crackdown on dissent, with dozens of clerics, intellectuals and activists arrested in the past year, even as the authorities enacted some high-profile social and economic reforms.

A roundup of senior royals, ministers and businessmen last November on charges of corruption sent shockwaves through the kingdom, stunning allies and foreign investors. Most of those detainees were released after reaching undisclosed financial settlements with the government.

Awdah, whom UN experts have described as a ‘reformist’ and an influential religious figure who has urged greater respect for human rights within Sharia, was arrested in September 2017.

He had previously criticised the government but more recently kept silent or failed to publicly back Saudi policies, including a rift with Qatar over supporting the Muslim Brotherhood.

Awdah is the assistant secretary-general of the International Union of Muslim Scholars, listed in Saudi Arabia as a terrorist organisation.

The organisation is based in Doha and is also listed as a terrorist entity in Egypt, the UAE and Bahrain, which together with Saudi Arabia have imposed a blockade on Qatar since June 2017, accusing it of supporting terrorism.

Qatar denies the allegations and says the Saudi-led bloc is attacking its sovereignty over its independent foreign policy.