Home » World News » ‘She had lost over 15 pounds, and she is sustaining hair loss’: Ghislaine Maxwell’s lawyers and Federal Bureau of Prisons clash on Maxwell’s conditions in new court documents 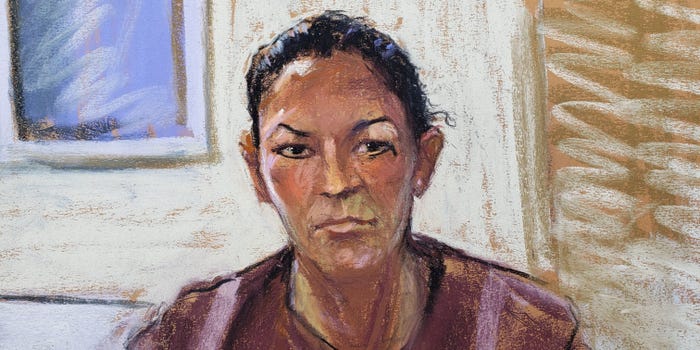 According to new court documents, Jeffrey Epstein associate Ghislaine Maxwell's legal team is alleging that Maxwell's health is continuing to deteriorate and that she is shedding weight and losing hair due to unhealthy conditions.

"While her weight may currently be fairly consistent, she had lost over 15 pounds, and she is sustaining hair loss," Bobbi Sternheim, one of Maxwell's attorneys, wrote in the letter.

The letter included a host of other allegations, claiming that she has been restricted from using a toothbrush at times and repeating claims that Maxwell has been exposed to COVID-19 by guards at the Metropolitan Detention Center in Brooklyn. Last week, the New York Daily News reported an outbreak of 55 new COVID-19 cases at the MDC.

"While flashlight checks may be performed during regular rounds, Ms. Maxwell is subject to such checks every 15 minutes," Sternheim wrote in the letter, which was addressed to US District Judge Alison Nathan, who is in charge of Maxwell's sex-trafficking case.

The new court filing was responding to a letter sent today from lawyers for the Federal Bureau of Prisons, which oversees MDC, that claimed that Maxwell is served three regular meals a day and has maintained her weight around 134 pounds. Attorneys for the BOP said Maxwell's health is sound and her conditions are regular and rejected claims that Maxwell has been in unusually restrictive conditions.

Sternheim, in reply, wrote that Maxwell's meal plan was not in compliance with BOP's own policies for her first six weeks in detention, but that now her meal plan was. Maxwell's lawyers claimed she has been denied access to recreational activities, which BOP denied in their letter.

Sternheim said that Maxwell was "bearing the brunt of BOP incompetence," adding that the frequent check-ups were "extraordinarily onerous conditions of constraint on Ms. Maxwell to avoid the catastrophic consequences of negligence occurring at the MCC that resulted in the death of Jeffrey Epstein."

Separately, Maxwell's attorneys are redoubling their efforts to allow bail to be posted for Maxwell.

In unsealed court documents, Maxwell's lawyers asked Judge Nathan to hold a private hearing to review potential bail conditions due to "sensitive and private information that, if made public, would be highly damaging to both Ms. Maxwell and third parties." Mark Cohen, one of Maxwell's lawyers, claimed that the goal was to protect Maxwell's friends and family.

Nathan unsealed the letter, but agreed to redact the names of friends and family, and would not agree to seal the entire filing.

Maxwell was arrested in July on charges of "enticing a minor to travel to engage in criminal sexual activity, transporting a minor with the intent to engage in criminal sexual activity, conspiracy to commit both of those offenses, and perjury in connection with a sworn deposition," according to federal prosecutors. Maxwell has pleaded not guilty to the charges that are related to her alleged role in recruiting and sexually abusing girls and women with Epstein.

Epstein was charged with sex trafficking-related offenses before he died by suicide in 2019 while in federal prison. He had pleaded not guilty to the charges.

Maxwell has been in MDC custody since her arrest on July 2, where prosecutors said they found her hiding in a New Hampshire home. Judge Nathan denied a $5 million bond in July. If convicted at her scheduled July 2021 trial, Maxwell faces up to 35 years in prison.