Parts of Britain could be hit by heavy rain, snow and sub-zero temperatures tomorrow as voters head to the polls.

A band of rain will move across England from the west, hitting the Westminster area from lunchtime, while wintry spells could hit eastern parts of Scotland on what is the first General Election in December since 1923.

The Met Office said snow is ‘likely’ over northern hills tomorrow with temperatures expected to drop to freezing and below tonight in parts of eastern England including London, and Scotland.

Five flood warnings for some coastal areas in the South West and North East of England have been issued by the Environment Agency, on top of a further 40 flood alerts across the country.

This morning will be mostly dry and sunny in the East, but cloudy with showers and possible hail in the West. There will be sunny spells and showers in the afternoon, many of which will be wintry over northern hills. 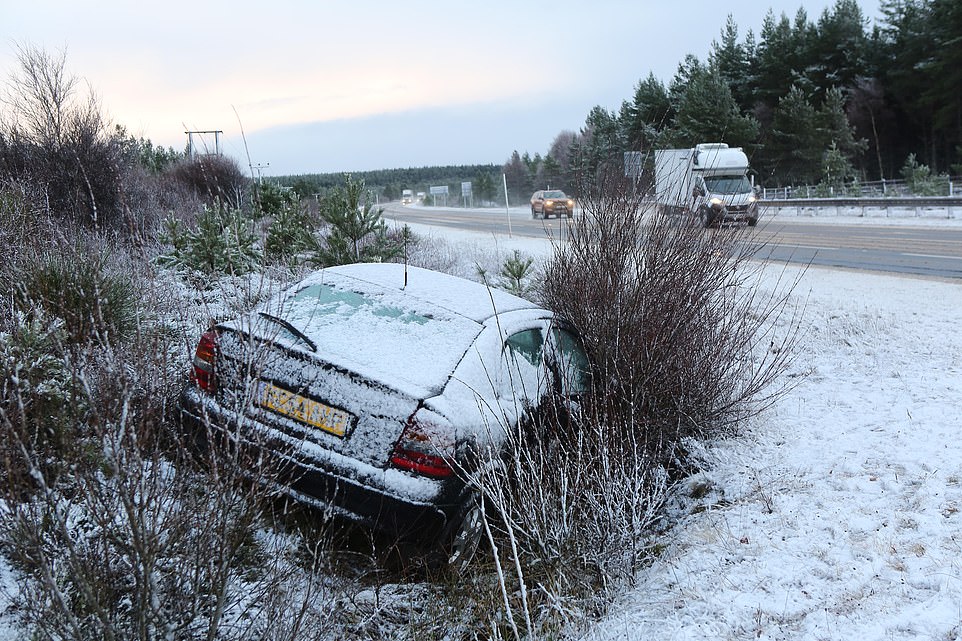 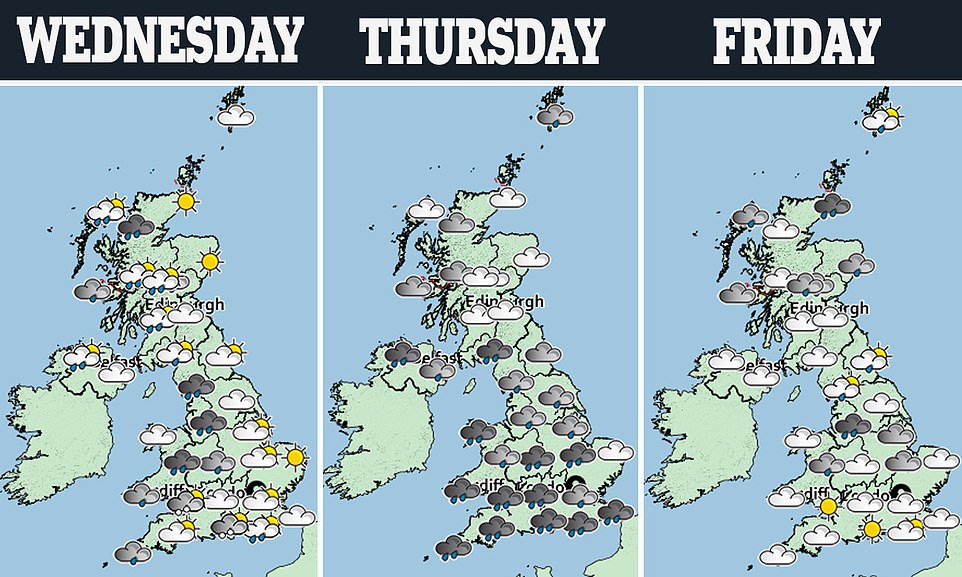 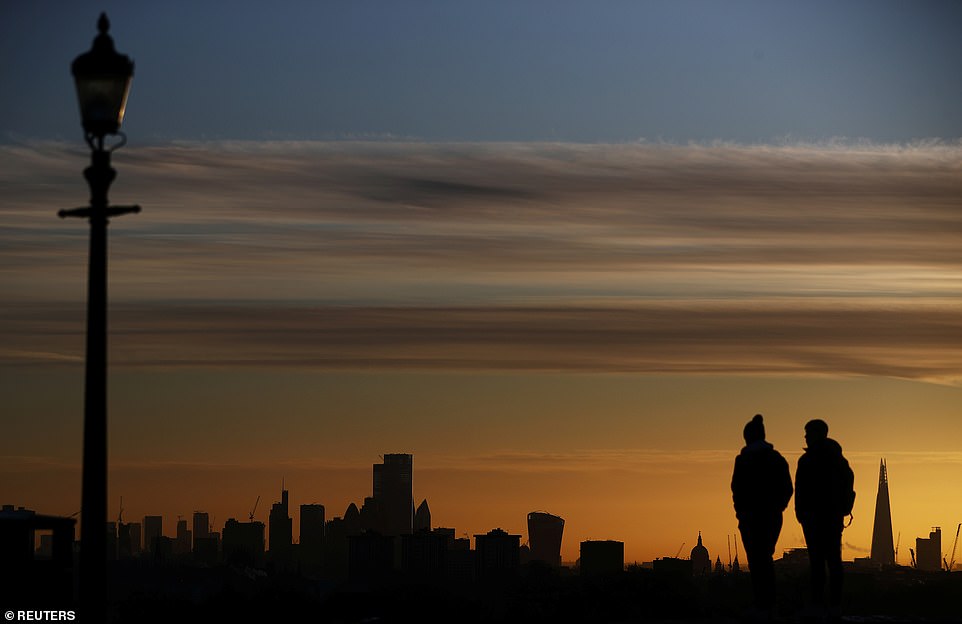 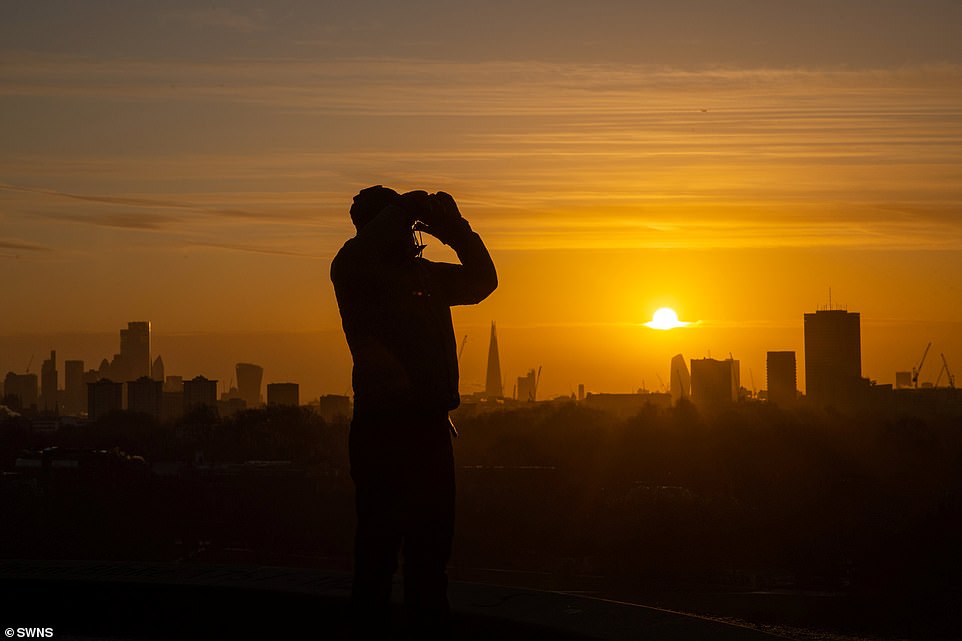 Craig Snell, senior meteorologist at the Met Office, said the rain is due to ease by midday today, when it will be dry and bright across much of the UK. He said: ‘Despite the sunshine, it will be feeling fairly chilly out there.’

South-easterly areas will see the highest temperatures of up to 9C (48F) today while temperatures of between 4C (39F) to 7C (45F) are expected for the rest of the country.

Icy patches and wintry showers may lead to some travel disruption in Scotland today, where a weather warning was in place throughout the night until this morning.

Tonight will be mostly dry and clear but there will be wintry showers in western Scotland and light rain in Wales and western England. After midnight rain will spread into western areas, possibly turning to snow over hills.

It will be mostly cloudy in the morning tomorrow with rain spreading eastwards. Eastern parts of England will be mainly dry in the early morning, while snow is likely over northern hills but may turn to rain later.

Friday will be cloudy with showers for most, especially along North Sea coasts, although bright spells may develop in the south. On Saturday it will be bright with showers, which will be heaviest and most frequent in the West. 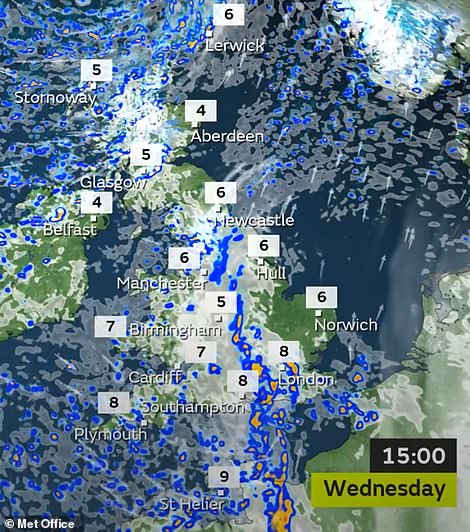 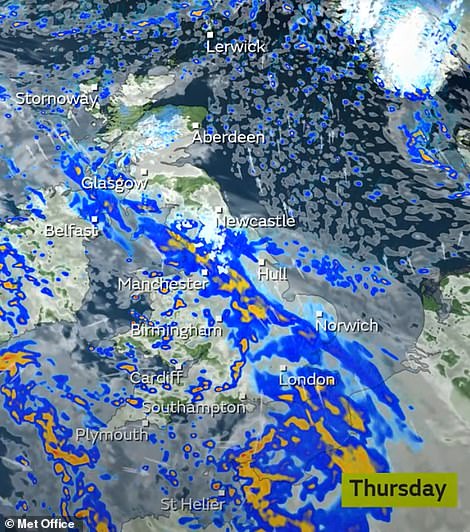 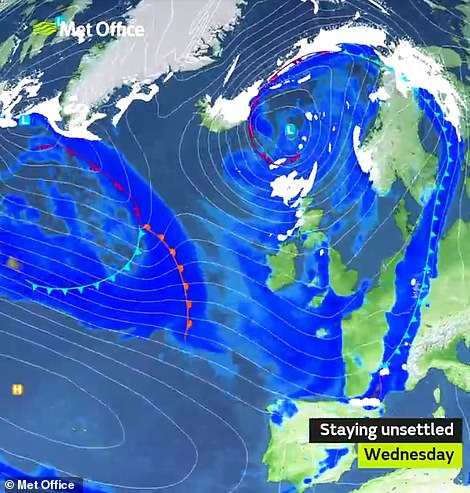 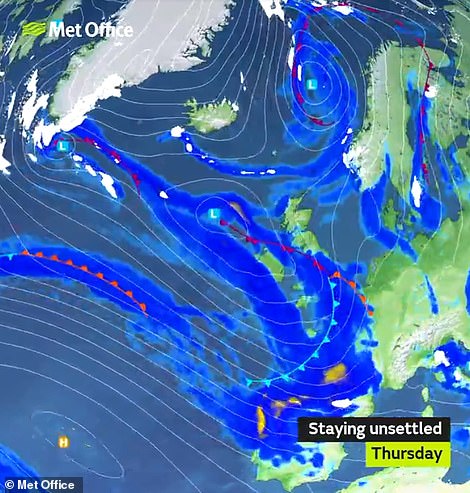 Wintry spells could hit eastern parts of Scotland tomorrow, the region home to the closest seat in the country: North East Fife, where the Scottish National Party are defending a majority of just two.

The Met Office is predicting showers in the region, some of which could have ‘a wintry side’, according to meteorologists. One candidate expressed concern bad weather could affect turnout in the ultra-marginal.

Liberal Democrat candidate Wendy Chamberlain said: ‘I think it’s going to be very interesting in terms of voter turnout. There is one part of the constituency near the north, Gauldry, and we were going up it.

‘I said if it’s snowing on December 12, this is probably a place we’re not getting to. I think it means that postal votes will be quite critical and a lower turnout might have an impact as well.’

The Perth and North Perthshire constituency, currently held by the SNP, has a majority of just 21 votes going into Thursday’s election and could also face some winter weather.

Talking about the weather in Perth and Fife tomorrow, Mr Snell said: ‘It’s going to be a chilly start, temperatures will have fallen down to near freezing overnight. 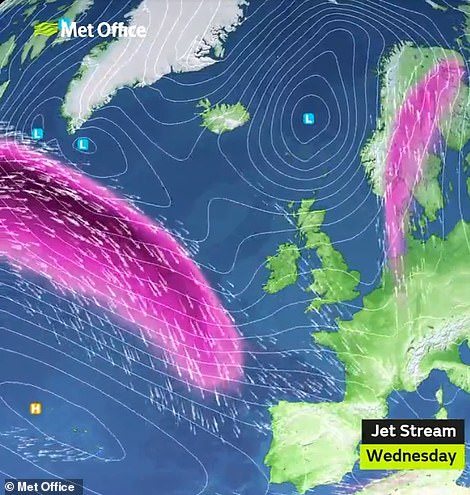 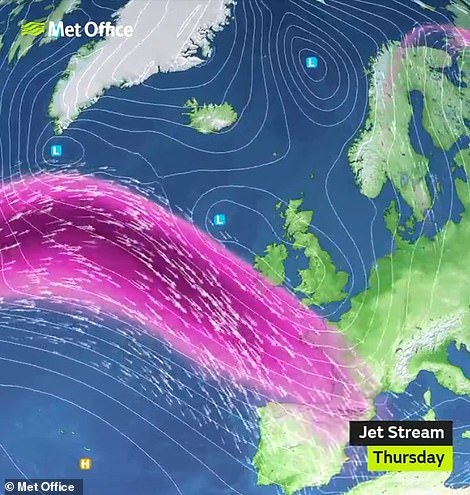 The Atlantic jet stream, a core of strong winds above the Earth’s surface, is moving position to over the South West of England 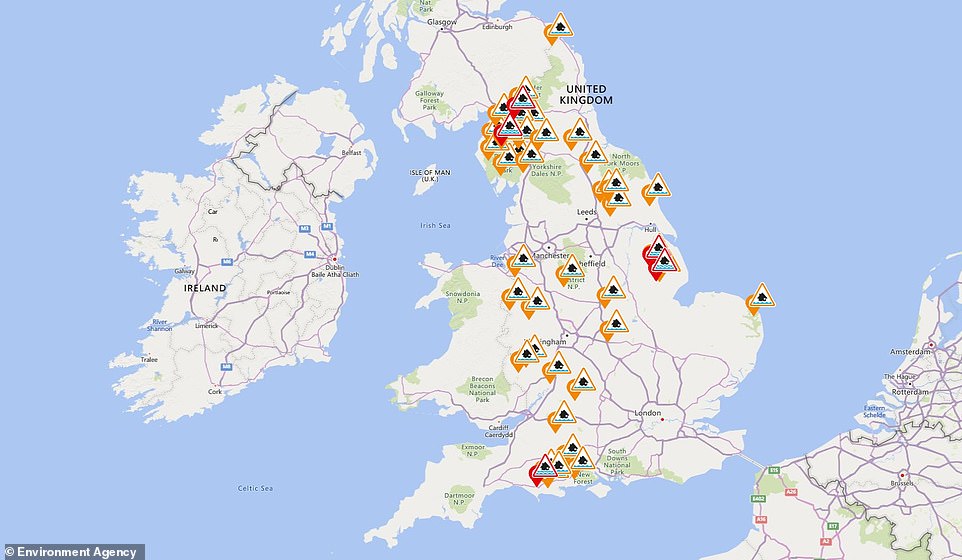 ‘Through the course of the day there will be a few showers around, but compared to England it should be dry. Some will have a wintry side across higher ground, but across lower levels it will be falling as rain.’

Voters in Perth and Fife will experience maximum temperatures of around 5C (41F) and, in the morning, hovering around the freezing mark.

Two other close constituencies further south – Glasgow South West and Glasgow East – are both held by the SNP with majorities of 60 and 75 respectively.

‘We’ve got a greater chance of seeing showers in Glasgow than we have in the east, but compared to England, looking a lot dryer. The main band of rain across central parts of the UK shouldn’t reach Glasgow until midnight and most will fall as rain.’

Ultra-marginal constituencies in England could also see some bad conditions as wet weather moves north throughout the country. 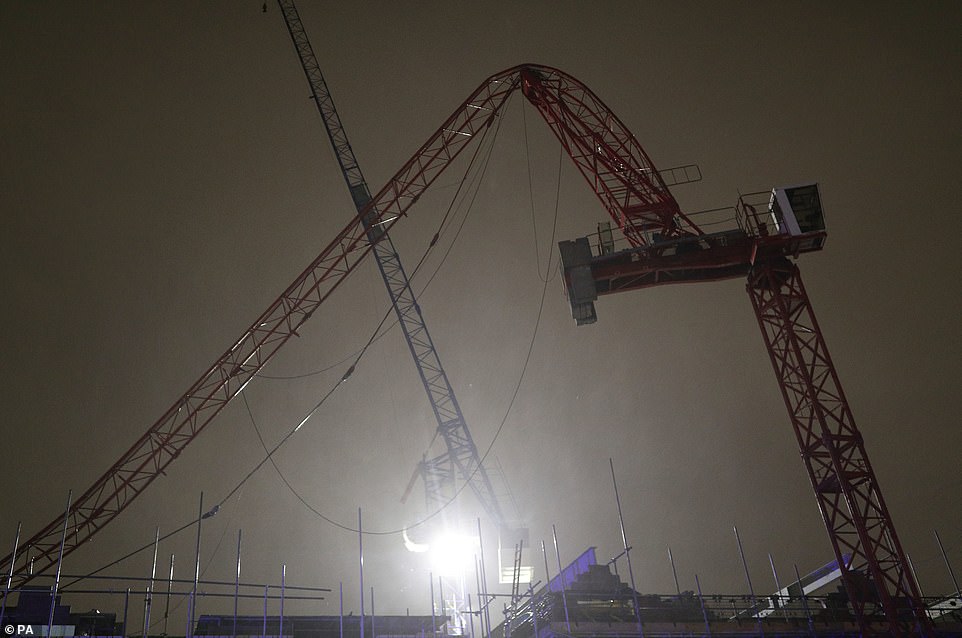 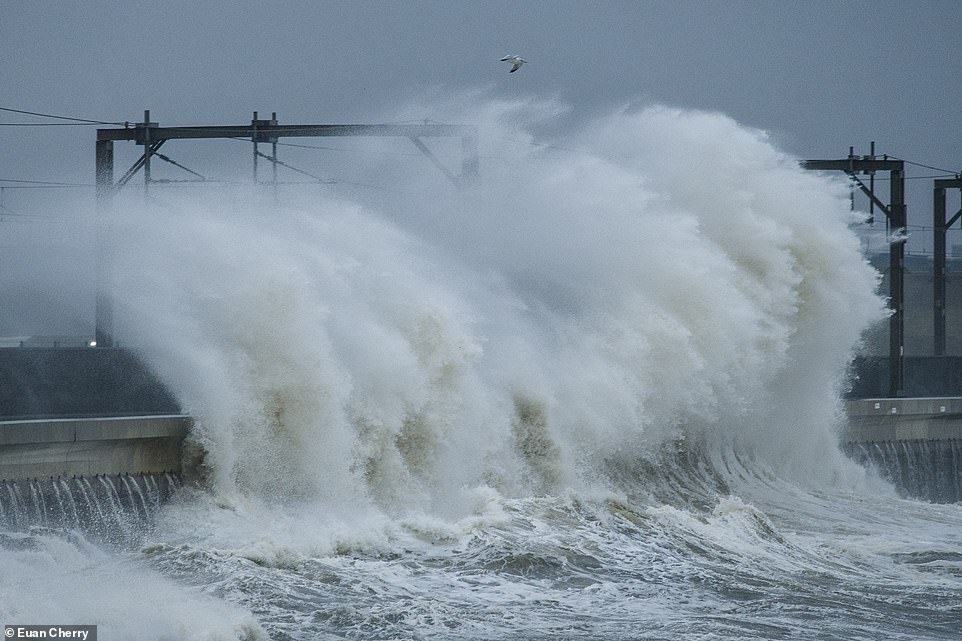 Kensington – with a Labour majority of 20 – and Richmond Park – with a Conservative majority of 45 – will have wet conditions as a band of rain moves towards London throughout the morning.

Mr Snell said about London: ‘[It will] start off cold but dry and bright, but as we go through the course of Thursday, we’re going to see a band of rain moving through from the west, reaching London around lunchtime.’

Dudley North, with a Labour majority of 22, will also see periods of wet weather throughout the morning, Mr Snell said, adding: ‘in the afternoon, a dry spell before further rain arrives at the end of Thursday.’

However, one academic does not think bad weather has an adverse effect on turnout and results.

Chris Hanretty, a politics professor at Royal Holloway University, found no significant statistical link between rain on the day of the EU referendum in 2016, and voter turnout.

He wrote on Twitter: ‘The effects of weather on turnout are small, if they exist, and the effects on vote share are tiny. Less than one fifth of 1 per cent in an extreme case.’

It was previously thought that yesterday would bring Storm Brendan to the shores of the UK but the Met Office said there was not enough of an impact from winds to warrant a storm name.

Turbulent air from Storm Attiyah caused ‘mountainous seas’ off the coast of Ireland on Sunday, according to the Irish Met Office, and 70mph winds have swept the UK since.

Police officers were called to a partially collapsed crane in Kingston-upon-Thames, South West London, yesterday afternoon. The collapsed machinery, on a building site, is not thought to have caused any injuries.