Washington: There are a million questions after two people close to President Trump during the 2016 campaign were convicted of or admitted to crimes within an hour of each other Tuesday: Why did Trump's former lawyer and fixer, Michael Cohen, turn on the president so sharply? Will Trump's former campaign manager, Paul Manafort, face a retrial for the 10 of 18 charges he wasn't convicted of? How will this news affect the midterm elections in November? 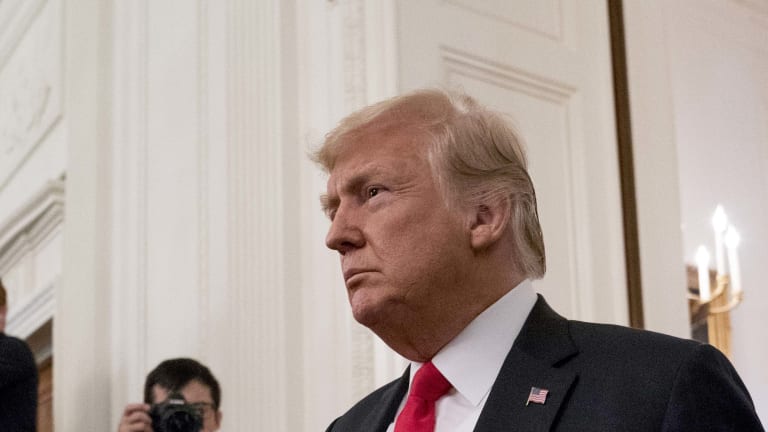 But Tuesday's massive legal drama raises even bigger questions that involve the president's potential legal jeopardy and the future of the independent investigation into Russian election interference. Such as:

1. Did Trump commit a crime?

Standing Tuesday in a New York courthouse, Cohen said the magic words, admitting to a crime: "I participated in this conduct . . . for the principal purpose of influencing the election." Meaning, he didn't pay off two women alleging affairs with Trump out of the goodness of his heart and then not report it. He did it specifically to help Trump win the election, which is illegal.

Cohen didn't implicate just himself. Cohen said he made these payments at the direction of Trump. That would seem to enjoin him and Trump in these campaign finance charges. 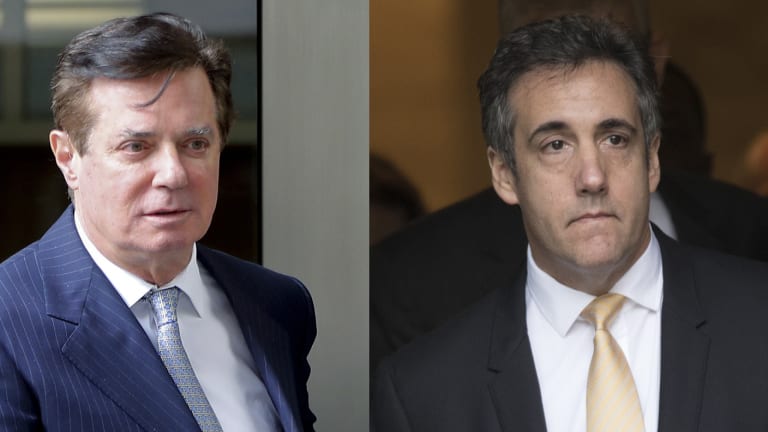 Trump has since acknowledged reimbursing Cohen for one of those women's payments, and he's on tape appearing to talk about the other. But he denies telling Cohen to do these things.

We may never know if Trump committed a crime because a decades-old Justice Department opinion says you can't indict a sitting president. Prosecutors could try to challenge it, but The Post spoke with a number of legal experts who are doubtful they would, or that it would work.

2. How is Trump's company implicated in all this?

It's not just the president who got pulled into Cohen's convictions. Legal filings from the case revealed that executives at the Trump Organisation OK'd $US420,000 in reimbursements to Cohen to pay of these women, then tried to hide the true nature of those payments by describing them as legal fees and retainers. Prosecutors say Cohen even got a $US60,000 bonus for his work trying to keep these women quiet during the election. That could be legally problematic if a court viewed this as this yet another unreported in-kind contribution to Trump's campaign, this time by a corporation and well above the limit.

3. What else does Cohen know about Trump?

Cohen's plea deal didn't specifically say he'd help out with investigations into the president, but it's pretty clear he wants to.

Cohen's lawyer Lanny Davis – yes, lawyers have lawyers at this point — dangled this tantalising nugget Tuesday on MSNBC: Cohen has more information that special counsel Robert Mueller might be interested in. Since Cohen's case was handled by prosecutors in New York and not the special counsel, a likely translation is: Cohen knows Russia stuff.

Davis said that included the "computer crime of hacking" and "whether Mr. Trump knew ahead of time about that crime and even cheered it on."

He also said Cohen might go before Congress to testify.

This might all be bluster. The Post reports that Mueller has determined Cohen isn't necessary to the special counsel's work. Another possibility is that Cohen knows something that Mueller doesn't know Cohen knows.

In exactly a week, Manafort will be back in court in Virginia to be sentenced. He could spend decades in jail after being convicted of eight of 18 counts of bank and tax fraud. And that's just the beginning of Manafort's legal troubles.

We don't know if Mueller will try again to prosecute the other 10 charges the jury was hung up on. Plus, Manafort faces a separate trial on related charges in Washington later this month.

Legal experts think Mueller tried to throw the book at Manafort to get him to share what he knows. Now that Manafort will likely face serious jail time, will he?

Five Trump associates have now pleaded guilty or been charged with crimes in Russia-related or spinoff investigations. Manafort is the only one who didn't take a plea deal, and a big unanswered question is: Why? Instead of trying to lessen his sentence to cooperate with Mueller on what he knows about the Trump campaign and Russia, Manafort went to trial and now could spend the rest of his life in prison.

Enter Trump. The president has publicly said a couple times since Manafort's conviction that Manafort is a good or brave man.

He praised the fact Manafort didn't "break" like the others. Trump previously has been willing to wield his pardon power for controversial figures. Even though it likely would be politically very hard to defend, would Trump do it for Manafort?

6. Will Trump get impeached?

Congress is the other big player in all this because it can punish Trump when a court of law can't. Observe how Republicans react to Trump's escalating political and legal problems. Will they stand by him? Will they pass a stalled bill to protect Mueller from being fired by Trump? What will they do if Trump tries to fire other top Justice Department officials in an effort to blunt the Mueller probe? If the party has a thorough plan for these scenarios, they aren't sharing what it is.

It may not be on their shoulders much longer. If Democrats take back control of the House in November's midterm elections, it's their party that will have to decide what to do with Trump. Specifically: Do they start impeachment proceedings?