Sleep ‘is not an option’: Stressed out Elon Musk responds to Uber’s Arianna Huffington urging him to cut back on his ‘120-hour work weeks’ after he reveals the pressure is taking an incredible personal toll on him

Elon Musk pushed back against fellow entrepreneur Arianna Huffington’s suggestion that he start implementing a healthier work-life balance, saying with the demands at Tesla that slowing down simply ‘isn’t an option’.

Huffington, who sits on the board of Uber, took to her Thrive Global website and posted an open letter to Musk in response to his interview in the New York Times in which he says he works 120-hours-a-week and that the pressures of Tesla have taken an incredible personal toll on him.

In a tweet at 2.32am, after arriving home from a late night at a Tesla factory, Musk told the Huffington Post founder that his electric car company and Ford are the only two American automakers that have avoided bankruptcy. 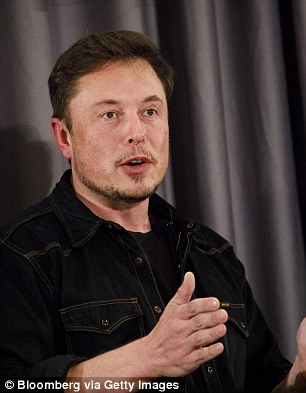 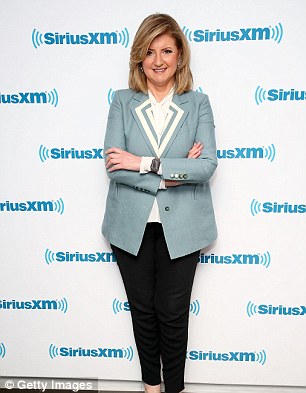 Tesla CEO Elon Musk revealed he is under enormous stress in his work with the company, that he isn’t seeing his children, he worked straight through his birthday and almost missed his brother’s wedding this year while finishing production on the Model 3. Arianna Huffington (right) urged him to slow down and rest more, saying you can’t just push through 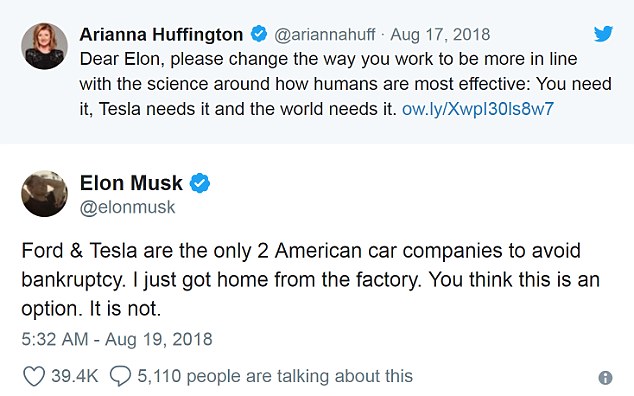 He then added, in an apparent reference to his long hours at work: ‘You think this is an option. It is not.’

In his interview with the Times last week, he said of his push to finish production of the mass-market Model 3, ‘I thought the worst of it was over, I thought it was. But from a personal pain standpoint, the worst is yet to come.’

Huffington implored him in her post on Friday, ‘You can’t simply power through – that’s just not how our bodies and our brains work.’

‘You’ve had days-long stretches where you shut yourself inside the Tesla factory and don’t even go outside. You don’t take vacations. There’s no way you can connect with your amazing vision and creativity when you don’t give yourself time to reconnect not just with those you love but also with yourself and your wisdom,’ she added.

The Tesla head’s tweets have become increasingly worrisome over recent months. Two incidents in particular standout with the first being an attack on one of the two divers who rescused a stranded soccer team trapped in a cave, calling him a ‘pedo-guy’ or pedophile.

The most recent, however, saw Tesla stocks soar when he shared ‘Am considering taking Tesla private at $420. Funding secured,’ on August 7. The trading day closed with the company’s stock gaining 11 per cent.

That announcement on Twitter prompted lawsuits and reports of government scrutiny.

Funding was not secured: Musk tweeted this on August 7, which saw Tesla stock soar 11 per cent by end of the days trading but resulted in government scrutiny as to why he would tweet what would be major company news that was not accurate during a trading day

Musk conceded in his wide-ranging interview that he’s overwhelmed by job stress and sometimes takes Ambien to get to sleep.

Tesla has presented plenty of challenges for Musk. The company routinely loses money and is burning through cash as it ramps up development of its Model 3 sedan, a less-expensive electric car it hopes appeals to the mass market.

A large number of investors known as short-sellers have bet against the company.

Musk has added to those pressures with lofty projections for profits and production that the automaker often fails live up to. Plus, the eccentric billionaire is the head of at least two other companies, including the rocket company SpaceX.