Two men survived a horror crash which saw their small plane hurtle more than 1,000ft onto a busy road and narrowly avoid cars and a pedestrian during a test flight.

Pilot Fábio Reis, 35, and his passenger, Alessandro Cunhago, 33, were able to crawl out of the wreckage after their plane came down in Guabiruba, Brazil, following a suspected engine failure on Saturday at around 10.30am.

Terrifying CCTV footage shows the plane crashing to the ground at an angle and hitting a wall, breaking into several pieces on impact but leaving the cab partially intact. 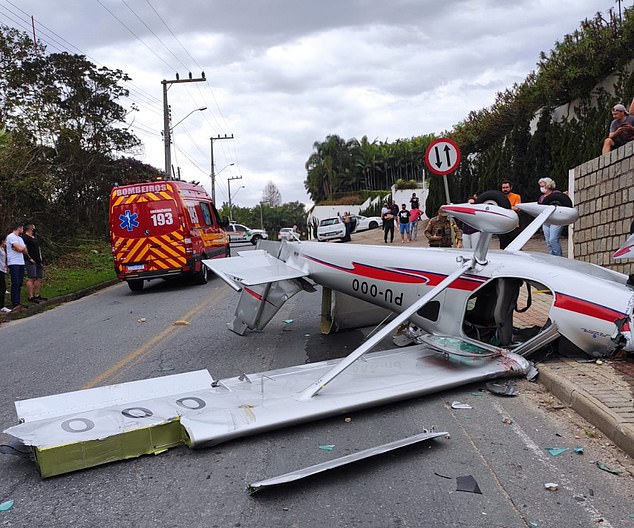 The pilot and passenger miraculously survived as their plane crashed onto a road in Guabiruba, Brazil 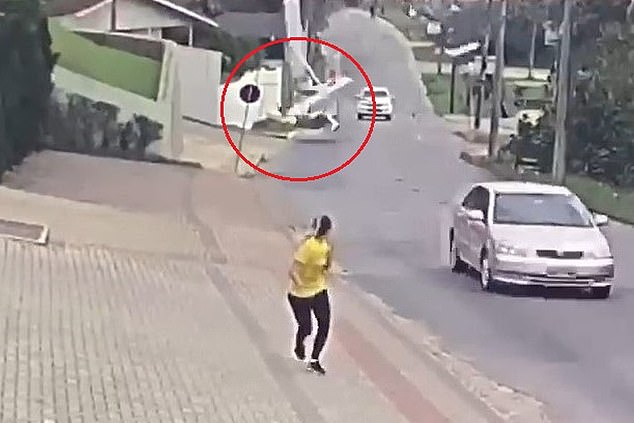 The small aircraft comes down at an angle and lands upside down, narrowly avoiding four cars and a women on the pavement

A woman walking just a short distance ahead is at first unaware of the incoming aircraft but quickly turns around startled as she hears the plane heading towards her just before it hits the ground.

She stares on at the wreckage, clearly shocked, as a car on the road pulls over to help.

Miraculously, the light aircraft manages to avoid four cars and lands upside down in the road.

A man can be seen being treated by medics next to the plane before being put onto a stretcher and carried away as locals watch on.

The light aircraft tried to make an emergency landing after losing altitude but hit overhead electrical cables as it descended.

To the amazement of rescuers in Brazil, the pilot Mr Reis and Mr Cunhago crawled out of the wreck on their own before help arrived.

Onlookers said the occupants were fortunate to escape alive particularly as the plane didn’t catch fire from escaping fuel.

Paramedics said they arrived to find the pilot standing disorientated beside the upturned aircraft. He had abrasions, suspected internal bleeding and fractured ribs. 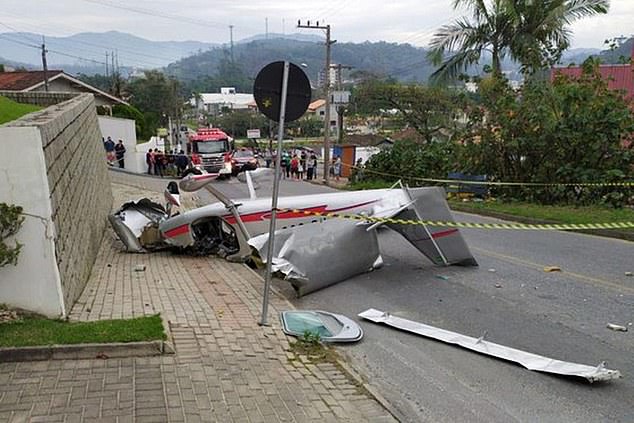 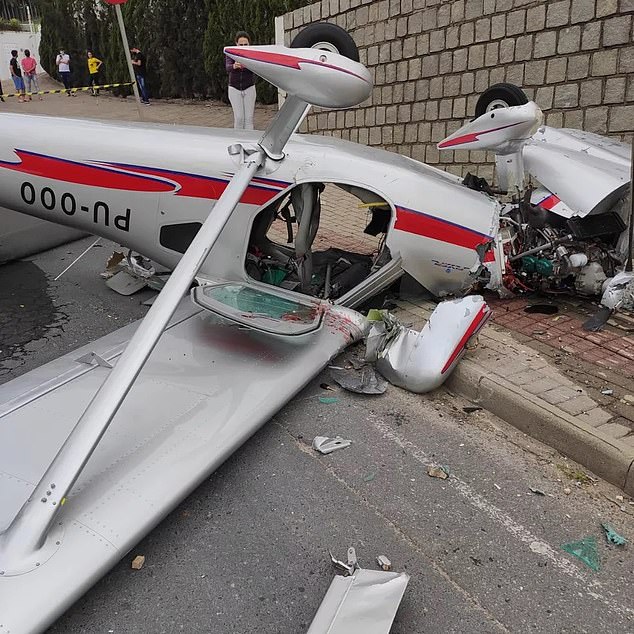 Despite the terrifying crash, the two men were able to crawl out of the cab and were helped by the emergency services

The passenger, who is also a trained pilot, was found sitting on the sidewalk, complaining of a pain in his neck and lower limbs.

He had suffered lacerations to his face and a suspected broken jaw. Both he and the pilot were stretched to hospital.

The aircraft, a Kolb Flyer model, landed upside down on impact with two of its three wheels still attached. The propeller and engine were completely destroyed.

The victims had left the Brusque aerodrome about an hour before the incident and crashed some 12 miles away.

Businessman, Mr Cunhago, had been planning to buy the plane and was taking a test flight with Mr Reis when the accident happened.

Brother of the pilot, Amilton Reis, who owns the airfield where the plane took off, told online media G1, he was astonished and ‘eternally grateful’ that the victims had survived.

He revealed that he had spoken to his brother and said: ‘There appears to have been a breakdown in the engine and they tried to restart the aircraft as it lost altitude.

‘They rapidly realised that there was no other way than to try to make an emergency landing and position the plane so it could set down on the road.

‘But as it descended it hit an electrical wire and pole. There was no time after that to control the aircraft as the street was too close to stop the accident from happening.’ 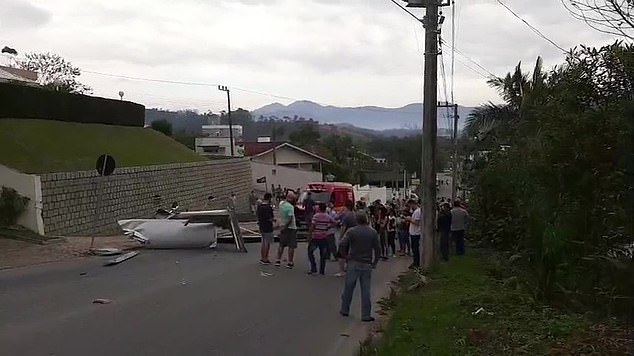 Letícia Schaefer da Silva, 31, the pedestrian startled by the crash said she was lucky to be alive because if she had left her house, for her usual walk, a few minutes later she might not have been around to tell the tale.

‘It was a huge scare. I was very traumatised at first but now I’m much calmer, more peaceful.

‘I went home crying, reflecting that life is only a breath away. Today we are here tomorrow, maybe we are not,’ the therapist remarked.

The Kolb Flyer aircraft, manufactured in 2009, has a capacity of up to 598 kg and seats a pilot and passenger.

It was up to date with its documentation according to the National Civil Aviation Agency.

The agency has launched an investigation which will involve removing parts of the aircraft for analysis, collecting data with photographic records and hearing from the victims and witnesses. The aircraft does not have a black box.

Both men remain in the Azambuja Hospital and medical staff reported that their health is stable.