The real-life Smell-O-Vision! Scientists develop a device that attaches to your VR headset and blasts AROMAS up your nose while you play video games

Whether it’s while watching the latest series of MasterChef or playing a wine-themed game, there are often times when you wish you could smell through your screen.

Now you can, thanks to a new device that sends aromas up your nose while you play video games in virtual reality.

Created by researchers in Sweden, the ‘Nosewise Handheld Olfactometer’ (NHO) can be fitted to the hand controller of the HTC Vive.

It contains liquid scents that are directed to the nostrils at various times during a game while wearing a virtual reality (VR) mask.

The system links ‘physical smells to a synthetic VR environment’ and brings the concept of ‘Smell-O-Vision’ to the 21st century.

Smell-O-Vision was a system created by Swiss professor Hans Laube in 1960 to release scents to an audience while watching a film. 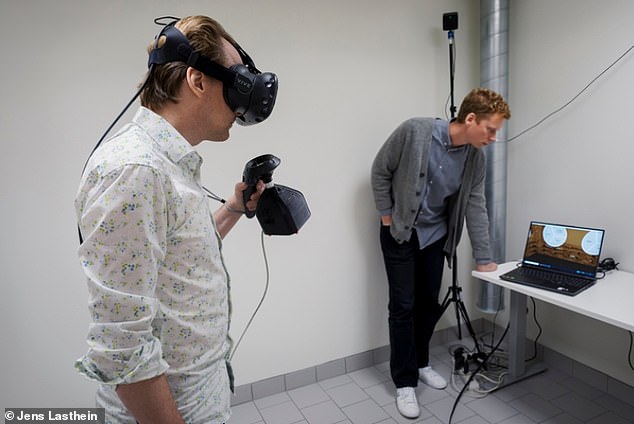 An odor machine, so-called olfactometer, makes it possible to smell in VR environments. Pictured is the Swedish research team testing the olfactometer in the lab 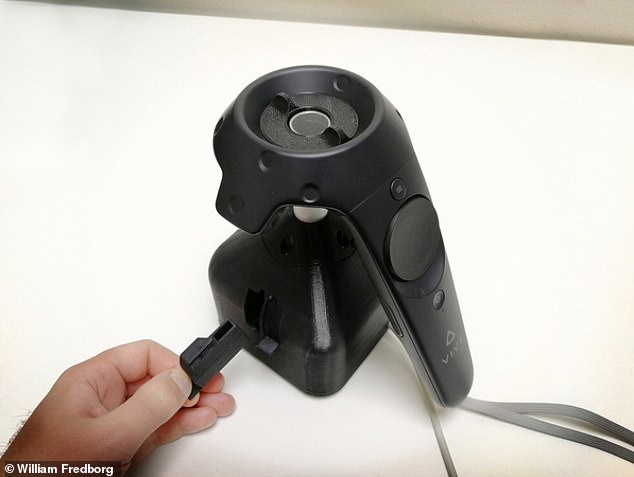 ‘Nosewise Handheld Olfactometer’ can be fitted to the hand controller of HTC Vive. It contains liquid scents that are directed to the nostrils at various times during a game while wearing a virtual reality mask.

Smell-O-Vision was a system created in 1960 by Hans Laube, and was used in cinemas during the film ‘Scent of Mystery’.

The system was fitted to cinema seats and released 30 smells at different points during the film, triggered by the film’s soundtrack.

NHO was created by psychologists at Stockholm University and detailed in a paper published in International Journal of Human – Computer Studies.

In the game, users can pick up a wine glass to sniff the contents in the virtual world, while in the real world they’re simply holding the specially-adapted HTC Vive.

‘We have utilised the opening in the HTC Vive hand controller as a channel to output scent at the hand, linking physical smells to a synthetic VR environment,’ the authors say.

‘[It] allows users to manipulate virtual objects in a VR environment and sniff them, much as one would bring a peach or a glass of wine to one’s nose in the world.

‘A user study in a virtual wine cellar game demonstrates that the device is intuitive to use and stable enough for long-term smell training sessions.’

According to the experts, a potentially important application of this technology might be to help people recover their sense of smell following virus infections that damage the olfactory system, such as Covid-19.

NHO, which contains elements that can be 3D-printed, consists of four chambers containing liquid scents absorbed into a sponge-like material.

A single fan underneath the chambers generates airflow to deliver these scents up and out the device and towards the nose.

The chambers are each sealed by valves at the top and bottom, which allows for blending of two or more scents. 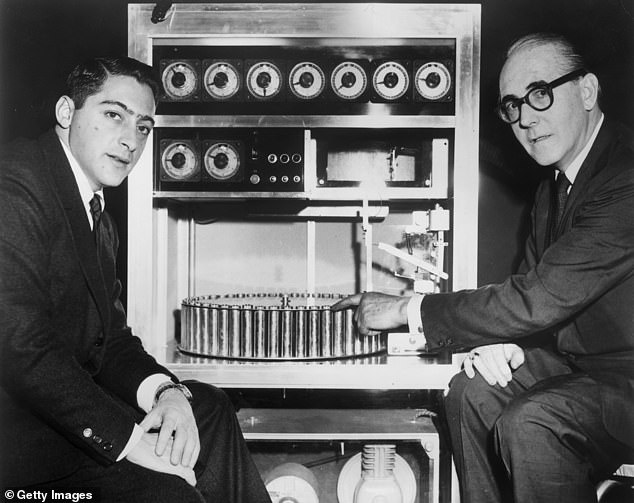 Smell-O-Vision was a system created by invented by Swiss professor Hans Laube to produce smells in synchronization with action in a film. Pictured, American film producer Mike Todd Jr (left) sits with Laube, who points to his ‘Smell-O-Vision’ machine, which was used in 1960 film ‘Scent of Mystery’, produced by Todd 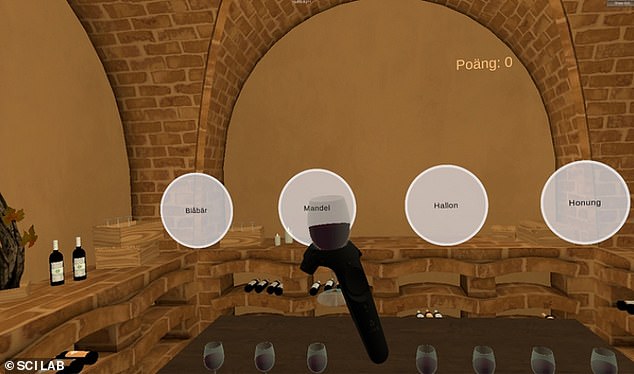 ‘Our device introduces proportional blending through stepless valves, allowing for the precise stimulus of any blend that can be created from a basic set of four available scents,’ the experts explain.

The team tried the device out using Nosewise, their wine-tasting VR game, where players smell wine in a virtual wine cellar and get points if the guess on aromas in each wine is correct.

In the game, the participant moves in a virtual wine cellar, picking up virtual wine glasses containing different types of wine, guessing the aromas. 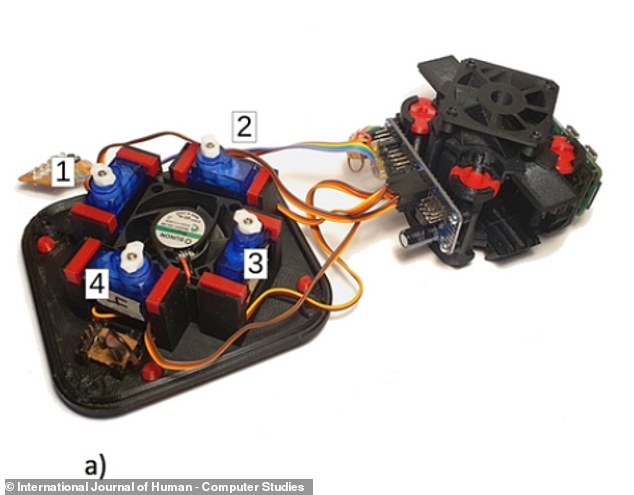 The device, attached to the bottom of a HTC controller, consists of multiple chambers, each containing liquid scents absorbed into a sponge-like material 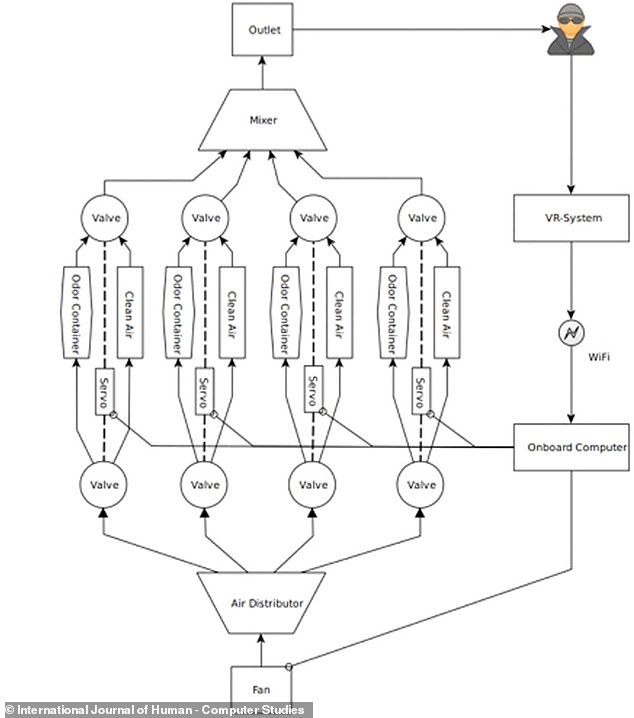 The small scent machine is attached to the VR system’s controller, and when the player lifts the glass, it releases a scent.

The player can control the four channels so that they open to different degrees and provide different mixtures of scent.

These scent blends can mimic the complexity of a real wine glass.

In addition, the wine game has different levels of difficulty with increasing levels of complexity.

In the game, users can pick up a wine glass to sniff the contents in the virtual world, while in the real world they’re simply holding the specially-adapted HTC Vive (pictured)

‘In the same way that a normal computer game becomes more difficult the better the player becomes, the scent game can also challenge players who already have a sensitive nose,’ said Olofsson.

‘This means that the scent machine can even be used to train wine tasters or perfumers.’

All code, blueprints and instructions for the machine are openly available online, as is code for the virtual wine tasting game.

But it didn’t blast aromas like wine or peaches into the user’s nostrils; instead, users could choose from a range of sexual smells, including ‘private parts’, ‘body odour’, ‘panties’ and ‘aphrodisiacs’.

Virtual reality video games really can be brought to life with scents designed to match the action, a 2022 study shows.

In experiments, volunteers played virtual reality (VR) game Resident Evil 7 Biohazard, both with and without smells that complemented parts of the game.

Scenes in the survival horror game feature intense smelling objects such as rotten food, smoke and a rotting head.

Researchers found that the addition of the smells significantly increased people’s sense of being present in the game environment.

The team say odours offer an opportunity to ‘create a more immersive experience to increase a person’s presence within a VR environment’.

‘In addition to gaming, the results have broader applications for virtual training environments and virtual reality exposure therapy,’ they write.