‘That thing’s a 6X6 for nothing!’ Souped-up truck is ridiculed as it spectacularly fails to climb a small hill

This is the hilarious moment a souped-up pickup truck with six wheels is ridiculed as it fails to climb a small hill.

The truck, a modified Ford F-250, was caught on camera in West Warwick, Rhode Island, by a bystander who gave a giggling commentary.

Footage shows the truck surrounded by puffs of tyre smoke from its spinning four rear wheels, which see the truck inch up the hill before sliding back down, prompting ridicule from the filmer. 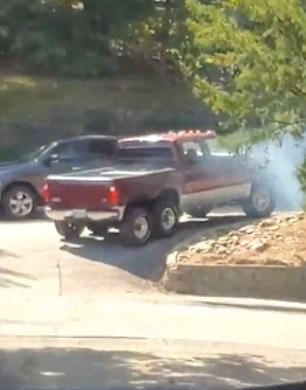 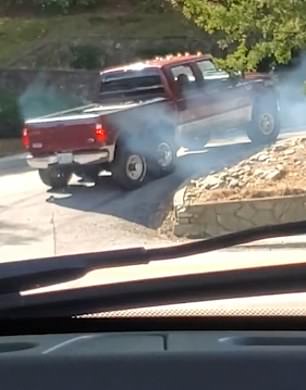 A modified F-250 pickup truck with six wheels repeatedly fails to climb a small hill in West Warwick, Rhode Island. As puffs of tyre smoke billow from its spinning wheels, the person filming from a nearby car laughs and ridicules the driver

The video starts with smoke emanating from the stationary truck, which is perched awkwardly on the corner of the hill.

When the truck’s driver tries to accelerate and its rear wheels spin once more, sending further smoke clouds billowing into the air, the main shouts, ‘Ahahah, that thing is a 6×6 for nothing!’

The truck then rolls back down the hill, beyond the tiny distance that it has covered.

The filmer exclaims, ‘Look at this!,’ before the truck driver accelerates forcefully up the hill again.

The truck covers a bit of ground but as it as the hill gets steeper it stops and the rear wheels spin violently. 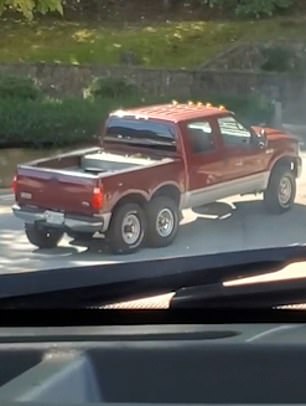 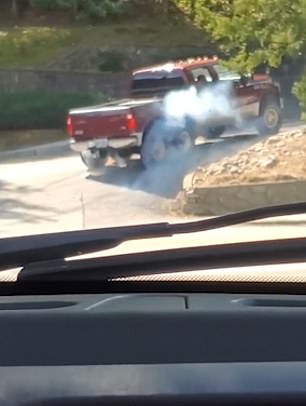 The truck then rolls back down the hill to where it is less steep and then accelerates violently.  The truck makes some immediate progress but as soon as it hits the steeper incline it stops and its rear wheels spin once more, sending more clouds of smoke into the air

A woman who is sitting with him then says, ‘Is it a standard?’ as the truck driver tries in vain to accelerate once more, prompting the wheels to spin again.

Finally, the driver relents and allows the truck to roll back down the hill and the filmer says, ‘wow!’

A blogger on car website Jalopnik speculates that the reason why the modified truck could not cope with the hill was because of the difficulty of transferring power from the engine to the normal rear axle and the one which has been added on.

He theorises that the truck was in two-wheel drive mode and therefore unable to transfer the power needed to the two added wheels.

He adds that the vehicle would have needed a second gear box, which it did not have.