Australian observers of North Korea have dismissed the regime’s claim that Alek Sigley, the Australian who was detained until last week, was a spy, but acknowledged the young student had been granted extraordinary freedom to travel and share his observations about the country online.

They believe his detention had more to do with talks between North Korean dictator Kim Jong-un and United States President Donald Trump, which were held at the so-called "truce village" of Panmunjom on the border of North and South Korea on June 30. 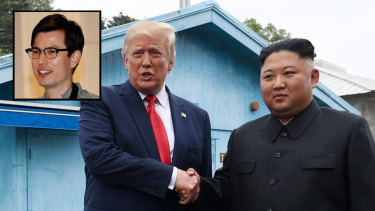 Mr Sigley, 30, a masters student in Korean literature at Kim Il Sung University, who also ran a tour business bringing foreign students into North Korea, was detained on June 25 and released on July 4. North Korea has long used the detention of foreigners within its borders as a method to send signals to or gain leverage over foreign governments.

On Saturday night North Korean state media KCNA reported that Mr Sigley had "on numerous occasions transferred information, including photographs and analysis, that he gathered while travelling to every corner of Pyongyang using his status as an international student" and that he had done so, "upon request by anti-DPRK [North Korea] news outlets such as NK news".

KCNA said he had been released because he "honestly admitted that he had been spying … and repeatedly asked for our forgiveness for infringing on our sovereignty".

NK News, which has published writing by Mr Sigley, welcomed his release but dismissed the suggestion he was a spy, describing his writing as, "vignettes of ordinary daily life in the capital".

Mr Sigley’s friend, Dr Leonid Petrov of the Australian National University, said that as a student Mr Sigley had been allowed to travel more freely than other foreign travellers in North Korea, and had published his observations via the internet more broadly than most other students, which might have drawn the attention of security services.

Mr Sigley’s writing about North Korea was studiously non-political but warm about the time he had spent in the capital PyongYang. His most recent blog post was a review of his five favourite restaurants.

Professor Joseph A Camilleri, an international relations specialist from La Trobe University, said it was impossible that the regime had not been fully aware of Mr Sigley's activities since the moment he arrived.

He said it was clear that Mr Sigley had been detained not because the regime was concerned about the content of his writing but because of the broader diplomatic context.

He said it would have been a very carefully calibrated act. To have detained an American citizen while background talks were being held between the US and the DPRK for the upcoming summit would have been dangerously provocative, but to detain a citizen of an ally would have sent a signal that it wanted to see a significant outcome from the meeting.

Mr Trump abruptly abandoned a summit between the two leaders in February.

Dr Petrov said the DPRK had little choice but to accuse Mr Sigley of spying after it had detained him. "They put themselves in the position where they had to explain his absence for over a week and they want to emphasise that they stick to the human rights charter."

He that while the regime had accused Mr Sigley of spying, it did not say who it believed he was spying for.

Dr Petrov said it was not clear entirely what the regime intended to achieve with the detention, but agreed it had nothing to do with Mr Sigley’s own reporting. He said various factions within the DPRK had competing interests.

He said he doubted it was a coincidence that Mr Sigley was detained on the anniversary of the start of the Korean War and released on the US Independence Day.

So far Mr Sigley has spoken little about his detention, saying as he was filmed walking through Beijing airport on Thursday, "I'm OK, I'm OK, yeah. I'm good. I'm very good … I'm great," and responding only "aah" when asked what happened in Pyongyang.