Colombo: Sri Lanka’s Prime Minister Mahinda Rajapaksa had to be rescued at dawn from his official residence by armed troops after thousands of protesters broke down the gate in the hours after he resigned from his office.

Rajapaska stood down late on Monday night following weeks of protests demanding that he and his brother, the country’s president, step down for dragging the nation into its worst economic crisis in decades.

Police tried to enforce a curfew after five people were killed and 200 wounded in a night of rioting, prompted by an economic catastrophe that led to soaring inflation, food and fuel shortages and lengthy power cuts. 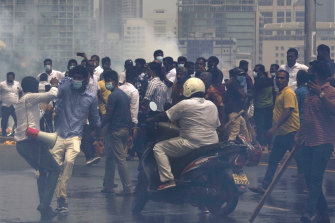 Rajapaska was holed up with his immediate family in the residence after announcing on Twitter that he had submitted his resignation to his brother, President Gotabaya Rajapaksa, a move that followed a violent attack by government supporters on the protesters.

For more than a month, protests have spread across the country, drawing people across ethnicities, religions and class. For the first time middle-class Sri Lankans also took to the streets in large numbers, marking a dramatic revolt by many former Rajapaksa supporters, some of whom have spent weeks protesting outside the president’s office.

The protests underscored a dramatic fall from favour of the Rajapaksas, Sri Lanka’s most powerful political dynasty for decades. The brothers were once hailed as heroes by many of the island’s Buddhist-Sinhalese majority for ending the country’s 30-year civil war, and despite accusations of war atrocities, were firmly entrenched at the top of Sri Lankan politics until now.

The prime minister’s resignation comes as the country’s economy has swiftly unravelled in recent weeks. Imports of everything from milk to fuel have plunged and people have been forced to stand in lines for hours to buy essentials. Doctors have warned of crippling shortages of life-saving drugs in hospitals, and the government has suspended payments on $US7 billion ($10 billion) in foreign debt due this year alone.

The president initially blamed Sri Lanka’s economic woes on global factors such as the pandemic and the Russia-Ukraine conflict. But both he and his brother have since admitted to mistakes that exacerbated the crisis, including conceding they should have sought an International Monetary Fund bailout sooner.

Sri Lanka has been holding talks with the IMF to set up a rescue plan but any long-term plan would take at least six months to get underway.

Sri Lanka was in financial trouble even before the Ukraine war drove up food and oil prices.

The Sri Lankan government has been running big budget deficits after cutting taxes in 2019 and struggling to collect taxes during the pandemic. It also has piled up massive foreign debt — much of it owed to China — and has scant foreign exchange reserves to pay for imports and to defend its embattled currency, the rupee. 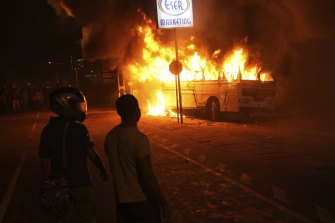 Protesters watch as a bus is set on fire outside the presidence’s residence on April 1.Credit:AP

Monday’s violence triggered widespread anger, with people singling out Rajapaksa supporters and attacking them in many parts of the country.

Ruling party politician Amarakeerthi Athukorale and his bodyguard were killed in Nittambuwa, some 30 kilometres north of Colombo after the car they were travelling in was intercepted by an angry crowd, the police spokesman said.

Athukorale or his bodyguard had fired gunshots at the protesters, who chased them and trapped them inside a building where their badly beaten bodies were recovered by police several hours later, the spokesman said.

Separately, in the Rajapaksas’ hometown of Weeraketiya, a crowd that tried to set fire to a local politician’s home was fired upon, killing two protesters, he said. 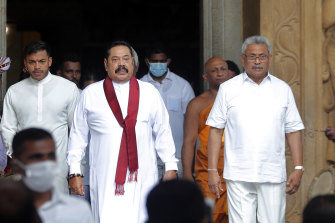 Protesters tried several times to break into the prime minister’s official residence Monday night, forcing police to fire tear gas. Homes of government ministers and politicians supporting the Rajapaksas were also attacked and some set on fire. The memorial for the brothers’ parents was vandalised.

Jayadeva Uyangoda, a political scientist in Colombo, said the prime minister’s resignation marked a new chapter in the country’s political crisis. “The prime minister had to resign in disgrace after his supporters unleashed such violence,” he said.

He added that it would be difficult for President Gotabaya Rajapaksa to maintain credibility after Monday’s violence.

But the president has so far refused to resign and Parliament must go through a difficult process if it attempts to oust him. The resignation of the prime minister meant the entire Cabinet was dissolved.

The US condemned the violence while also expressing concern about the emergency declaration, which it said can be used to curb dissent.

The country’s foreign reserves have plummeted below $50 million and it owes nearly $25 billion in foreign debt for payment by 2026. Its total foreign debt is $51 billion.

Meanwhile, popular anger at the Rajapaksa clan has only grown, ramping up pressure on President Gotabaya Rajapaksa to quit too.

“There has been sustained pressure for the last several weeks for the president to resign but he hasn’t paid much attention to that,” said Bhavani Fonseka, a senior researcher at the Colombo-based Center for Policy Alternatives.

“People are furious – and that anger is not going away anytime soon.”