Istanbul: A strong earthquake of magnitude of up 7.0 has struck the Aegean Sea and was felt in both Turkey and Greece, local and international observatories said.

People ran out into the streets in the Turkish coastal city of Izmir on Friday after the earthquake, witnesses said.

Turkish media showed the wreckage of a multiple-storey building in central Izmir, with people climbing it to start rescue efforts. At least one woman was shown being helped from the rubble of a collapsed building.

Turkey's Disaster and Emergency Management Presidency (AFAD) put the magnitude of the earthquake at 6.6, while the US Geological Survey said it was 7.0. It struck at around 11.50 GMT and was felt along Turkey's Aegean coast and the north-western Marmara region, media said. 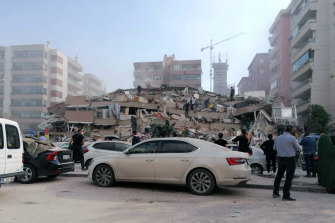 Izmir mayor Tunc Soyer told CNN Turk that about 20 buildings collapsed. The city is the third biggest in Turkey with about 4.5 million residents. Turkey’s interior minister tweeted six buildings in Izmir were destroyed. He said there were small cracks in some buildings in six other provinces.

A tsunami warning was issued, with residents of the Samos area told to stay away from the coastline. Water rose above the dock in the main harbor of Samos and flooded the street.

"It was a very big earthquake, it's difficult to have a bigger one," Eftyhmios Lekkas, head of Greece's organisation for anti-seismic planning, told Greece's Skai TV.