Chinese murder suspect on the run rams his car into a police station before launching a knife attack, leaving at least two dead

A murder suspect on the run deliberately rammed his car into a crowd at a police station before slashing civilians and officers in China today.

Two policemen were killed and four civilians were injured during the horrific attack in Renshou County, south-west China’s Sichuan Province, according to reports.

The attacker, known by the surname of Zhang, was shot and killed by the police. 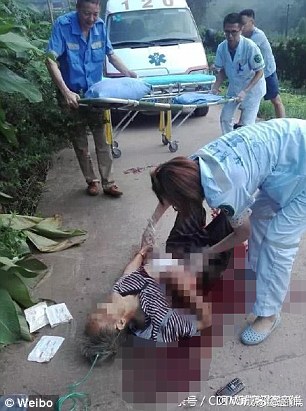 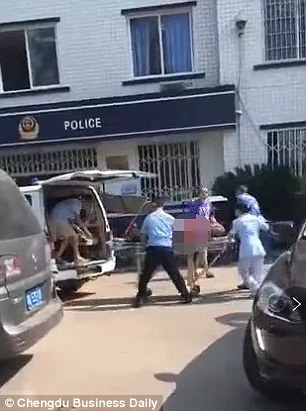 Pictures from Chinese newspapers and social media show the victims lying in a pool of blood and being taken to the hospital. A knife man launched a killing spree today in Renshou, China

It is alleged that Zhang launched the assault just hours after having killed a work colleague, Renshou police said in a statement on its official social media account.

He had stabbed his co-worker, Xie, on a construction site at around 7am local time, said the statement. Xie died after being rushed to the hospital.

Zhang was suspected of killing Xie and the county police immediately started researching for him.

Three hours later at around 10am, suspect Zhang drove his car into the Public Security Bureau of the Renshou County while being chased by the police.

He deliberately hit the civilians, said the police. 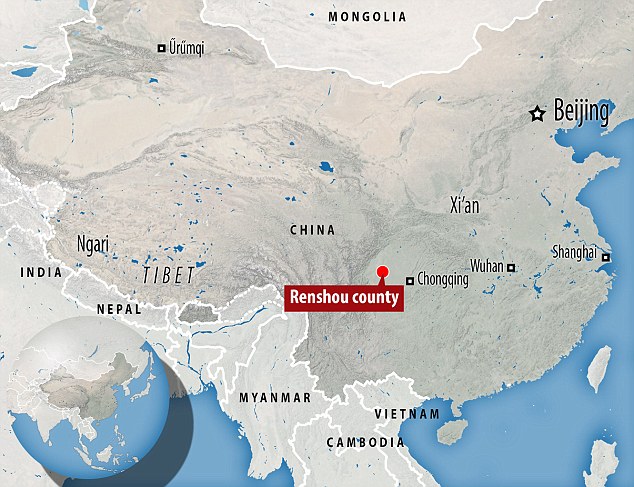 Several police officers, including the head of the police station, tried to tackle Zhang, and two of them were seriously wounded during the fight, added the police.

Pictures released by Chinese media, including Chengdu Business Daily and by BJNews, show victims being rushed to the hospital.

Two injured officers died in the hospital and the injured civilians suffered different degrees of wounds and are being treated, it is reported.

The suspect was shot at the scene and died in the hospital.

The police are carrying out further investigation.