Information provided to the hotel quarantine inquiry by the Department of Health has contradicted Victoria’s Chief Health Officer Brett Sutton's claim that he was not involved in the planning of Victoria's hotel quarantine program.

The conflicting position of the Department of Health and Human Services is buried deep within witness statements and submissions to Victoria's hotel quarantine inquiry, where it says "public health leadership, advice and expertise was sought by and operationalised in Operation Soteria, including through the Chief Health Officer and Public Health Commander". 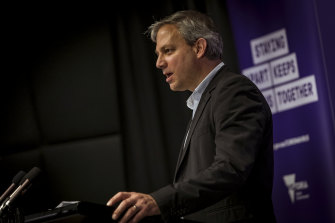 The board of inquiry into hotel quarantine is set to hold an “extraordinary sitting” on Tuesday after The Age last week revealed crucial emails had been withheld from the inquiry, including one sent on April 1 that placed the Chief Health Officer at the top of a “strict chain of command” for the quarantine system.

The April 1 email, which noted that the CHO would be supported by senior members of the public health team, said: “It is important that all direction, policy, reporting and arrangements do not break this chain.”

“This strict view is vital to safeguard the wellbeing and duty of care owed by the State to these people and legal and other risks to the department and its staff, who are administering the detention regime on behalf of the Deputy Chief Health Officer and Chief Health Officer.”

Responding to the revelations on Sunday, Professor Sutton said he had received up to 30,000 emails on coronavirus since the start of the pandemic and as many 150 a day.

"If I have missed a reference to security … when the program was established, I'm sorry, it hasn't registered," he said. "So when I've spoken to the inquiry to say exactly that, that was the case.

"I was never involved in a decision-making around private security… I was not involved in the set-up of the program and I did not have a command or control role. And as I said to the inquiry at the time, my public health team were trying to make a case for stronger oversight from the public health team so I was keen."

Professor Sutton's witness statement to the inquiry declared he was not “sufficiently aware” of the detail of Operation Soteria, the name given to the Victorian government’s program in late March to put all returning international travellers into mandatory quarantine, to form a view if it was the best option for minimising the risk of COVID-19 spreading into the wider community.

“I am informed that Operation Soteria commenced on March 28,” Professor Sutton stated. “I was not directly involved in the operational planning, approving or running of the Victorian hotel quarantine program.”

Operation Soteria required the activation of emergency powers under Victoria’s Public Health and Wellbeing Act. The Chief Health Officer is responsible for authorising the use of the act’s emergency powers, such as the forced detention of people.

Testimony by Professor Sutton and others from the public health team about their lack of involvement in Operation Soteria had led to counsel assisting the inquiry to observe in final submissions that “the Chief Health Officer and Public Health Commander [deputy chief health officer] weren’t in the line of hierarchy in Operation Soteria, they were off to one side”.

DHHS has now provided the inquiry headed by retired judge Jennifer Coate with the emails ahead of the extraordinary sitting. The department said on Friday it had always been cooperative with the inquiry and its requests for relevant documents.

The Health Department's final submission to the inquiry, signed by the department’s solicitors from law firm Minter Ellison rather than its barristers, stated that it was an oversimplification to say the public health team had been sidelined.

The Age last week also revealed a separate email chain withheld from the inquiry which showed Professor Sutton authorised a response to the federal government on March 27 that clearly stated Victoria would be relying on private security at quarantine hotels.

This email chain contradicted Professor Sutton’s evidence to the inquiry in which he claimed he was not aware private security were being used until a COVID-19 outbreak in staff and guards at the Rydges on Swanston hotel in late May.

Addressing the emails on Saturday, Professor Sutton acknowledged he was involved in the March 27 email chain but said he "did not register" the reference to private security in the response he had asked colleagues to prepare for a senior official from the Department of Home Affairs.

Professor Sutton said he stood by the evidence he had given and that he had provided the department with all relevant emails for disclosure to the inquiry.

Premier Daniel Andrews strongly backed Professor Sutton over the weekend in the face of state opposition requests he and other senior government officials be recalled by the inquiry.

A spokesman for the Board of Inquiry on Sunday said he could not provide any information about Tuesday’s extraordinary sitting, including if any witness would be recalled.