A spate of swan deaths across Britain have been linked to a wave of bird flu sweeping into the country from Europe.

The Department of Environment, Food and Rural Affairs has asked people to report sightings of dead swans after confirming cases of H5N8 in wild birds.

Outbreaks of H5N8, which has been in evidence among wild bird populations in Europe, have been confirmed in geese and swans in Gloucestershire, Devon and Dorset.

Dying swans were also found spinning in circles and bleeding from the nostrils in Cumbria. 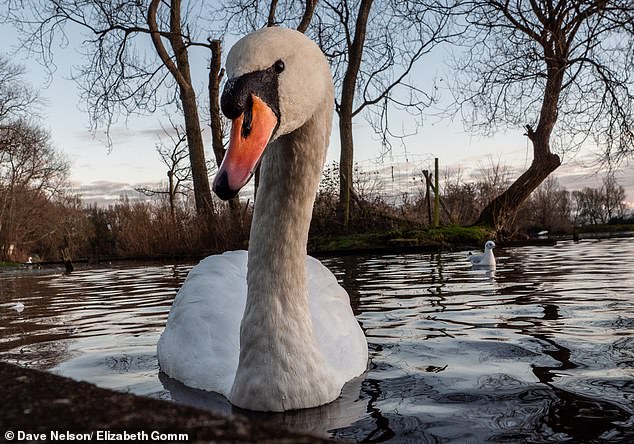 A spate of swan deaths across Britain have been linked to a wave of bird flu sweeping into the country from Europe. Pictured: A swan in Stanley Park, Blackpool, where an outbreak of bird flu has resulted in the death of nine swans since November 15

Britain’s Chief Veterinary Officer Christine Middlemiss told the Telegraph: ‘After a number of confirmed cases of avian influenza in England we have taken swift action to limit the spread of the disease.’

Some bird keepers across England, Wales and Scotland have been placed under strict biosecurity measures after the discovery of H5N8 cases at two poultry farms in Herefordshire and Cheshire.

Public Health England has said the risk to public health and food safety from the virus is low, with properly cooked poultry and poultry products including eggs posing no danger.

Research fellow at the Wildfowl and Wetland Trust Dr Ruth Cromie told The Guardian: ‘Wild birds are often seen as evil vectors, but they are victims of a virus which originally spread from poultry. 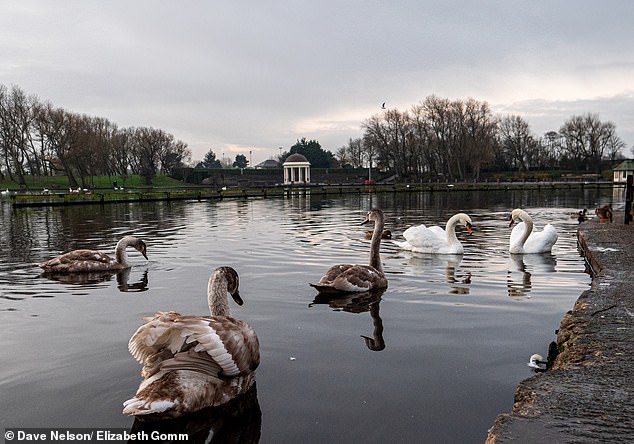 Pictured: Swans in Stanley Park, Blackpool, where an outbreak of bird flu has resulted in the death of nine swans since November 15

‘Wild birds get used as scapegoats for poor biosecurity and people moving chickens around the globe.’

In Ulverston, Cumbria, ten swans died from the flu after showing strange symptoms, according to Caroline Sim, of Flying Free.

She said: ‘Many of them started to spin on their axis in one direction. It was terrible to see. Some of them were discharging from their nostrils and some of it was bloody.’

Nine swans have died in Stanley Park, Blackpool, since November 15 but experts say there have been no recorded cases of H5N8 in humans anywhere in the world.

Dr Holly Shelton, an expert in influenza viruses at the Pirbright Institute, said: ‘All influenza viruses have the potential to evolve and generate changes that might cause it to jump into another host species.’