Shoppers were left in shock after spotting a young man taking his 12-foot python ‘for a walk’ in a busy town centre.

The reptile owner was seen strolling with his friend and his pet snake in Brighton, East Sussex, on Tuesday afternoon.

Concerned locals contacted the police who confronted the man and persuaded him to take the python home. 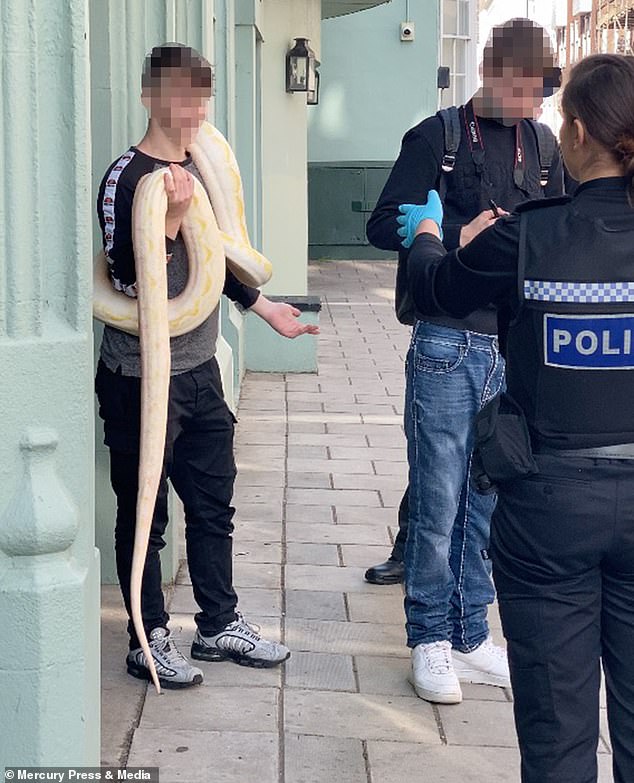 The young man was spotted with his pet snake in the centre of  Brighton, East Sussex

How deadly can pet pythons be? Popular snakes that have turned on their owners in killings around the world

Pythons are found in sub-Saharan African countries and in parts of Asia.

They are non-venomous snakes and kill by constriction, latching on with their teeth and coiling around their prey.

Burmese pythons can grow up to 23ft with other species, like the ball python growing to around 6ft.

Due to their docile natures, pythons are one of the most popular snake breeds to be kept as pets. However, attacks on their handlers are not uncommon.

A python had never been known to have killed a person in Britain until the death of Dan Brandon in 2018.

A man was killed by a python in Indonesia in 2018, while two boys died in Canada after one escaped from a pet shop in 2013.

Noah Barthe, four, and his brother Connor, six, were at a sleepover at Jean-Claude Savoie’s flat above the shop, called Reptile Ocean, in August 2013.

The African rock python got out through a ventilation duct in Campbellton, New Brunswick, and dropped into the living room where the two boys were sleeping.

It strangled and bit them to death and sparked a court trial, where the owner was cleared of responsibility.

The man and his friend are thought to have been intending to film the snake for their YouTube channel where they post videos of reptiles in unusual places.

Police said the pair dropped to snake on the ground and were inviting people to hold it as they filmed them.

Erik Selby, 30, caught the bizarre incident on camera after hearing the disturbance from his office.

He said: ‘There was a lot of commotion and somebody said something about a snake, but I thought they meant a tiny snake. I had seen a big yellow thing on the floor, but it didn’t even cross my mind that was a snake at first.’

The two police officers ask the man to remove the reptile from the street, before he argues that his pet is ‘content’ where it is.

Eventually the officers managed to persuade him to take it home and he walks away with the python wrapped around his neck.

Steven Allain, from the British Herpetological Society, told the Argus: ‘A cold September afternoon is not the time to take a tropical snake into a town centre.

‘The owner is the person most at risk, all it takes is for the python to get a little spooked or hold on a little too tight when being carried around the neck and you could quickly lose consciousness or worse.

‘A snake of that size isn’t going to eat you but it could easily inflict harm without even realising it.’

One person said on Facebook: ‘If you see this idiot in Brighton, make sure you tell him what he’s doing to that snake is cruel.

‘Reptiles require heat to digest there food correctly and if they don’t get the correct heating it can lead to serious health problems.. Mug.’

Erik, a video production company owner, added: ‘The man was arguing ‘how is this different to walking a dog?’

‘The officers didn’t answer back to that. They kept encouraging him to take the snake home.

‘They were as baffled as anyone else. They were saying how it was an interesting end to a shift.’

A Sussex Police spokesman said: ‘Police were called to Ship Street in Brighton at 2.35pm on Tuesday (September 29), following concern for the welfare of a large snake that was being carried in the street.

‘It was reported that the snake had been dropped to the ground and being used for filming with people being invited to hold it.

‘The young man with the snake agreed to return it to his car and was escorted back to his vehicle.’