Terminally ill grandfather, 69, who has just six months to live is ‘devastated’ after being told he must reapply for disability benefits by the DWP

The Department for Work and Pensions is forcing a terminally ill man to reapply for his benefits – despite having just six months to live.

Ron Stevenson, 69, was diagnosed with motor neurone disease ten years ago and relies on moderate weekly care payments to supplement his care.

Those in his position can claim up to £150 a week in Personal Independence Payments to ease suffering and care. 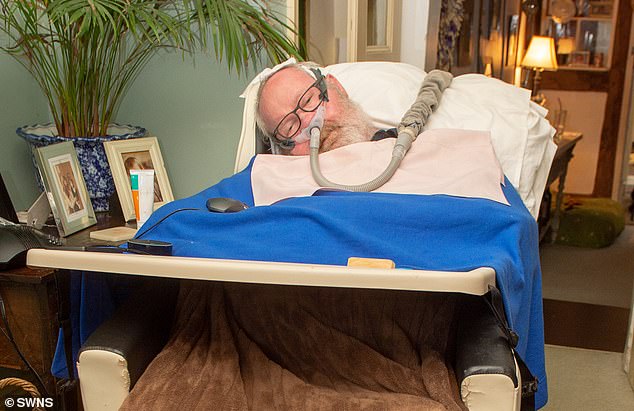 Ron Stevenson (pictured), 69, was diagnosed with motor neurone disease ten years ago and relies on moderate weekly care payments to supplement his care

But last month, Ron received a letter from the Department of Work and Pensions (DWP) calling for him to reapply for his benefits because he is up for reassessment.

Grandfather Ron, of Staplefield, West Sussex but originally from Lancashire, called the call for reassessment ‘devastating’.

He said: ‘The letter said if you do not reply then on July 29 your payments will stop. 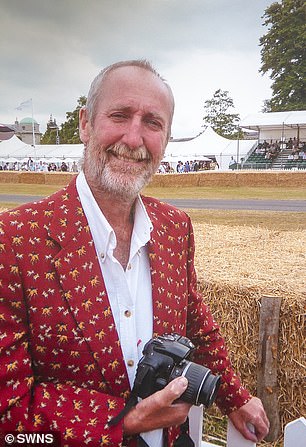 Ron (pictured in 2010), of Staplefield, West Sussex but originally from Lancashire, called the call for reassessment ‘devastating’

‘Obviously I’m aware that this is something that can happen, but it was still a shock.

‘People with motor neurone disease never get better – there is only one outcome and that is death.

‘Anyone with a grain of sense would’ve realised anyone paralysed and life limited as I am cannot be anything other than eligible.’

After weeks of worry, Ron and Gill, 64, contacted the DWP by phone to set the record straight.

He said: ‘The following day I got news back saying that the DWP is looking at the case and I would receive a letter.

‘I rang my GP for my DS1500 form – which is the form that states the patients will die within six months.’

Ron was contacted by the office of MP Nicholas Soames and reassured that after speaking with the DWP, his payment would continue.

He said: ‘This individual case does not cover all the others with the condition – not everyone has the support that I do.

‘Some will look at the letter and think ‘oh my God’, they have lost their benefits, imagine the disconsolation.’ 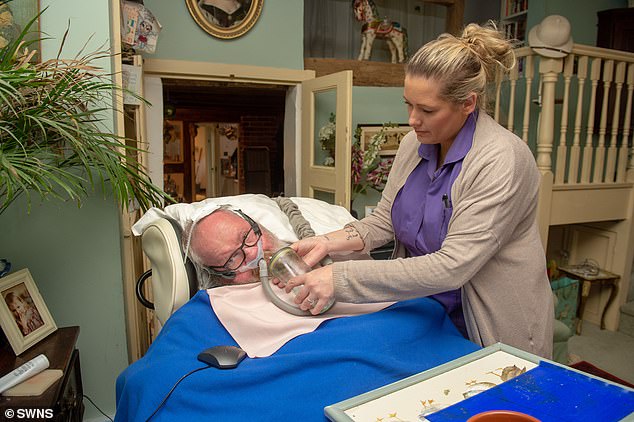 Ron with his carer Mary-Ellen Dunksmit. The father-of-two said the ‘crazy’ situation of reassessment for life-limited motor neurone sufferers must be addressed.

The DWP contacted Ron by letter on Wednesday, more than a month after his call, to confirm he will be getting his benefits for three more years – if he lives long enough.

When asked about this further reassessment, a DWP spokeswoman said: ‘This will be a letter saying has his condition changed.’

She was then reminded that Ron’s condition is terminal, to which she said ‘these are the rules we have to follow’.

According to the Motor Neurone Association, there are 5,000 people suffering with the degenerative condition in the UK. 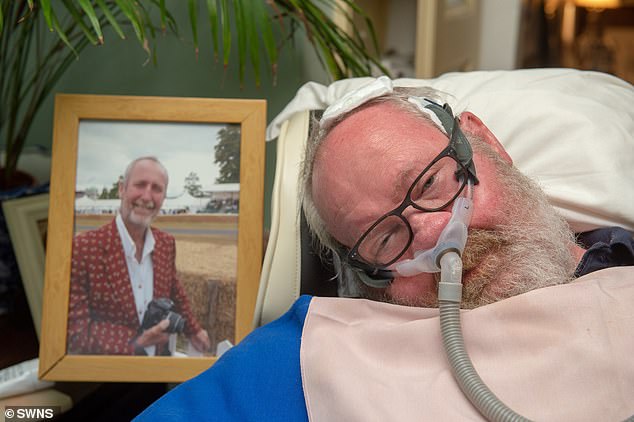 Most motor neurone disease sufferers die within two to five years of diagnosis, and it is the condition that claimed the life of renowned physicist Stephen Hawking

The report also estimated the cost to a family of having to live with MND as £15,000 each year.

Father-of-two Ron said the ‘crazy’ situation of reassessment for motor neurone sufferers must be addressed.

He said: ‘We were promised by the government that the reassessment for benefits would stop in 2016 – this has been broken.

‘I’m working to raise awareness, we won’t stop fighting, despite the fact the disability is fatiguing.

‘I have lost the use of my limbs, but I shall use my voice, while my friends can no longer.’

Most motor neurone disease sufferers die within two to five years of diagnosis, and it is the condition that claimed the life of renowned physicist Stephen Hawking.

A DWP spokesperson added: ‘Our thoughts are with Mr Stevenson at this difficult time and we are sorry if our notification letter caused him distress.

‘We fast track reviews to confirm support for people in his situation, which can be done by the medical professional on their behalf, and we continue to pay Mr Stevenson the higher rate of PIP without a break.’

WHAT IS MOTOR NEURONE DISEASE (ALS)?

The NHS describes motor neurone disease (MND) as: ‘An uncommon condition that affects the brain and nerves. It causes weakness that gets worse over time.’

It was first discovered in 1865 by a French neurologist, Jean-Martin Charcot, hence why MND is sometimes known as Charcot’s disease.

However, according to Oxford University Hospitals: ‘Nearly 90 per cent of patients with MND have the mixed ALS form of the disease, so that the terms MND and ALS are commonly used to mean the same thing.’

Slurred speech is an early symptom and may later worsen to include difficulty swallowing food.

Muscle cramps or twitches are also a symptom, as is weight loss due to leg and arm muscles growing thinner over time.

MND is difficult to diagnose in its early stages because several conditions may cause similar symptoms. There is also no one test used to ascertain its presence.

However, the disease is usually diagnosed through a process of exclusion, whereby diseases that manifest similar symptoms to ALS are excluded.

The NHS says that MND is an ‘uncommon condition’ that predominantly affects older people. However, it caveats that it can affect adults of any age.

The NHS says that, as of yet, ‘it is not yet known why’ the disease happens. The ALS Association says that MND occurs throughout the world ‘with no racial, ethnic or socioeconomic boundaries and can affect anyone’.

It says that war veterans are twice as likely to develop ALS and that men are 20 per cent more likely to get it.

There is no cure for MND and the disease is fatal, however the disease progresses at different speeds in patients.

People with MND are expected to live two to five years after the symptoms first manifest, although 10 per cent of sufferers live at least 10 years.

Occupational therapy, physiotherapy and medicines such as riluzole are used to palliate the effects of the the disease.

Lou Gehrig was a hugely popular baseball player, who played for the New York Yankees between 1923 and 1939. He was famous for his strength and was nicknamed ‘The Iron Horse’

As well as being known as ALS and Charcot’s disease, MND is frequently referred to as Lou Gehrig’s disease.

Lou Gehrig was a hugely popular baseball player, who played for the New York Yankees between 1923 and 1939.

He was famous for his strength and was nicknamed ‘The Iron Horse’.

His strength, popularity and fame transcended the sport of baseball and the condition adopted the name of the sportsman.

He died two years after his diagnosis.