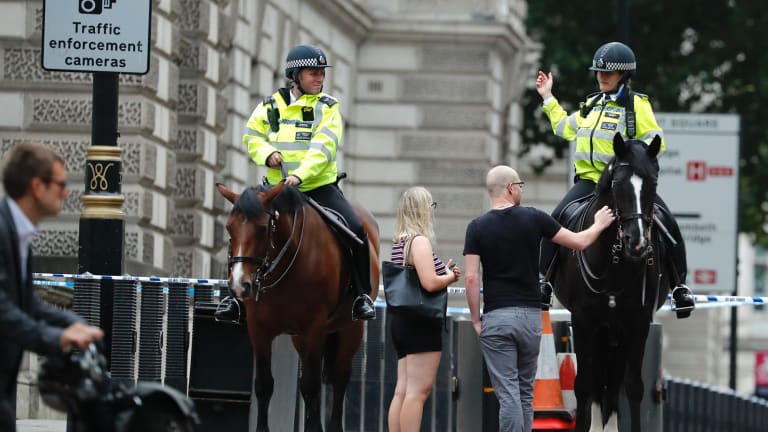 Mounted police officers block a road leading to the scene of the collision.

London. The man suspected of the terror attack on London's Houses of Parliament has been revealed as a British citizen of Sudanese origin.

The suspect, believed to be Salih Khater, 29, was arrested on Tuesday after a car smashed into cyclists and pedestrians, injuring three, before colliding with barriers around Parliament. None of the injured people remains in hospital.

A man was detained on suspicion of "the commission, preparation and instigation of acts of terrorism", police said. Police said later the man was also suspected of attempted murder.

British authorities do not name suspects until they are charged, but media and neighbors said the arrested man was Mr Khater. Police confirmed the suspect was a 29-year-old British man originally from Sudan.

The area around Parliament may be turned into a pedestrian zone, British authorities said on Wednesday, to prevent similar attacks.

Police also searched three properties for clues about the motivation for the attack: an apartment where the suspect had lived in the central England city of Birmingham, as well as another property in the city and a third in Nottingham, about 80 kilometres away. They continued to search a third Birmingham property.

A Facebook page for a man of the same name says he lives in Birmingham, works as a shop manager, and has studied at Sudan University of Science and Technology. Coventry University in central England said Mr Khater had studied accounting there between September 2017 and May 2018 but was no longer enrolled.

Ahmed Abdi, a neighbour of Mr Khater in Birmingham, said he recognised him from news footage, "and I was shocked". 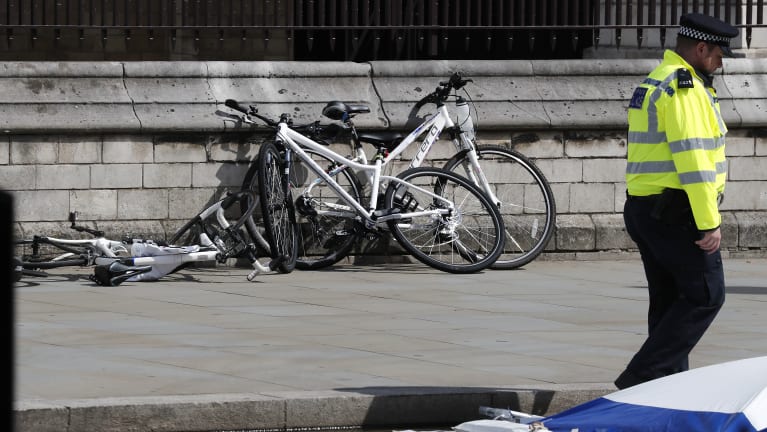 Bicycles near the scene of the crash at the Houses of Parliament.

"He was very, very quiet and he never spoke to anybody. He would say nothing to nobody," Abdi said.

London's Metropolitan Police force said the suspect was not known to counter-terrorism officers or the intelligence services.

The suspect was being held at a London police station as detectives traced the movements of the Ford Fiesta involved in the incident.

Detectives say the car was driven from Birmingham to London late on Monday, and drove around the area near Parliament for an hour and a half on Tuesday morning before the peak-hour crash.

The incident appears to be the second in less than 18 months in which a vehicle has been used to attack the heart of Britain's government. Over the past two decades authorities have tightened security around Parliament with fences, crash barriers and armed police.

Now the rise of vehicle attacks around the world is triggering calls for traffic to be barred from Parliament Square, currently a busy traffic route.

London Mayor Sadiq Khan told the BBC that the plan presented challenges, but "it's possible to have a design solution that meets the objectives … in relation to keeping our buildings and our people as safe as we can do, but also not losing what's wonderful about our city which is a vibrant democracy."

Police on Tuesday flooded the streets around the iconic neo-Gothic Parliament buildings and blocked off the area that attracts tourists as well as lawmakers.

The crash came less than 18 months after an attacker plowed a car into pedestrians on Westminster Bridge, killing four people, then fatally stabbed a police officer before being shot dead in a courtyard outside Parliament.

Less than three months later, a van rammed into pedestrians on London Bridge before three men abandoned the vehicle and attacked weekend revelers in the nearby Borough Market. Eight people were killed and 48 injured.

In June 2017, a far-right extremist drove a van into a crowd of worshippers leaving a London mosque, killing one man and injuring eight others.

Security officials say that since March 2017 they have foiled 13 Islamist-inspired plots and four far-right plots, and are pursuing 676 live counter-terrorism investigations.