Home » World News » The business of mandating a COVID vaccine, and why we may – or may not – need to

Last week, Prime Minister Scott Morrison said he would make the COVID-19 vaccine as mandatory as possible. He then walked back the statement, but not before creating a furore. 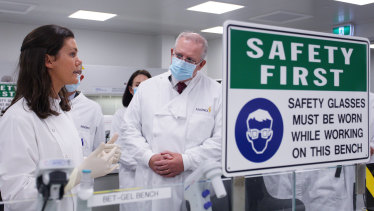 Yet for real life to resume, the vaccine has to go into arms.

This underpins the Prime Minister’s statement, which was ill-advised because there are many things governments should do before considering mandatory vaccination.

Moreover, the term ‘mandatory’ is often used without any clarification of what it means.

My research on mandatory childhood vaccination globally has uncovered several features that need to be in place for a vaccine to be mandatory.

First, there is the question of proof. Some countries permit doctors’ letters as proof; others require forms. Governments don’t always know who is vaccinated – sometimes individuals present proof to schools or daycare providers, who are required to exclude unvaccinated children.

However, the most robust proof comes from an electronic register, which allows governments to know the vaccination status of every individual.

The Australian Immunisation Register (AIR) is the oldest in the world, but although it was extended to adults in 2016, it is not widely used in this population.

If proof of COVID vaccine becomes important, AIR would likely be the source.

We would need to be able to demonstrate our status easily, perhaps through a smartphone app.

The second important feature of a mandate is consequences.

Mandates involve something (bad) happening to those who do not vaccinate. Italy fines parents who don’t vaccinate their children.

However, fines would be insufficient if they simply enabled someone to ‘purchase’ the right to not vaccinate.

In a context of COVID-19, consequences for non-vaccination could link to restrictions, such as participating in public gatherings, entry to sporting events, and exclusions from spaces such as hospitals. Governments could also use incentives, such as special bonus payments, extra tax refunds, or private health rebates.

However, governments would likely look to save money by removing entitlements and opportunities rather than generating them. Welfare and taxation systems, our passports, and our freedom of movement between states could all connect to our vaccination status.

Employers may also require us to be vaccinated in order to attend our workplaces, and governments could set up legal frameworks (addressing anti-discrimination laws, or developing toolkits for employers) to encourage employers to voluntarily impose mandates on employees.

Governments are large employers themselves, and in sectors such as healthcare, there is already precedent for requiring other vaccines.

The third crucial component of mandates is enforcement.

Every mandate would require enforcement to check that proof is accurate and not fraudulent, and to check protocols are being followed.

This may involve imposing a separate set of consequences on those who do not appropriately enforce mandates, such as large fines for businesses that admit unvaccinated persons.

Enforcing mandates, or enforcing the enforcers, would be public functions. They would involve the setting up of new inspection systems and would cost public money.

Multiple mandates could reach Australians in different stages of their lives and occupying different income brackets, but this widespread option may not be necessary, and governments could instead attach mandates to key core functions and activities, such as health workers, international travellers, and tourists returning to Australia.

But these examples demonstrate mandates’ limitations.

People might not licence their dogs because they don’t believe a ranger will ever catch them. And high-income parents can easily escape Australia’s mandatory childhood vaccination policies. Whether people believe they need to comply, and whether mandates apply universally and fairly, will be important considerations for mandates’ effectiveness and public acceptability.

The present tasks should involve research into communities to help policymakers understand people’s concerns. This can inform the design and delivery of public communications.

Given what COVID-19 has done to communities like Melbourne, addressing the ongoing disruptions the virus can wreak, as well as its sickness and death toll, would appear useful strategies at the outset, but strategies will need to be researched and tested.

When it’s ready, the vaccine should be rolled out based on what research tells us can easily reach the public, and the resources health departments already have.

Rollout will start with high-risk groups, before moving on to the wider population.

Making it extremely easy to access the vaccine, including through targeted interventions, may help to mitigate against the need for mandates.

Mandates might only enter the picture if uptake is not sufficiently high.

On this basis, vaccine refusers would be wise to stop spreading fear about the COVID-19 vaccination in the community. They will be relying on the rest of us to get vaccinated if they do not wish to have it themselves.

Dr Katie Attwell is a senior lecturer in the School of Social Sciences at the University of Western Australia. She is funded by the Australian Government to research mandatory childhood vaccination regimes globally, under the Australian Research Council Discovery Early Career Researcher Award DE190100158.