Washington: Natural disasters cost $220 billion this year according to the Zurich-based reinsurance company Swiss Re.

The United States, which was hit particularly hard, suffered through Hurricanes Michael and Florence, the California wildfires and Hawaii's volcano eruption, all of which are on the list of the most expensive global disasters of 2018. 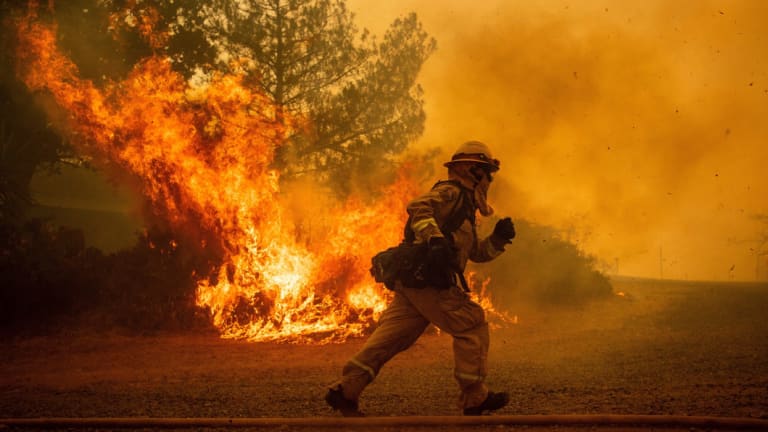 A firefighter runs while trying to save a home as a wildfire tears through Lakeport, California.Credit:AP

"Like last year, the losses from the 2018 series of events highlight the increasing vulnerability of the ever-growing concentration of humans and property values on coastlines and in the urban-wildlife interface," Swiss Re said in its report.

"The very presence of human and property assets in areas such as these means extreme weather conditions can quickly turn into catastrophe events in terms of losses inflicted."

California wildfires:  More than 8500 wildfires burned nearly 1.9 million acres (769,000 hectares) in California this year, making it the worst fire season on record, according to Cal Fire. The Camp Fire, which ignited in early November and spread unthinkably fast, killed 86 people and destroyed the entire town of Paradise. Insured losses from the Camp Fire alone could top $US10 billion ($14 billion). 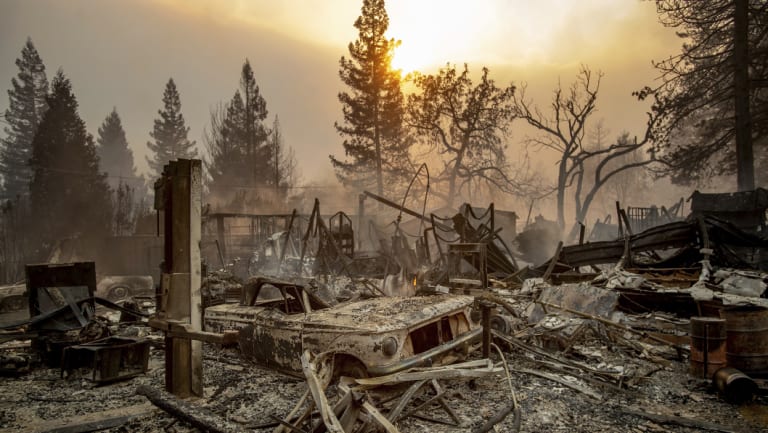 A vintage car rests among debris after the Camp Fire tore through Paradise, California on November 8.Credit:AP

Hurricane Michael made landfall just shy of a Category 5, but for all intents and purposes, the storm was the worst-case scenario for Mexico Beach, Florida, and its surroundings near Panama City. Michael was the third-strongest hurricane on record, in terms of pressure, to make landfall in the United States, and had the strongest winds since Hurricane Andrew made landfall in 1992. Economists predict Michael will cost $US25 billion. 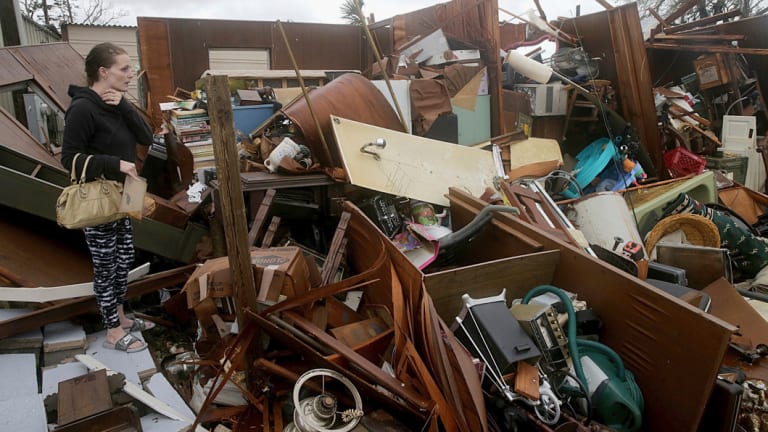 Haley Nelson inspects damage to her family properties in Florida after Hurricane Michael made landfall on October 10.Credit:AP

Hurricane Florence may have weakened significantly before it made landfall in the Carolinas in early September, but it generated the rain of several storms. Hundreds of thousands of customers lost power in North Carolina, where more than 10,000 fled to shelters before the storm hit. Many others sought refuge from the flooding with family, friends or in hotels. 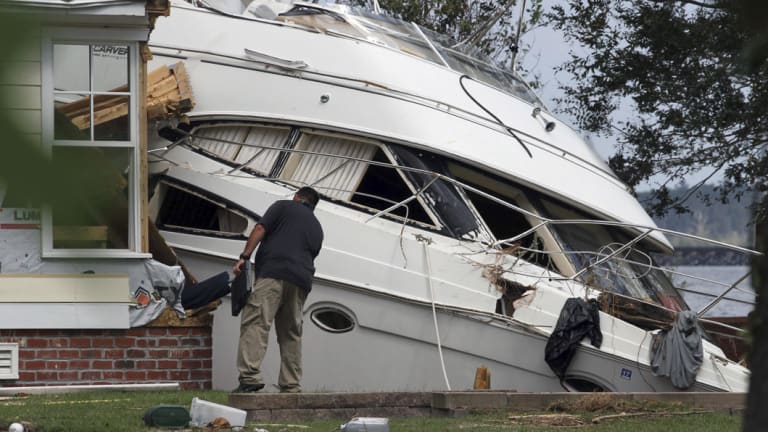 An insurance adjuster looks over a storm-beached yacht in North Carolina after Hurricane Florence came through on September 20. Credit:AP

Typhoon Mangkhut slammed into the northern Philippines in September with the strength of a Category 5 hurricane, weakened slightly while crossing the South China Sea and then came face to face with Hong Kong. It was the strongest storm to make landfall in the Philippines since Megi in 2010, and the strongest in Hong Kong since 1983. Mangkhut prompted the Hong Kong Observatory to issue an exceptionally rare Signal 10 on its 1-to-10 scale for storms. It killed more than 130 people and did several billion dollars in damage. 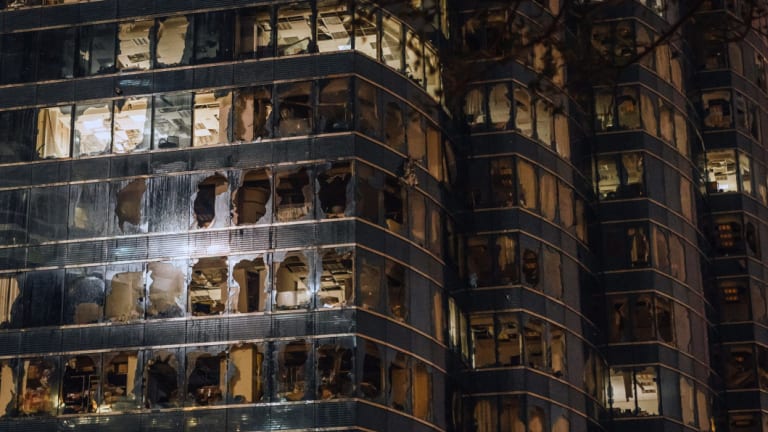 A building stands with shattered windows after Typhoon Mangkhut in Hong Kong on September 16.Credit:Bloomberg

European drought and wildfires: Wildfires ravaged Greece this year, including a fire in Attica that killed dozens of people and drove residents running into the sea. Corpses of families were found in the ash, apparently holding each other. Drought conditions and a heat wave over Europe gave rise to the Attica fires, which were among the worst in modern history for Greece. 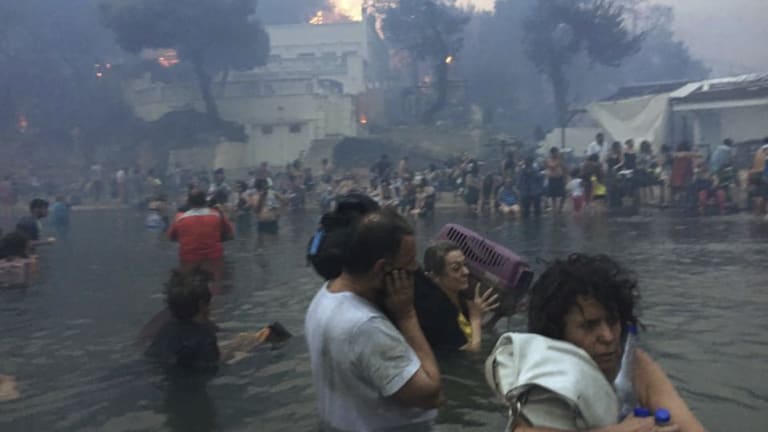 Dozens shelter in the sea off the “Silver Coast” beach in Mati, Greece as fire rips through the resort town on July 23.Credit:Elia Kallia

Japan floods: More than 200 people died this summer as a series of heavy downpours battered south-west Japan. As much as 1.8 metres of rain fell in Japan's Shikoku Island over 10 days in late June and early July. 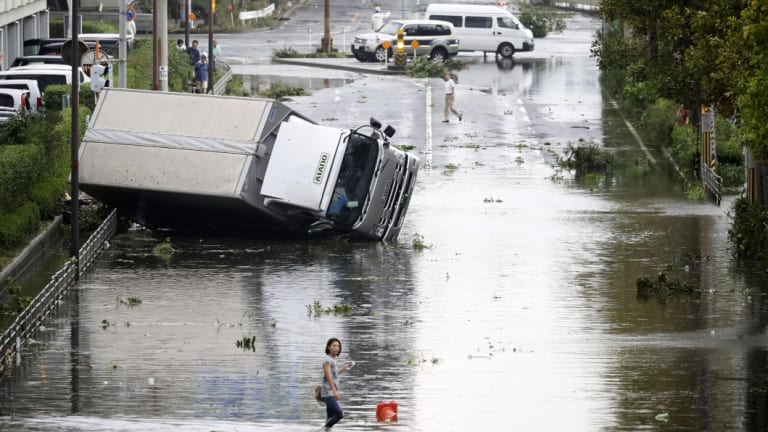 An overturned truck on a flooded road following a powerful typhoon in Osaka, western Japan on September 4.Credit:AP

Earthquakes and tsunamis in Indonesia: Even before the December 22 tsunami, earthquakes in Indonesia had been catastrophic this year. Then, just a few days before Christmas, one of the most active volcanoes in the world exploded in a violent eruption and triggered underwater landslides, which led to a tsunami that killed at least 430 people. Around 1500 others were injured in the coastal regions of the Sunda Strait. 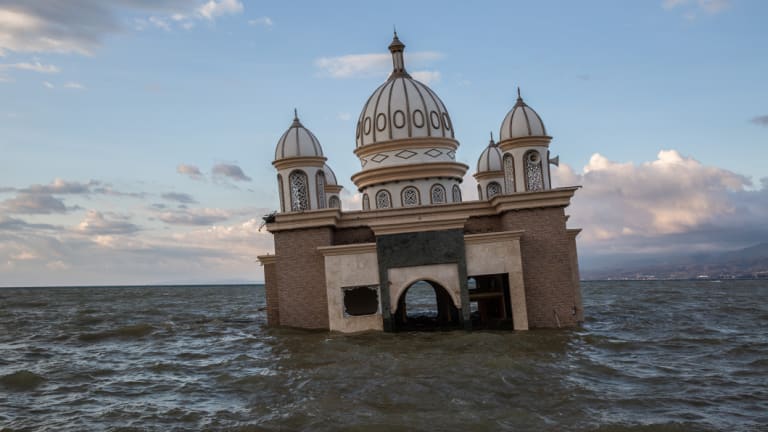 A mosque is surrounded by water in Palu, Central Sulawesi, on Tuesday after the earthquake and tsunami on October 9.Credit:Bloomberg

Volcanic eruptions in Hawaii: The East Rift Zone of the Kilauea volcano in Hawaii exploded to life this spring, becoming far more active than normal. Several neighbourhoods burned down and were buried by the molten rock that spewed from the Big Island's volcano. New coastline formed as the lava reached the ocean and cooled rapidly in the water. There were no deaths from this slow-motion eruption, but it will end up costing around $1 billion. 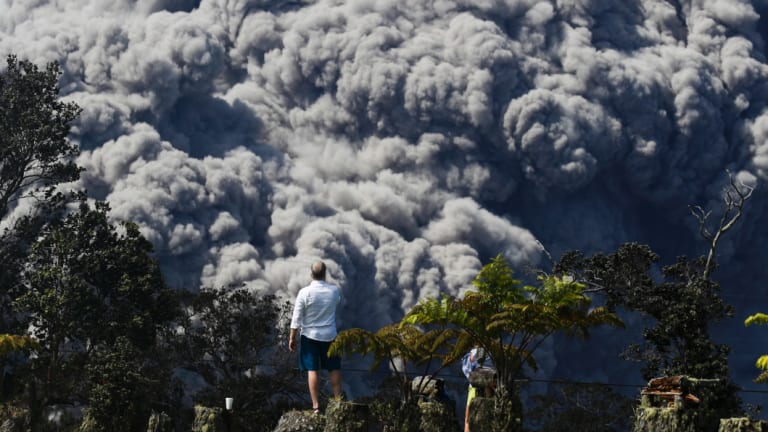 Jack Jones at a country club in Volcano, Hawaii, as a huge ash plume rises from the summit of Kiluaea volcano on May 21.Credit:AP