A curious thing happened in this Victorian election campaign. Like the story of Benjamin Button, Daniel Andrews receded before our eyes. A campaign which began with Andrews towering over state politics ended with him shielded from public view.

In a first for a state premier, he voted away from his electorate of Mulgrave at a quiet city booth on a Thursday evening without a phalanx of TV crews in tow. 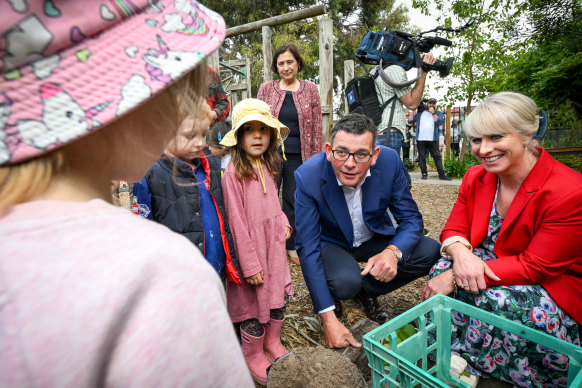 Premier Daniel Andrews, accompanied by his wife Catherine, takes questions from a young constituent at Westgarth Kindergarten in Northcote on the final day of the campaignCredit:Eddie Jim

Where a political leader traditionally spends the morning before an election in media blitzkrieg, the Victorian premier offered dead air. He didn’t go on any of the morning TV shows and didn’t do any radio spots. He has refused to go on the two leading talk stations, ABC Radio and 3AW, throughout the campaign.

Instead, he kept with his well established pattern of making a single, public appearance, this time at a sun-dappled kindergarten in uber-progressive Northcote, where the pictures would be bright, his exposure to adults kept to a minimum and interactions with journalists unlikely to be seen by anyone other that other journalists and campaign staff.

The only other glimpse we caught of Andrews was a series of brief, rapid-fire spots on the evening news bulletins.

By contrast, Opposition Leader Matthew Guy was everywhere. On Nine’s Today Show, on ABC Breakfast, on Sky News and on Kiss FM Radio, he spruiked the Coalition’s plan to use $10 billion of Future Fund money to retire debt and repeatedly urged undecided voters to take the plunge: “Don’t wake up on Sunday with a Daniel Andrews hangover,” he repeatedly intoned: a line lifted from the party’s advertising campaign. 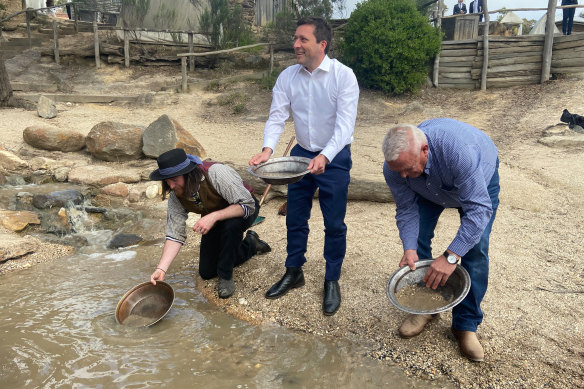 There are a few reasons for this. Guy has spent the entire campaign trailing in the polls and, so it follows, has more work to do.

The electorate is particularly fractious, with much of the post-COVID discord gathering outside the early polling booth in Mulgrave.

Andrews said he voted early with his wife and two adult children at a city booth because it was the most convenient time and place for them to do it. When asked if some of the Mulgrave campaign had become unsavoury, he carefully replied: “I’m not making any comments about any particular booths but I think voters just want to vote. I think we should always cherish that.” 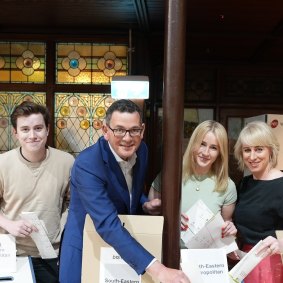 Daniel Andrews and his family cast their votes on Thursday, away from his electorate of Mulgrave.Credit:Twitter

There is a growing view among campaign strategists from both sides of politics that traditional media outlets, whether this masthead or others, don’t influence people’s voting behaviour like they used to.

And most tellingly, Labor strategists believe that a significant chunk of the electorate has turned off Andrews.

Dislike of the leader is not as potent a factor as it was in this year’s federal election, when there was a visceral rejection of Scott Morrison, but the anti-Andrews sentiment being detecting in internal Labor polls and focus groups is strong enough to raise an intriguing question.

What should you do if you are a voter who likes what Labor is offering but wants to see the back of the premier?

When Andrews was asked this earlier in the week, he showed the briefest flash of annoyance before returning to his campaign theme : “My message to every Victorian voter is the only way to get the projects we need is to vote Labor. The only way to make kinder free and bring back the SEC – government owned renewable energy – is to vote Labor.” 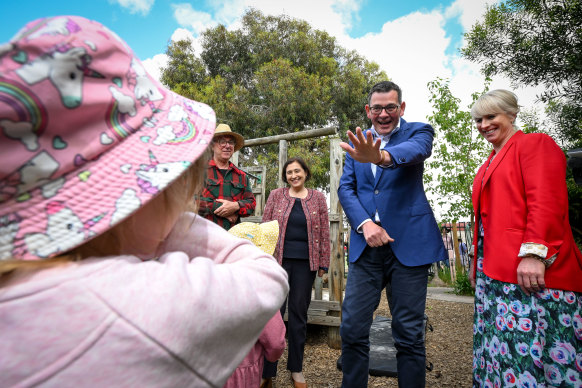 The Westgarth Kindergarten was an ideal place for Andrews to make his closing argument. The sign at the front gate of the adjacent primary school promises “Safe, Fair and Friendly” and the kinder would benefit from one of the $5000 grants Andrews announced on Friday to help pre-schools buy toys or other play equipment.

Not for the first time in this campaign, every child will get a prize.

Free kinder. Free TAFE. Massive government investment in renewables and bringing back the SEC. The Big Build. The bullet points of Labor’s election pitch are by now well ingrained in the mind of any voter who has been paying attention.

Over recent days, Andrews has added a twist, warning in increasingly alarmist tones about the Coalition’s purported plans to “cut, close and cancel” everything that isn’t nailed down. “These Liberals have got candidates running who are opposed not just to free kinder, they are opposed to kinder itself,” he said, referring to rogue Narre Warren candidate Timothy Dragan, who said recently: “I don’t even support the idea of kinder.” Suddenly revealed! A secret Liberal plan to kill kindy.

Matthew Guy dedicated the final day of his campaign to the fiscal consequence of the government’s enormous infrastructure agenda and pandemic spending, the state’s looming $167 billion debt.

Guy isn’t promising austerity measures and not much financial restraint. Instead, the Coalition has vowed to cash out the state’s recently established Victorian Future Fund and use the money to pay off debt. It’s more or less what the fund was intended to do, albeit to accumulate over time and offset borrowings. The fund is forecast to reach $10.9 billion by the time of the next election and the Coalition says it will use $10.2 billion of this money to retire debt.

This 11th hour policy emerged on the second last day of the campaign, when the respective treasury spokesmen made cameo appearances to explain how much their party’s election promises would cost.

Inside the spacious surrounds of the Carson Conference Centre, a 430-seat auditorium within the $73 million union branch office building of the Australian Nursing and Midwifery Foundation, Treasurer Tim Pallas stood on stage before a towering red screen emblazoned with Labor’s catch-all appeal to pragmatism: Doing what matters. 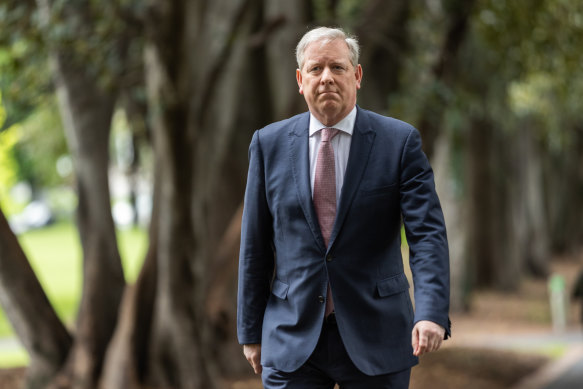 Labor’s costings were distributed in a glossy pamphlet with the ubiquitous iconography of the Andrews government: win turbines on a hill, nurses at a bedside, a smiling tradie in high-vis and of course, the Multiplex cranes more recognisable to Melburnians than the Concert Hall spire.

Victoria’s finances are not so glossy. Nonetheless, having squeezed what he could out of budget contingencies, Pallas sought to make virtue of promising to return a $1 billion budget surplus four years from now. The only red we’ll see is the massive, projected screen behind him, he quipped. He put the total campaign spend at $11.7 billion.

A few hours later, it was opposition spokesman David Davis’ turn. Journalists were led into a cramped, disused meeting room on the second floor of a city office building the Liberals are renting for their campaign headquarters. The room was hot and stuffy and the press conference which followed a sticky mess.

The first question, by Seven news’ Sharnelle Vella, should have been a doddle. How much do your total election promised add up to? Davis rifled through his A4 papers like a student who hadn’t read his own homework.

“Ah … I can’t give you the figure. I could get that for you.” The answer, provided by Guy a day later, is spending of $28 billion against savings of $38 billion.

Given the Coalition started this campaign needing to win an additional 18 seats to form a majority government, the chances of Matthew Guy becoming premier on Saturday still seem as likely as striking it rich at Sovereign Hill. But then, the opposition leader has only ever been the other Guy in this election.

Everyone knows who the central character of this play is, just not how it will end.