‘In her voice, we could feel our history’: The Obamas offer heartfelt tribute to Aretha Franklin as Trump remembers her as ‘someone who worked for me’

Franklin, known as the ‘Queen of Soul’, died at the age of 76 at her Detroit home from pancreatic cancer, her family said in a statement on Thursday morning.

Hundreds of fans, friends and fellow singers have flooded social media with heartwarming tributes to Franklin, including her long-time friends Barack and Michelle Obama.

‘America has no royalty. But we do have a chance to earn something more enduring. Born in Memphis and raised in Detroit, Aretha Franklin grew up performing gospel songs in her father’s congregation. For more than six decades since, every time she sang, we were graced with a glimpse of the divine,’ their joint statement read.

‘Through her compassion and unmatched musicianship, Aretha helped define the American experience. In her voice, we could feel our history, all of it and in every shade – our power and our pain, our darkness and our light, our quest for redemption and our hard-won respect. She helped us feel more connected to each other, more hopeful, more human. And sometimes she helped us just forget about everything else and dance. Former president Barack Obama and Michelle released a joint statement reflecting on the life  of Aretha Franklin, a long-time friend 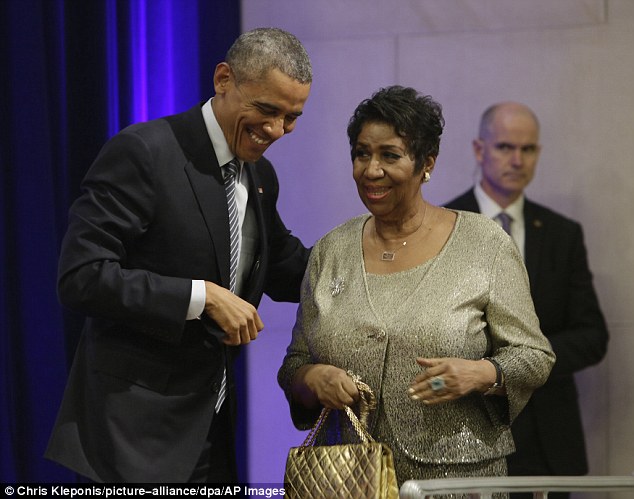 Obama welcomes Aretha Franklin as she arrives to sing at the portrait unveiling ceremony for outgoing U.S. Attorney General Eric Holder at The Department of Justice in Washington, DC, February 27, 2015 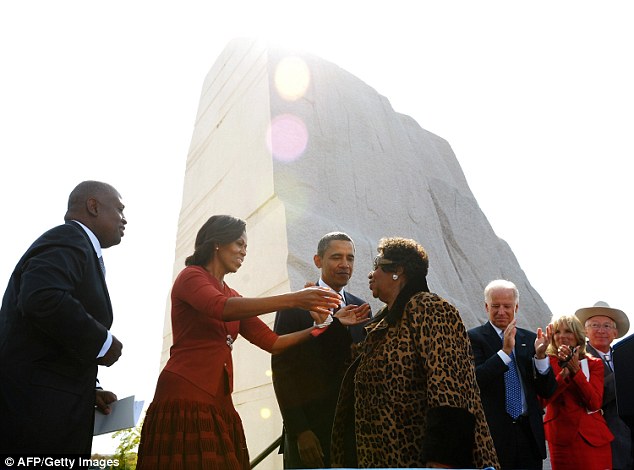 Franklin is pictured right with former president Barack Obama and his wife Michelle at the dedication of the Martin Luther King Jr. Memorial on October 16, 2011 in Washington, DC 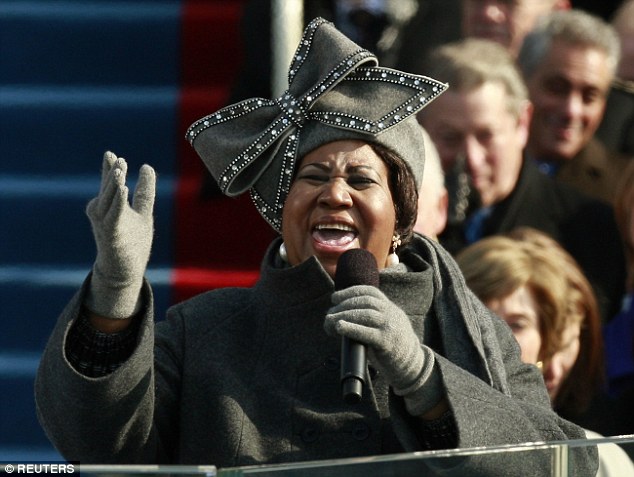 Franklin also performed ‘My Country, ‘Tis osf Thee’ at Obama’s inauguration in 2009. She’s pictured performing at the ceremony in January 2009

‘Aretha may have passed on to a better place, but the gift of her music remains to inspire us all. May the Queen of Soul rest in eternal peace. Michelle and I send our prayers and warmest sympathies to her family and those moved by her song.’

Franklin performed at Barack’s inauguration in 2009, where she sang ‘My Country, ‘Tis of Thee’. She also brought the former president to tears when she performed a rendition of ‘(You Make Me Feel Like) A Natural Woman’ at the Kennedy Centers Honorees tribute to co-writer Carole King in 2015.

The Obamas’ tribute to Franklin comes after president Donald Trump was slammed for saying in a statement that she worked for him on ‘numerous occasions’.

‘I want to begin today by expressing my condolences to the family of a person I knew well. She worked for me on numerous occasions. She was terrific — Aretha Franklin — on her passing,’ Trump said, adding that she brought ‘joy to millions of lives’.

‘Her extraordinary legacy will thrive and inspire many generations to come. She was given a great gift from God — her voice, and she used it well,’ he said. ‘People loved Aretha. She was a special woman. So just want to pass on my warmest best wishes and sympathies to her family.

First lady Melania Trump has yet to comment on the death, while Ivanka Trump posted a message on her Instagram Story calling the singer ‘an artistic genius and trailblazer’.

Earlier on Thursday, Trump had posted a single tweet on Franklin’s passing, writing: ‘The Queen of Soul, Aretha Franklin, is dead’.

The tweet continued: ‘She was a great woman, with a wonderful gift from God, her voice. She will be missed!’ 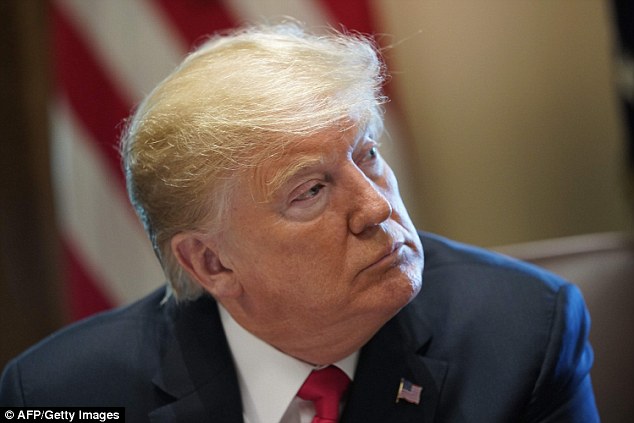 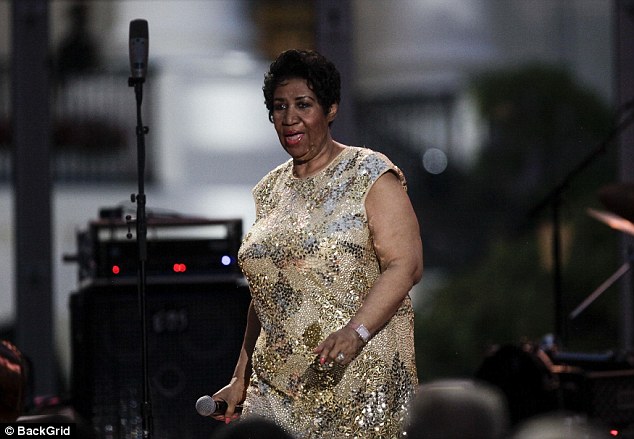 Franklin, known as the ‘Queen of Soul’, died at the age of 76 at her Detroit home from pancreatic cancer, her family said in a statement on Thursday morning

Hillary Clinton also posted a lengthy, heartfelt message to Franklin, whom she called her ‘friend’.

‘Mourning the loss today of @ArethaFranklin who shared her spirit and talent with the world. She deserves not only our RESPECT but also our lasting gratitude for opening our eyes, ears and hearts. Rest in eternal peace, my friend,’ she tweeted.

‘Like people all around the world, Hillary and I are thinking about Aretha Franklin tonight & listening to her music that has been such an important part of our lives the last 50 years,’ he wrote. ‘We hope you’ll lift her up by listening and sharing her songs that have meant the most to you.’

Franklin passed away at 9.50am surrounded by family and friends at her home in Detroit where she had been under hospice care, a statement read.

Franklin’s family said her oncologist confirmed her cause of death was due to the pancreatic cancer she had been battling.

‘In one of the darkest moments of our lives, we are not able to find the appropriate words to express the pain in our heart. We have lost the matriarch and rock of our family,’  her family said. 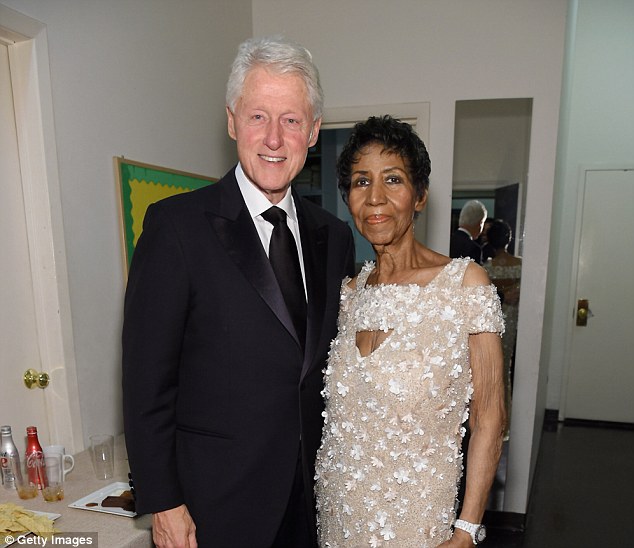 ‘We hope you’ll lift her up by listening and sharing her songs that have meant the most to you,’ former president Bill Clinton posted about Franklin shortly before her death. Clinton and Franklin are pictured at an event in November 2017 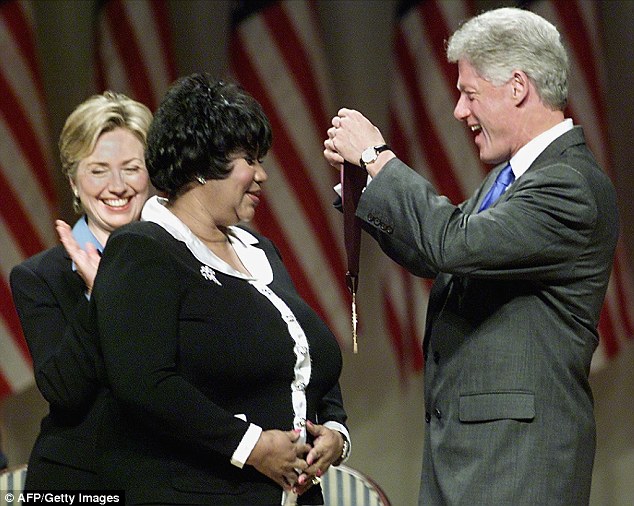 Hillary Clinton tweeted that Franklin not only deserves our ‘RESPECT but also our lasting gratitude for opening our eyes, ears and hearts’. The singer is pictured above with the Clintons at the National Medal of Arts and Humanities Award in Washington, DC in September 1999 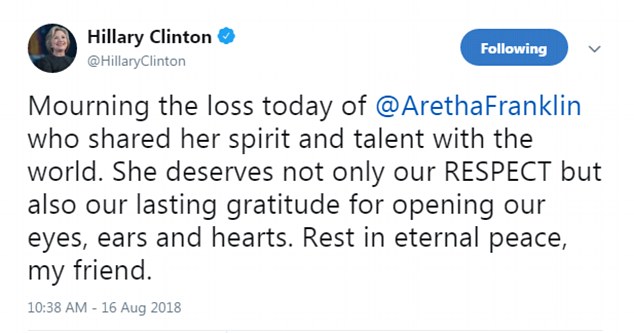 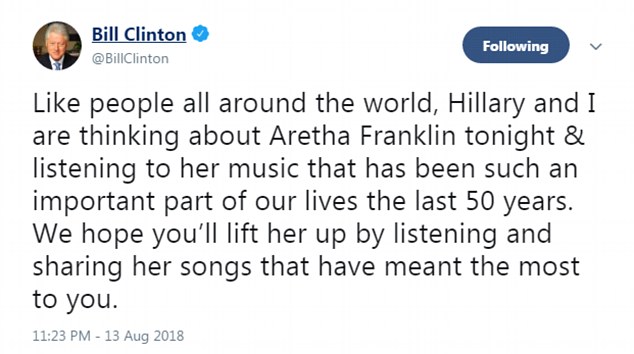 On Wednesday night, former president Bill Clinton tweeted that he and Hillary were ‘thinking about Aretha Franklin & listening to her music’

‘We have been deeply touched by the incredible outpouring of love and support we have received from close friends, supporters and fans all around the world. Thank you for your compassion and prayers,’ the family continued.

‘We have felt your love for Aretha and it brings us comfort to know that her legacy will live on. As we grieve, we ask that you respect our privacy during this difficult time.’

Funeral arrangements will be announced in the coming days.

Since news of Franklin’s death, celebrity tributes have been pouring in on Twitter.

Clive Davis, the music mogul who brought her to Arista Records and helped revive her career in the 1980s, said he was ‘devastated’ by her death.

‘She was truly one of a kind. She was more than the Queen of Soul. She was a national treasure to be cherished by every generation throughout the world,’ he said. ‘Apart from our long professional relationship, Aretha was my friend. Her loss is deeply profound and my heart is full of sadness.’

Smokey Robinson, who grew up with her in Detroit, said: ‘This morning my longest friend in this world went home to be with our father. I will miss her so much but I know she’s at peace.’ 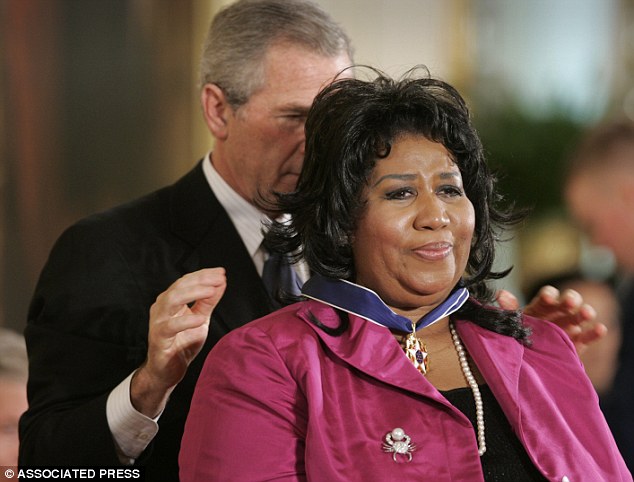 Hundreds of fans and friends have been sharing tributes to Franklin. The singer, who died at the age of 76, is pictured in 2005 as former president George Bush awards her with the Presidential Medal of Freedom Award 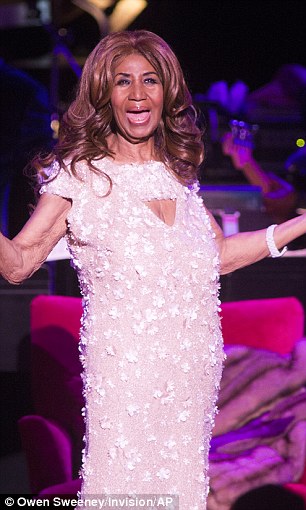 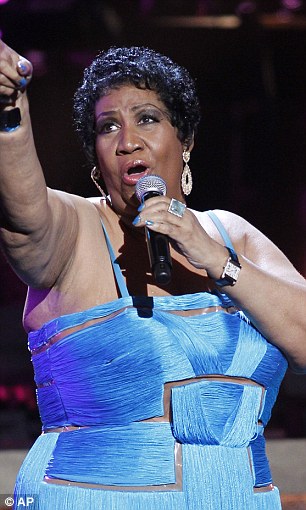 Soon after news of her death was announced, celebrities took to social media to mourn the loss of the Queen of Soul. John Legend, Barbra Streisand and The Clintons were among the first to share touching notes about Franklin.

Streisand wrote that it’s ‘difficult to conceive of a world without her’ alongside a photo of them together in 2012.

President Bill Clinton and wife Hillary issued a joint statement saying they were mourning the loss of their friend and describing her as a ‘national treasure’. They wrote: ‘For more than 50 years, she stirred our souls. She was elegant, graceful, and utterly uncompromising in her artistry.’

‘She will forever be the Queen of Soul and so much more to all who knew her personally and through her music. Our hearts go out to her family and her countless fans.’ 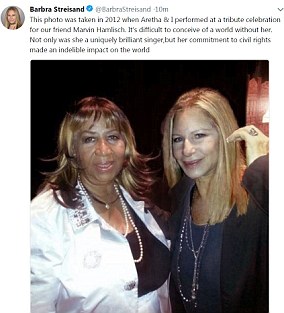 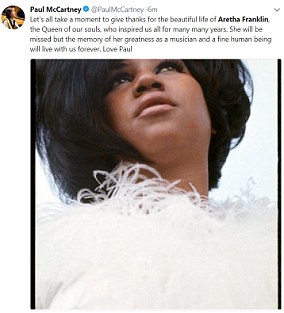 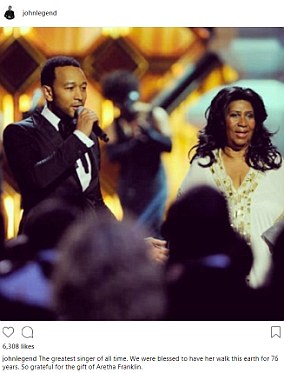 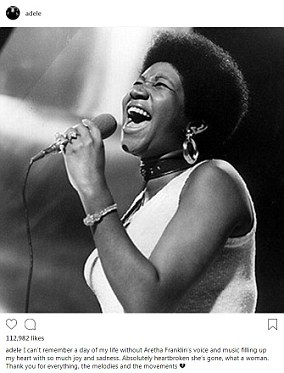 Elton John memorialized his ‘favourite pianist’ in a series of notes shared on Twitter: ‘The loss of @ArethaFranklin is a blow for everybody who loves real music: Music from the heart, the soul and the Church. Her voice was unique, her piano playing underrated – she was one of my favourite pianists.

‘I was fortunate enough to spend time with her and witness her last performance – a benefit for @ejaf at St John The Divine Cathedral. She was obviously unwell, and I wasn’t sure she could perform. But Aretha did and she raised the roof.

‘She sang and played magnificently, and we all wept,’ Elton wrote. ‘We were witnessing the greatest soul artist of all time. I adored her and worshipped her talent. God bless her. My condolences to all her family and friends. We shared the same birthday – and that meant so much to me.’

Diana Ross wrote that she was ‘sitting in prayer for the wonderful golden spirit Aretha Franklin.’

Paul McCartney also shared a touching note, saying: ‘Let’s all take a moment to give thanks for the beautiful life of Aretha Franklin, the Queen of our souls, who inspired us all for many many years. She will be missed but the memory of her greatness as a musician and a fine human being will live with us forever. Love Paul’