Barbara Corcoran is issuing a heartfelt apology in the direction of Whoopi Goldberg after fielding criticism for making what she called a “joke” about the “Sister Act” star on “The View” Thursday.

“I just came back from ‘The View’ and saw my old friend Whoopi,” the “Shark Tank” star, 72, began in a video shared to Twitter. “She has a phenomenal sense of humor, and I’ve known Whoopi for years.”

Corcoran continued: “I made a joke at Whoopi’s expense, which I now realize wasn’t funny. For anyone who I may have offended unintentionally, I just wanted to say I really am very sorry.”

The moment in question came when Corcoran was explaining to the panel that Emma Grede – the founder and CEO of denim brand Good American – will be the first Black, female guest shark on “Shark Tank.” The brand is also championed by Khloé Kardashian for its all-inclusive styling.

Co-host Sunny Hostin, 52, was praising the business model of developing jeans in various sizes, to which Goldberg, 65, quipped, “Well, I have to try them,” joking, “Will they fit this COVID [butt]?” 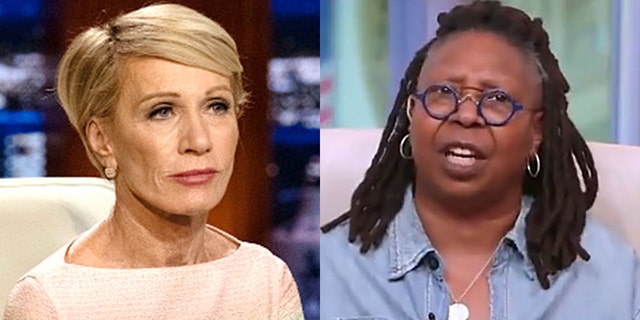 Barbara Corcoran is issuing a heartfelt apology in the direction of Whoopi Goldberg after fielding criticism for making what she called a ‘joke’ about the EGOT holder on ‘The View’ Thursday.
(Getty/The View)

While Hostin and fellow co-host Ana Navarro, 49, were adamant the jeans would, in fact, fit Goldberg, Corcoran found an opportunity within the banter to poke fun at the 65-year-old.

“When you get finished with those jeans and decide you don’t like them, give them to me. I’m gonna make two pairs,” said the entrepreneur – prompting Navarro to come to the aid of Goldberg, who appeared taken aback by the remark.

“Whoopi, let me just tell you something. Both Sara Haines and Jill Biden wore that dress already, on TV,” Navarro fired back in reference to the floral dress Corcoran was wearing.

Following the now-viral spat, fans quickly took to social media to lend their own two cents about the exchange – with one person writing, “Ana is that girl! Ride or die and I love her for it! @ananavarro said don’t you come for Whoopi!”

“Barbara Corcoran went too far,” the viewer added and included a GIF of a laidback Rep. Alexandria Ocasio-Cortez, D-N.Y.

“I can’t believe what Barbara Cochran [sic] said to Whoopi about those Jeans [sic],” another Twitter user wrote. “Hurtful was the look from Whoopi, but she rebounded.”

“I had to rewind and listen again just to be sure I heard right,” added another viewer. “But, being a lot smaller than @WhoopiGoldberg doesn’t make @BarbaraCorcoran a better person and this should be a learning lesson for young girls.”