Home » World News » They were safe, now dozens of Australians are caught in war again

Tess knows war when he sees one. The 61-year-old Australian was in no doubt his former home in Ethiopia was in strife when he saw the fighter jets roaring above his hotel.

Tesfahum "Tess" Wubneh came to Australia in 1991, via a refugee camp in Sudan, after fleeing the Ethiopian civil war. He was back there for an extended holiday around Orthodox Christmas when the pandemic hit and he got stuck. Then in November the jets came. 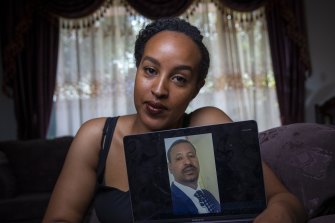 Shewit Tesfahun, an Australian of Tigrayan descent, successfully helped her father, Tesfahum Wubneh (seen in the portrait), flee the war and get back to Australia on the weekend.Credit:Wayne Taylor

"It was midday. I saw the MiG jet coming, too noisy. I could see the plane dropping four bombs together. There was a church there."

"I'm grateful that I am here and safe now," Wubneh says by phone from Brisbane where he doesn't mind being locked in quarantine.

He was one of up to 80 Australians trapped in Mekele, capital of Tigray, northern Ethiopia, when Prime Minister Abiy Ahmed, the 2019 Nobel Peace laureate for his efforts to settle differences with Eritrea, ordered a military assault on the region's People's Liberation Front (TPLF) government on November 4. Government forces had already encircled the city of 520,000, and warned residents to stay away.

"The war broke out about 10pm. Immediately the air bombardment started. The telephone went off, internet went off. There was no communication, no banking in the morning. They closed everything, we had no money, no food. It was shocking, it was scary."

Tess, as he is known in Australia, left his hotel and hid in a friend's place only to be confronted with more bombing, shattering windows, the sight of injured children and the news that a pregnant woman was killed in the air raid.

"I saw them bombard the church. They were 10 or 12-year-old students in bible study to become priests. There is no military there, no [rebel] camp. Just a church, a stadium and a residential area."

Reuters reports Abiy's government and the TPLF have both accused each other of targeting civilians in the conflict that. Abiy ordered the assault after accusing the TPLF of crossing a red line by attacking its northern command and attempting to rob it of artillery and military equipment. 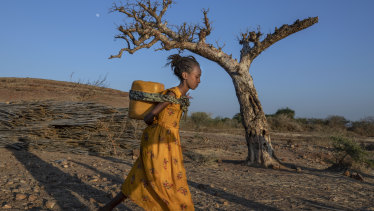 A Tigray woman who fled the conflict in Ethiopia’s Tigray region, carries water on her back, at Umm Rakouba refugee camp in Qadarif, eastern Sudan.Credit:AP

It followed tensions over a regional election held even though the pandemic prompted the national government to delay its poll. Abiy's administration called the Tigray election illegal.

The two sides used to be in a governing coalition that collapsed last year. In October, the Agence-France Presse reported the federal parliament slashed funding to the region, a decision a top Tigrayan official said was "tantamount to a declaration of war".

An Abiy government statement said the offensive was a law-enforcement operation "to save the country and the region from spiralling into instability". Locals disagree.

"What kind of law enforcement is this? It’s carpet bombing," Tess says. 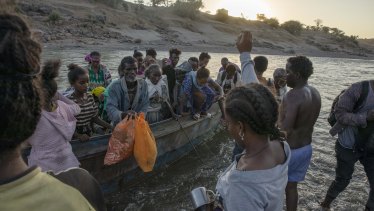 Tigray refugees arrive on the banks of the Tekeze River on the Sudan-Ethiopia border, in Hamdayet.Credit:AP

Abiy this week said the mission was over and the region returned to federal hands. But reports of fighting continue.

Tess' daughter Shewit Tesfahun is relieved to have her father back on Australian soil, but is worried about friends and family still in Tigray and across the border in newly arranged refugee camps in Sudan. Like him, most had gone to visit relatives at the beginning of the year and couldn't return because of COVID travel restrictions. She had just made it back from introducing her one-year-old to family when the borders closed in March.

"I have my uncle, my mother's brother, there. My cousin had a bridal suite in the hotel that got bombed. I saw photos that it was all destroyed. It wasn’t like that before – it was the new hip spot."

She's working with the Tigrayan diaspora in Melbourne to press for more evacuations and the establishment of a permanent humanitarian corridor so food and aid can flow to the region.

"I think of all my friends, their voices aren’t been heard. They need food, water, electricity. We have no news. The Prime Minister declared it’s over, how can they say that?"

After days spent travelling by bus and sleeping on the side of the road with another Australian from Perth as they fled to the national capital, Addis Abba, Tess secured a flight home with the help of the United Nations and the Australian embassy, but his daughter wants the government to do more. 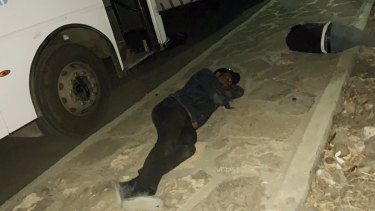 Tesfahum “Tess” Wubneh and a friend sleep on the road on the way to Addis Abba after fleeing the fighting in Tigray.

"We need to push for the phone lines to be opened and for an international investigation. People are dying, people need to step in. It's OK to stop an election because of COVID, it's not OK to start a war."

The UN has warned of genocide as ethnic Tigrayans are targeted. 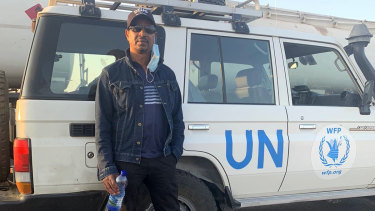 Tesfahum “Tess” Wubneh is thankful for the help he received from the UN and the Australian embassy, but is worried about dozens of Australians trapped in Tigray.

Saba Alemayoh has been the community's point of contact with DFAT and Home Affairs.

She wants the Morrison government to ask for de-escalation, for a humanitarian corridor, and for independent journalists and investigators to be let in.

"I truly believe this is going to be another war crime if the international community doesn't do this."

She says people from Tigray are subject to ethnic profiling wherever they go and many are not succeeding in getting help to evacuate.

DFAT did not reply to a request for comment. It has established a phone line for those seeking to depart Tigray or needing emergency consular assistance. Its Smartraveller website has listed Ethiopia and neighbouring Eritrea as do-not-travel destinations.

On Saturday, Ethiopia said it had captured or killed most commanders of a rebellious northern force, while Tigray's fugitive local leader countered on Friday that civilians were protesting against looting by occupying soldiers. Neither side gave proof for their assertions about the month-long war.

Getachew Reda, a senior adviser to the Tigray leader, in an interview with Tigray TV urged young people and others in the region to "rise and deploy to battle in tens of thousands", the AP said on Friday.

Alemayoh wants the Australian government to remember Australians there are not dual citizens. They were born here or have had to relinquish Ethiopian citizenship after settling here.

"People are running out of money, out of stuff. We can't transfer money. We don't know if Australians are injured or killed," she says.

It is not clear how many people perished as Ethiopian forces moved in on Mekele, but the International Committee of the Red Cross said the city’s largest hospital had run out of bodybags.

Among the dead were at least five humanitarian workers, AP reported. The UN said more than 100 aid workers were still unaccounted for.

"We are extremely concerned about the reports," UN humanitarian spokesman Saviano Abreu told the AP. "We have hundreds of colleagues still on the ground."