Home » World News » Tintin and the mystery of the duelling mummies

Tintin and the mystery of the duelling mummies: Two Belgian museums row over which of their exhibits inspired Herge’s mummified corpse of Rascar Capac in comic book

Herge’s fictional Inca has sparked a row between rival Belgian tourist attractions, each of which displays a mummy they say inspired Tintin’s creator.

The mummified corpse of Rascar Capac thrilled and terrified generations of young fans of the Tintin comic book story ‘The Seven Crystal Balls’.

The very serious Art and History Museum is in Brussels’ Jubilee Park, near where Herge used to live, and he was known to frequent its collections.

The museum’s Andean mummy, squatting upright with knees bent, appears similar to the haunting effigy in the author’s illustrated tale of the be-quiffed reporter Tintin’s adventure.

Curators thought they had established the link beyond doubt 10 years ago, but the Pairi Daiza safari park in southern Belgium is touting a rival mummy. 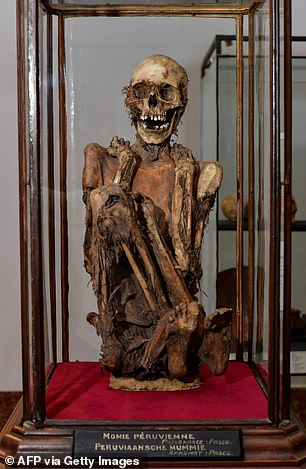 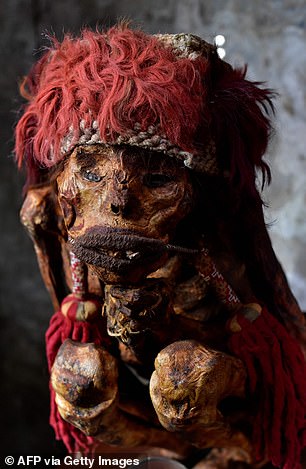 The Art and History Museum’s Andean mummy, squatting upright with knees bent, left, and the rival Inca mummy on display at the Pairi Daiza safari park in southern Belgium, right. Herge’s fictional Inca has sparked a row between the rival Belgian tourist attractions, each of which displays a mummy they say inspired Tintin’s creator

The royal museum is not taking this well, and has all but accused the zoo park of false advertising.

The zoo has expressed regret over an ‘argument started by the royal museums’ but admits that ‘no one can say for sure which mummy inspired Herge.’ 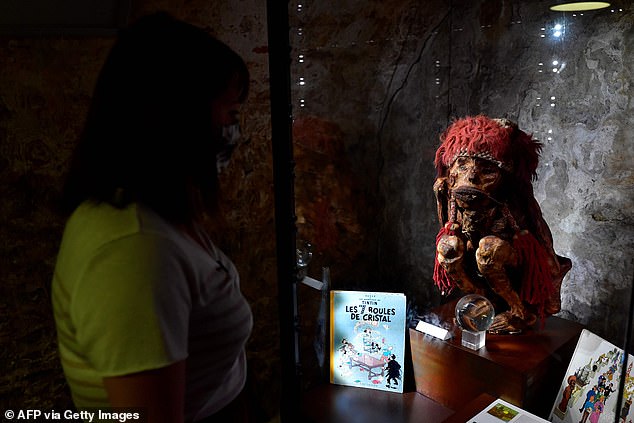 A visitor looks at an Inca mummy at the Pairi Daiza animal park in Brugelette, Belgium, on July 13, which the zoo claims it allegedly inspired Belgian cartoonist Herge for his character Rascar Capac, hero of the Tintin album ‘The Seven Crystal Balls’

If there is confusion, it dates back until at least 1979, when the 2,000-year-old preserved corpse now on display at the zoo appeared in Brussels at an exhibit titled ‘Tintin’s museum of the imagination’.

The collection was assembled to mark the 50th anniversary of the 1929 release of the boy reporter’s first book-length adventure, ‘Tintin in the Land of the Soviets’.

Author and illustrator Georges Remi – better known under his pen name Herge – attended the show, adding some credibility to the mummy’s significance.

But this, according to the Art and History Museum’s curator of Latin American relics, Serge Lemaitre, was a mistake.

The mummy in question had been bought by a Belgian collector in the 1960s, long after Herge published the ‘Seven Crystal Balls’ book in 1948.

‘And in the first frames serialised in 1941 in the newspaper Le Soir, Rascar Capac was hairless and had very bent knees, just like our mummy,’ Lemaitre says.

Herge lived near the Jubilee Park – still a popular spot in Brussels’ European quarter – and knew the museum and its curator Jean Capart well.

Capart even seems to have been fictionalised as Professeur Bergamotte – or Professor Hercules Tarragon in the English-language version of ‘The Seven Crystal Balls’. 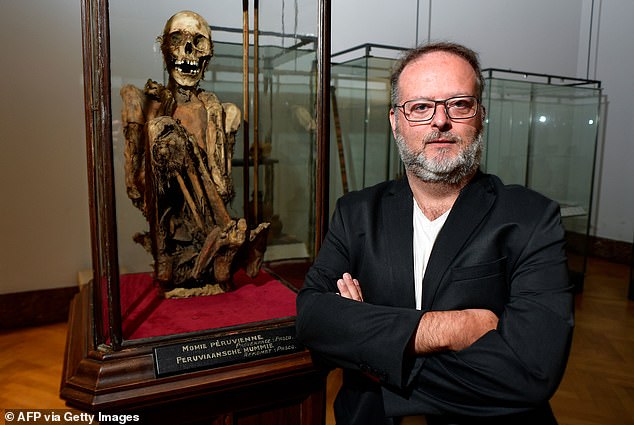 Serge Lemaitre, archaeologist and curator of the Americas collections at the Royal Museums of Art and History in Brussels poses on July 13 during a interview about the Inca mummy that allegedly inspired Herge

Not only that, but items drawn from other pieces in the museum’s ethnographic collections have appeared in the Tintin tales, notably a Peruvian figurine that inspired its eponymous twin in ‘The Broken Ear’.

The museum is thus confident in its claim, but – as is often the case in a Tintin mystery – the plot may have a further twist, according to independent expert Philippe Goddin.

‘We should stop arguing. Herge looked at lots of Inca mummies, but his first sketches of Rascar Capac are essentially based on a drawing in the Larousse dictionary,’ he said.

This is an explanation that will not suit anyone in Belgium, where tourist attractions have seized upon any Tintin link to exploit as a key draw.

The drawing in the Larousse was based on a mummy brought back from Peru by the 19th-century French explorer Charles Wiener and is today in the Quai Branly Museum in Paris.