EXCLUSIVE: Travellers invade cricket ground and hang up their washing forcing match to be CANCELLED

A Premier league cricket match was cancelled today after a group of travellers set up camp on the field of play.

Caravans and other vehicles illegally parked on the home of Chesterfield Cricket Club in Queen’s Park at 5pm yesterday, with the travellers making the field their own.

T-shirts, jeans and other bits of laundry have been left out to fry on a brick wall near the club’s pavillion, as the cricket players were left frustrated after their game had to be cancelled. 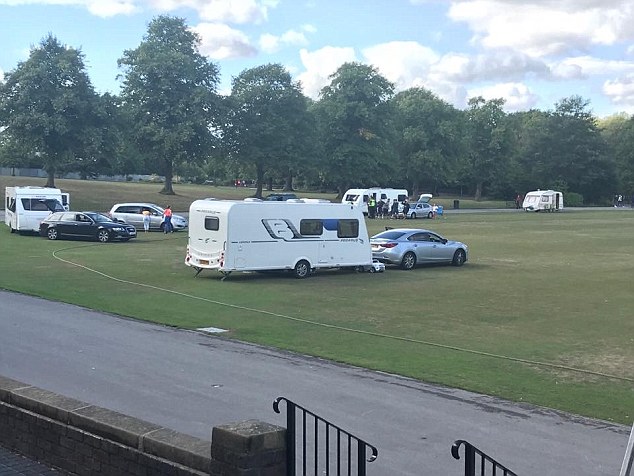 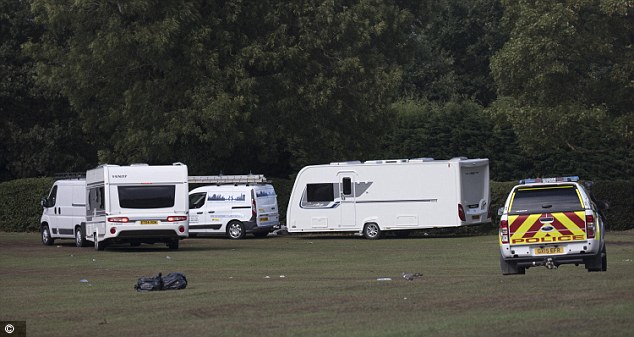 Chesterfield Cricket Club were due to play Derbyshire County Cricket Club today but the match has had to be postponed.

An under-nines final also had to be played at a different ground yesterday after the travellers refused to move.

Police were called to try and move the travellers on but they refused to budge.

Mike Taylor, chairman of Chesterfield CC, told MailOnline that there were around six or seven caravans, with around 40 travellers at the makeshift campsite.

He said: ‘There were a lot of children running around on the green and playing with the covers. At the time we were just pleading with them to move to another part of the park and they seemed willing to move on at first.

‘But then we got talking and they asked for money for ferry tickets back to Ireland. They were not pleased when they did not get any money and after that they became quite unhelpful.’

He added that local MP Toby Perkins played an instrumental part in helping to move the travellers on and helped speed along the process of issuing a Section 61 notice.

They were filmed leaving the field at around 12pm today.

Mr Taylor added: ‘I asked Toby Perkins if there was anything he could do. To give him credit, he got onto the police and crime commission, who in turn talked to the chief constable and decided to serve a Section 61 notice.

‘According to him, it’s the first time its been used in Derbyshire and it was very effective.

A number of caravans were parked in the centre of the cricket field, forcing the game to be cancelled

‘I was thinking they would have been their until Wednesday, and heavy rain is forecast for tomorrow and early next week. If they drove on the pitch when it was wet it could have caused all kinds of havoc.’

Despite being moved on, the game had to be cancelled as it did not look as if the travellers would move on today, Mr Taylor said.

Earlier in the day, Chesterfield Borough Council posted on Twitter: ‘We are taking legal action to remove a group of travellers who have illegally set up a camp on the cricket pitch within Queen’s Park. The police were also called and attended the scene.’

T-shirts, jeans and other bits of laundry have been left out to fry on a brick wall near the club’s pavillion