Phnom Penh: The trial of a top Cambodian opposition leader charged with treason began on Wednesday, more than two years after he was arrested in what is widely seen as a politically motivated prosecution. 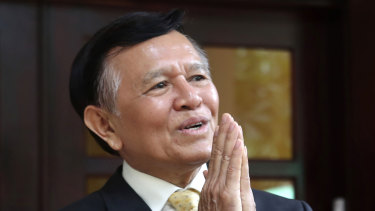 Kem Sokha was head of the Cambodia National Rescue Party when he was arrested in September 2017 on the basis of an old video showing him at a seminar where he spoke about receiving advice from US pro-democracy groups.

He could be imprisoned for up to 30 years if found guilty. His party was dissolved by Cambodia's Supreme Court in November 2017 on the same basis.

The actions were seen as intended to ensure victory by long-serving Prime Minister Hun Sen's Cambodia People's Party in the 2018 general election by eliminating the only credible opposition force. Cambodia's courts are considered to be heavily politicised and under government influence.

"I know strongly that I am totally innocent so I have to go to the court and challenge the charge and demand that they drop the case," Kem Sokha told reporters on Wednesday. "I have never done anything wrong so the court has to drop the charges." 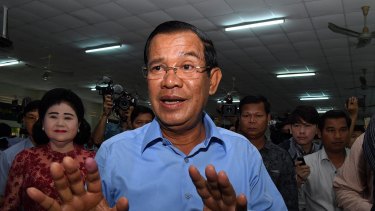 It was unclear whether the public would get a fair account of Kem Sokha's words, as the court had earlier announced there would be no room for journalists in the courtroom.

The human rights group Amnesty International called for the charges against Kem Sokha to be dropped.

"After two years held in arbitrary detention, the authorities have not presented a shred of credible evidence to support a charge of treason," said Nicholas Bequelin, the group's regional director.

"The non-existent crime was politically manufactured to further the suppression of the opposition party. The Phnom Penh Court must acquit Kem Sokha to bring an end to this mockery of justice," he said.

The trial begins at a politically delicate time for Hun Sen, as Cambodia faces likely trade sanctions from the European Union that could seriously damage its economy.

Hun Sen has been in power for 35 years and has vowed to serve two more 5-year terms in office.

His party swept all the seats in the National Assembly in the 2018 polls but drew condemnation from human rights groups and Western nations, which charged that the election was neither free nor fair. The US and Germany instituted some diplomatic sanctions against Cambodia.

More significantly, the EU began a process that could result in its withdrawal of preferential duty-free and quota-free status for imports from Cambodia because of deficiencies in labour and human rights. It is due to announce its decision in February.

The threatened action could badly hurt the Cambodia economy, which depends heavily on exports of low-cost textiles and footwear. The EU accounts for almost half of Cambodia's exports.

Cambodia is one of several developing nations with whom the EU has an "Everything But Arms" − or EBA − program granting preferential access to the European market for products other than weapons.

Hun Sen late last year made some gestures at political liberalisation, and the courts allowed Kem Sokha to be freed on bail after a period of tightly restricted house arrest. He is still banned from political activity.

The government may be resigned to the EU taking action against it. Hun Sen has publicly said he won't let Cambodia be pushed around and its low-cost export industries can survive without the benefit of the trade privileges.

The trial is expected to take up to three months, meeting twice a week, according to a report by the US-government-funded Voice of America quoting Phnom Penh Municipal Court President Taing Sunlay.

That would be long by the standards of many Cambodian trials, and means the verdict would be delivered after the EU announces its decision.

Although it has been several years since there have been any major street demonstrations in Cambodia, security has been beefed up across the country, especially in the capital and near the court where Kem Sokha is being tried.

Opposition supporters have been warned against provocative activities.