Trips over uneven pavements are costing councils £2million a year, with over 10,300 claims lodged in 2017

There were more than 10,300 claims but the true figure is likely to be higher as only 365 local authorities out of the 421 responded to a Freedom of Information request.

Motorists have long complained about the dangers posed by potholes on roads across the country, and 22 cyclists have been killed and 368 seriously injured as a result of them since 2007. 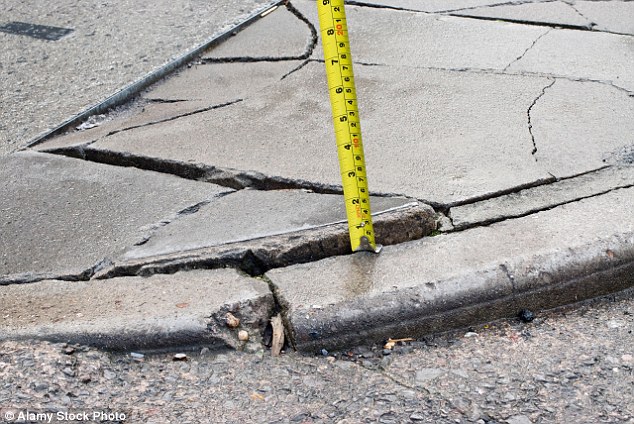 Compensation payouts for trips and falls on poorly maintained pavements cost councils just over £2million last year. There were more than 10,300 claims but only 859 were successful, with an average payment of £2,458

Now the shocking state of the nation’s pavements is laid bare by the figures obtained by the AA.

It comes after the Government published a £1.2billion plan last year to encourage people to leave their cars at home for short journeys and walk or cycle instead.

AA president Edmund King said: ‘The Government and local authorities repeatedly encourage drivers to leave their cars at home and take to their feet or to two wheels for short journeys.

‘But the state of the pavements means walkers are expected to run the gauntlet of hazards that are just as dangerous as the potholes that can injure or kill cyclists and damage cars.’

He added: ‘Pavements are particularly dangerous at night and more so in places where street lights are switched off after midnight to save money.

‘And that over 10,300 claims have been made in 12 months for pavement injuries confirms that walking can be like negotiating a minefield.’

A separate poll by the AA has revealed its members believe the country’s pavements are in just as poor a state as the potholed roads.

Not only are pedestrians having to watch their step on badly maintained surfaces, they are also encountering other hazards such as overgrown vegetation, temporary signs, badly sited lampposts and damaged drain covers.

But those who have tripped over a crumbling or uneven pavement are finding it difficult to extract money from their local council. 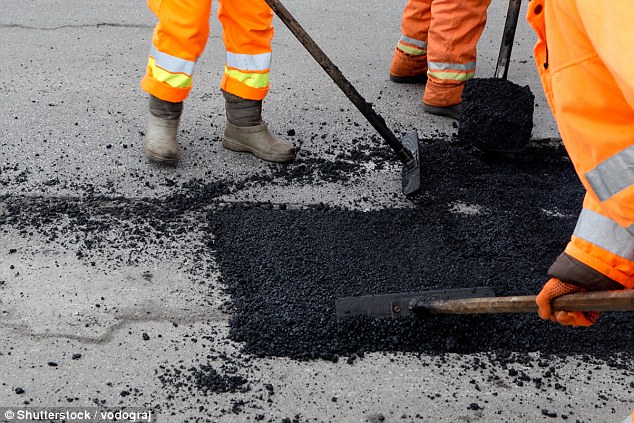 Of the 10,329 claims made over the year, only 859 were successful, with an average payment of £2,458. Many of the claims received by local councils are still being assessed.

Lancashire County Council received the largest number of claims, 512, of which 31 (6 per cent) have been successful. These claimants received £119,535 in total – or an average of £3,856 each. Some 311 claims are still being assessed.

Uneven pavements are most likely to be reported in the North West, according to the AA poll, with 77 per cent of respondents in the region saying they had experienced a problem. Northern Ireland appears to have the smoothest footpaths, with 61 per cent saying they had reported problems.

A spokesman for the Local Government Association said: ‘Councils know that the condition of pavements is a key priority for residents and want to make sure they are safe to use by all pedestrians. ‘Councils do a huge amount to maintain pavements with the resources available. Any deterioration of our roads and pavements is down to decades of under-funding from successive governments and recent severe winters.

‘Councils want to bring them fully up to scratch but need a fairer funding deal and greater government investment to allow this to happen.’

Deficiencies in dealing with potholes were highlighted at the inquest last year into the death of triathlete Kate Vanloo, 52.

She died when she was thrown into the path of a car on a lane in Warwickshire after cycling into a 4in-deep pothole that went unrepaired because workmen could not find it.