Trump hangs out with 180 bikers at his Bedminster golf club, where the leather-clad crowd heckled the press and led an impromptu Pledge of Allegiance

President Donald Trump has met with a group of 180 bikers at his golf club in Bedminster, New Jersey, reveling in the group’s loyal support as they bashed the press and recited the Pledge of Allegiance.

The group, made up of veterans and members of the New Jersey chapter of Bikers for Trump, descended on Trump National Golf Club on Saturday in a procession of chrome and roar of exhaust pipes.

Claiming nearly 100,000 members across the country, Bikers for Trump is a major grassroots organization that supports the Trump administration’s agenda.

Driving rain at first pushed a planned outdoor photo-op into the club’s ballroom, where the White House press pool was ushered in at around 3.30pm and greeted with noisy chants of ‘USA, USA!’ 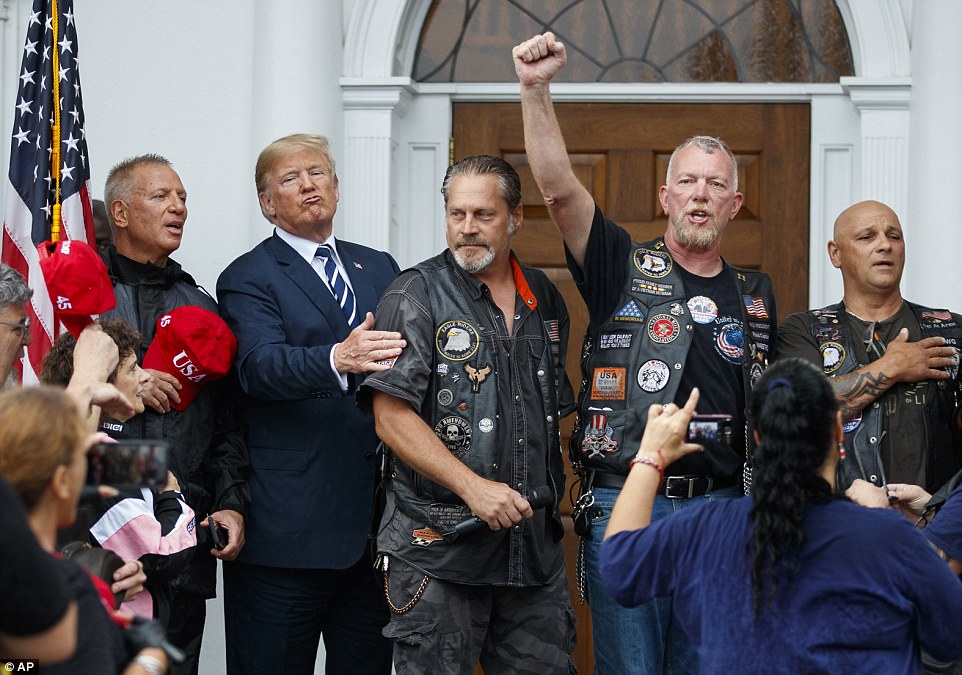 President Donald Trump stands in the rain with members of Bikers for Trump and supporters after saying the Pledge of Allegiance on Saturday at the clubhouse of Trump National Golf Club in Bedminster, New Jersey 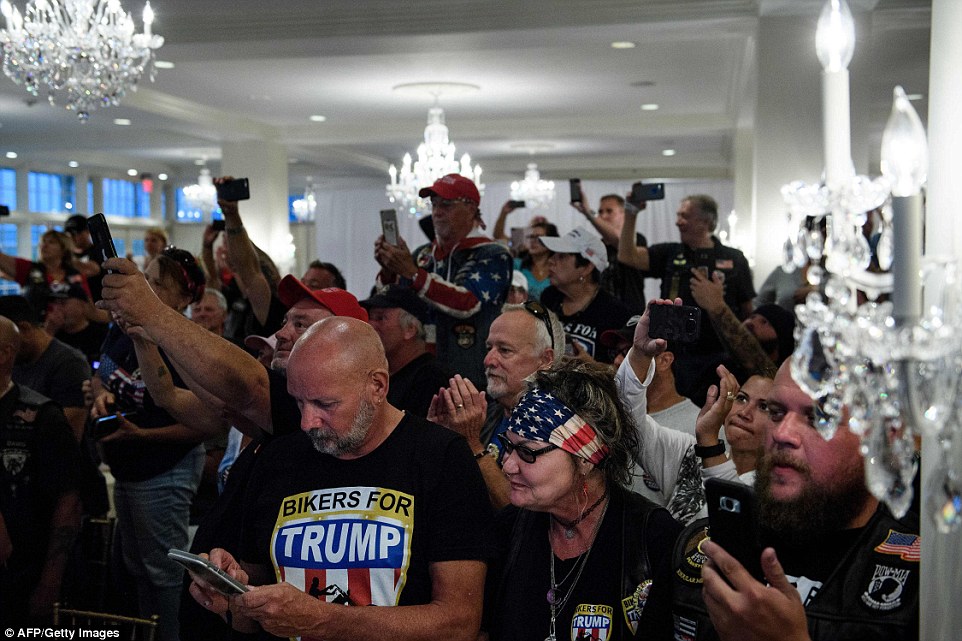 Driving rain at first pushed a planned outdoor photo-op into the club’s ballroom, where bikers crowded into the room 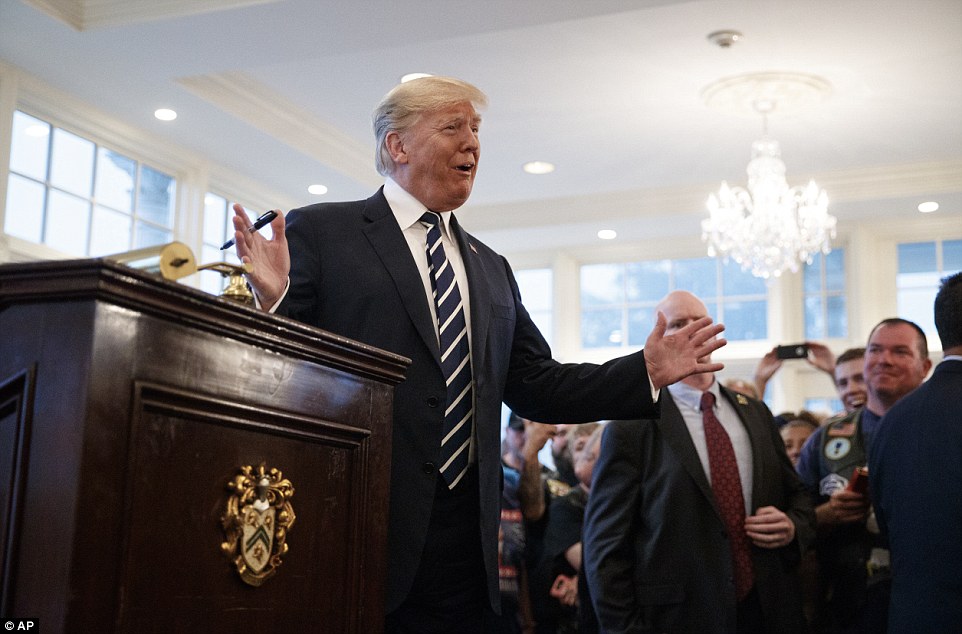 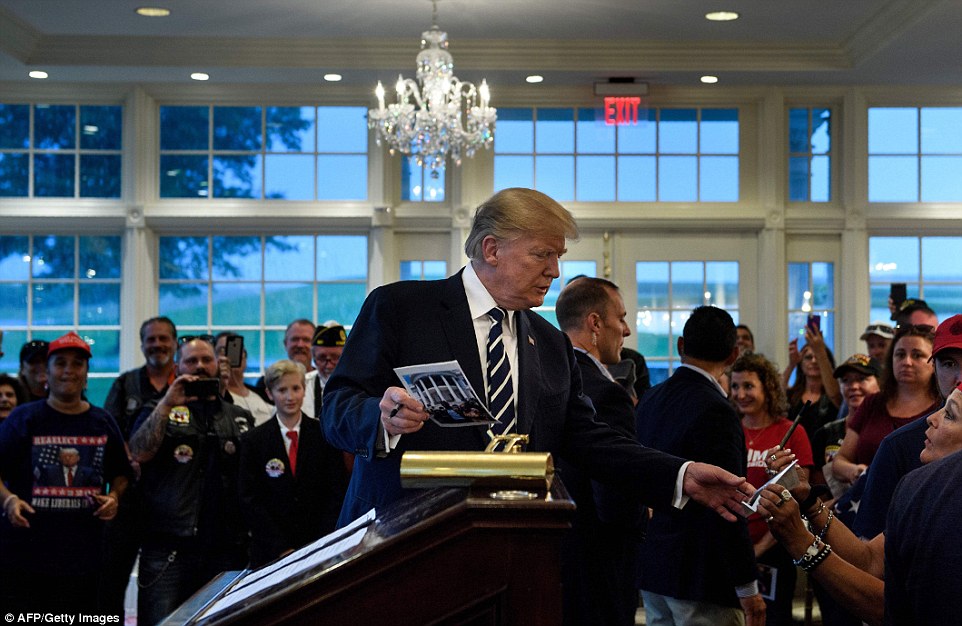 The President worked the ballroom, signing autographs and shaking hands as the bikers crowded around him 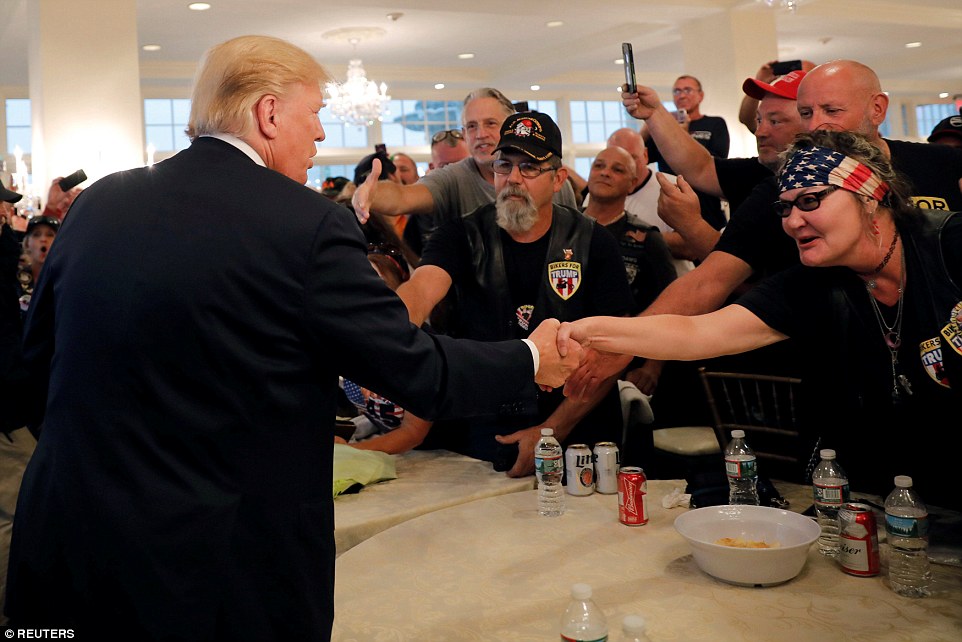 The bikers, who had been enjoying Budweiser and Miller Lite in the elegant ballroom, thrilled at the chance to meet Trump

The leather-clad crowd bunched closely to the podium, from whence Trump introduced the press corps.

Bikers responded with jeers of ‘tell the truth!’ and ‘we want Fox News!’

Trump thanked the bikers and said that they had been behind him since the beginning of his campaign.

After working the room, shaking hands with the rowdy crowd under the ballroom’s crystal chandeliers, Trump returned to the podium and prodded the bikers to share their considered opinion on the press.

‘Throw them out!’ one shouted, amid other jeers and heckles.

When one reporter shouted a question to Trump about NAFTA negotiations with Mexico, someone in the crowd quickly retorted ‘Build the wall!’ 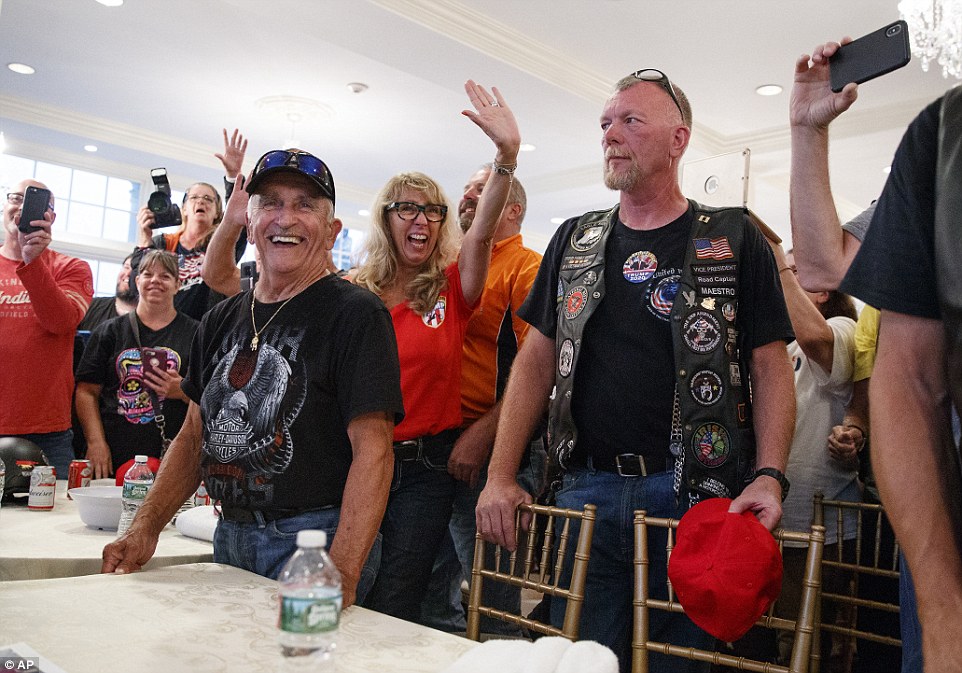 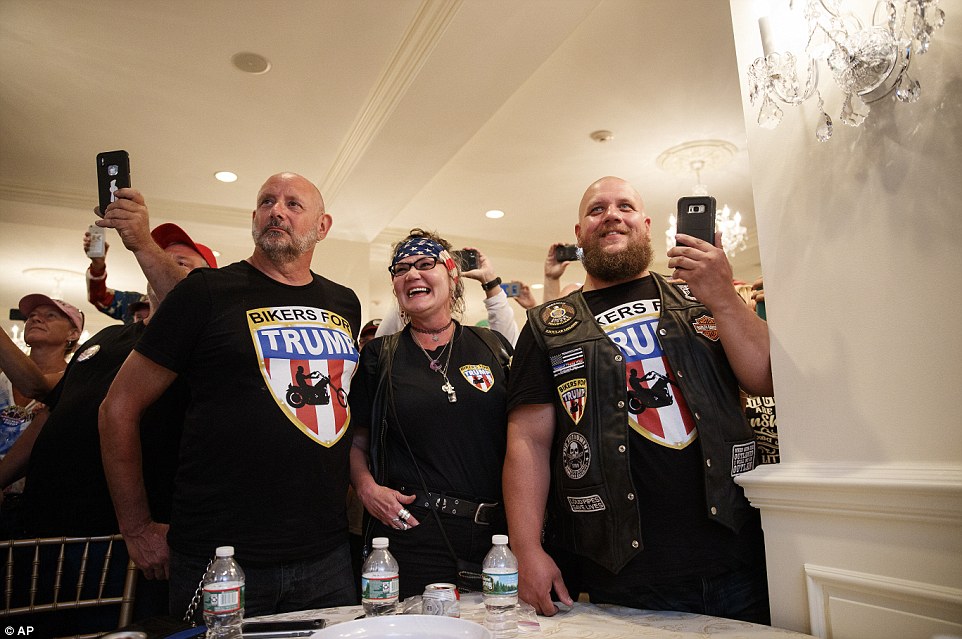 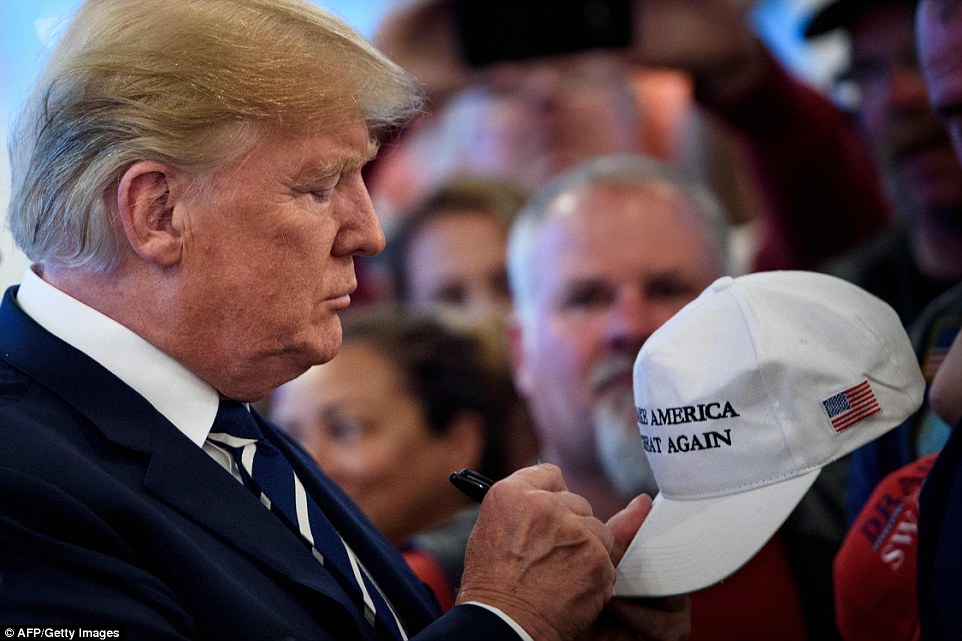 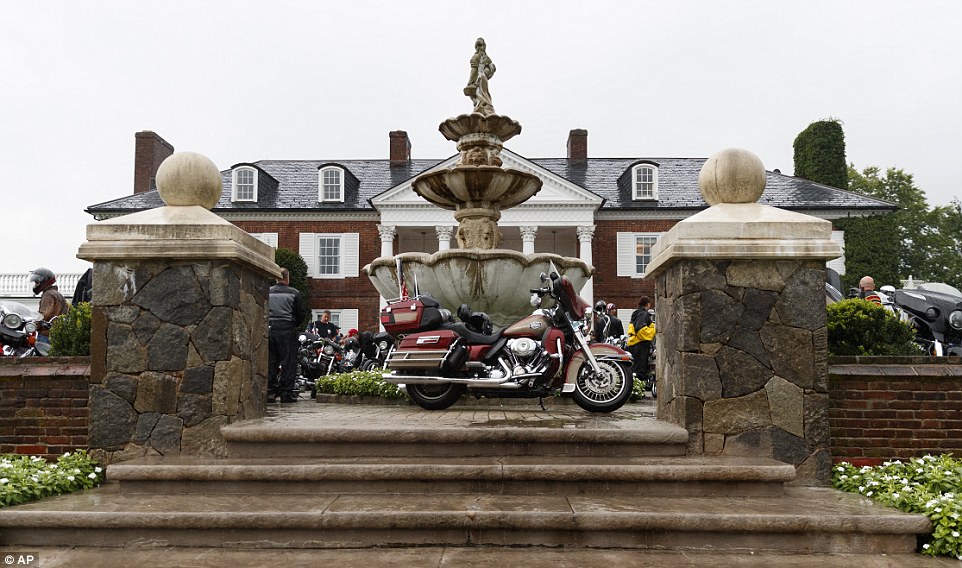 The President responded to one question shouted from the pool, regarding former aide Omarosa Manigault-Newman’s claim that there is a tape of him saying the n-word.

The pool then rolled out, but 15 minutes later reporters were brought around to the front of the residence for a second photo-op, with the rain easing up.

Survivor’s Eye of the Tiger played briefly, but was replaced with God Bless the USA as Trump strode out under the portico to greet the bikers.

A biker took a microphone and asked everyone to stand, including the press, and then led the crowd in a recitation of the Pledge of Allegiance. The pledge was punctuated by chants of ‘USA!’ and ‘Four more years!’ 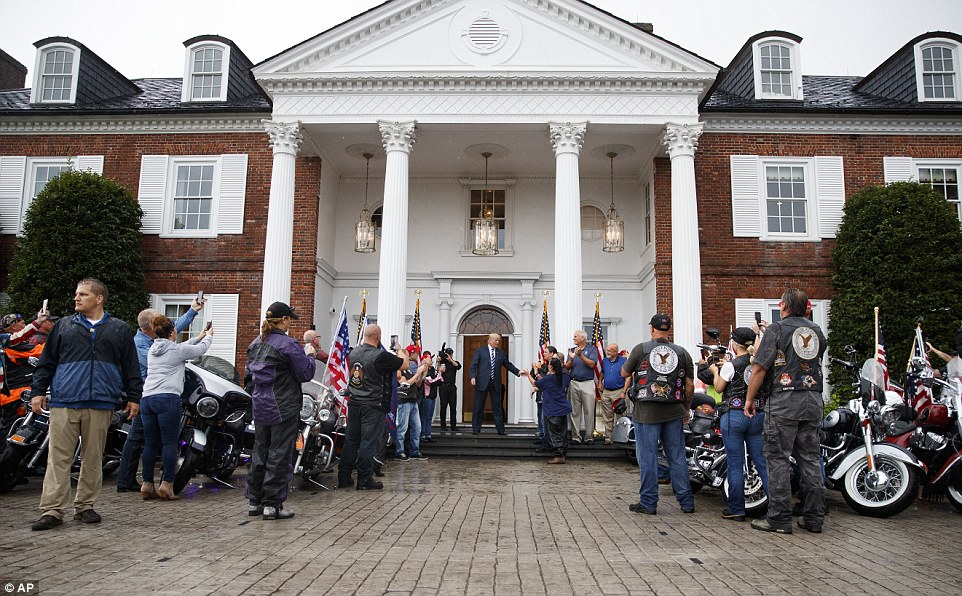 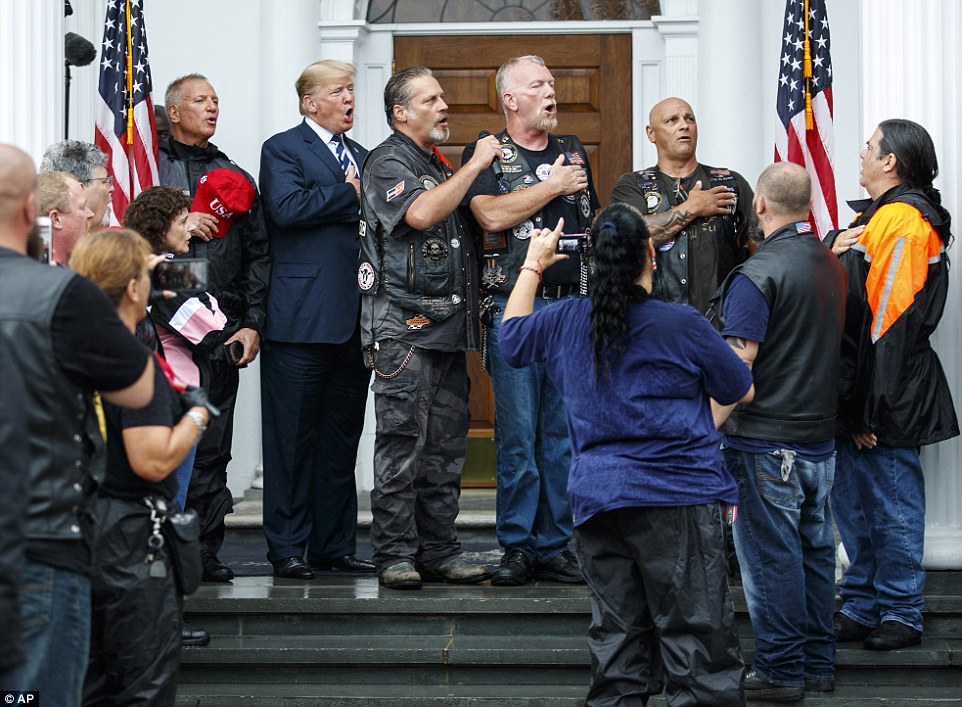 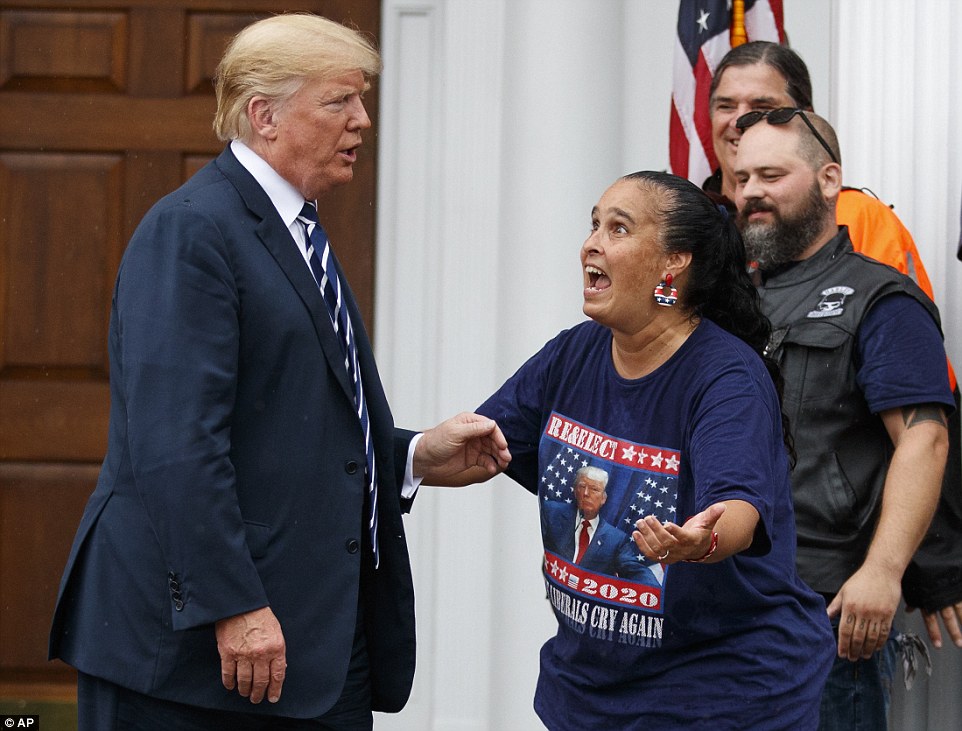 Bikers for Trump supporters where ecstatic to meet Trump at his New Jersey golf club. The fan group has 100,000 members 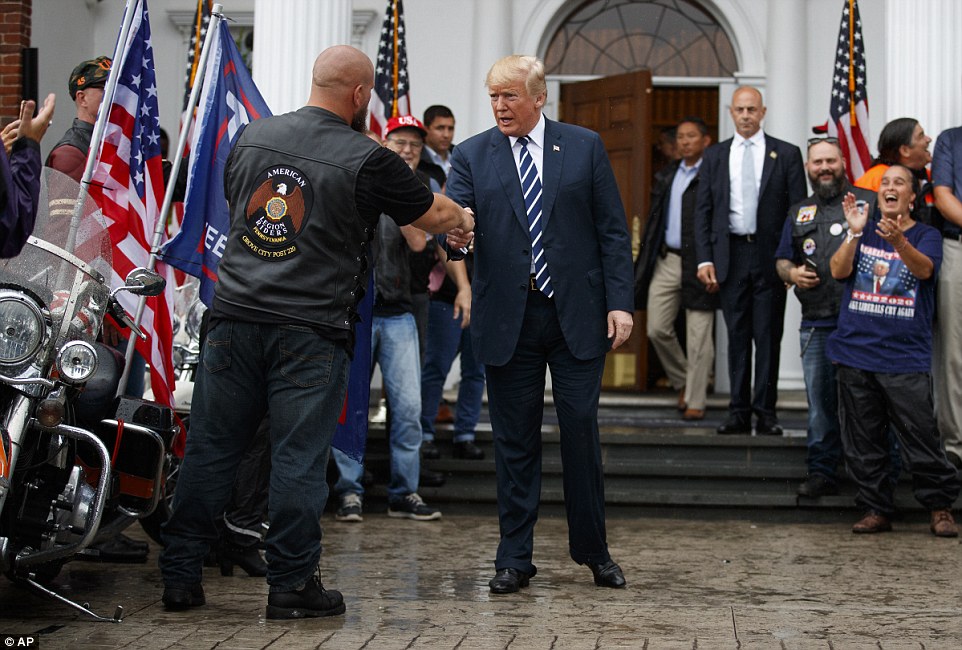 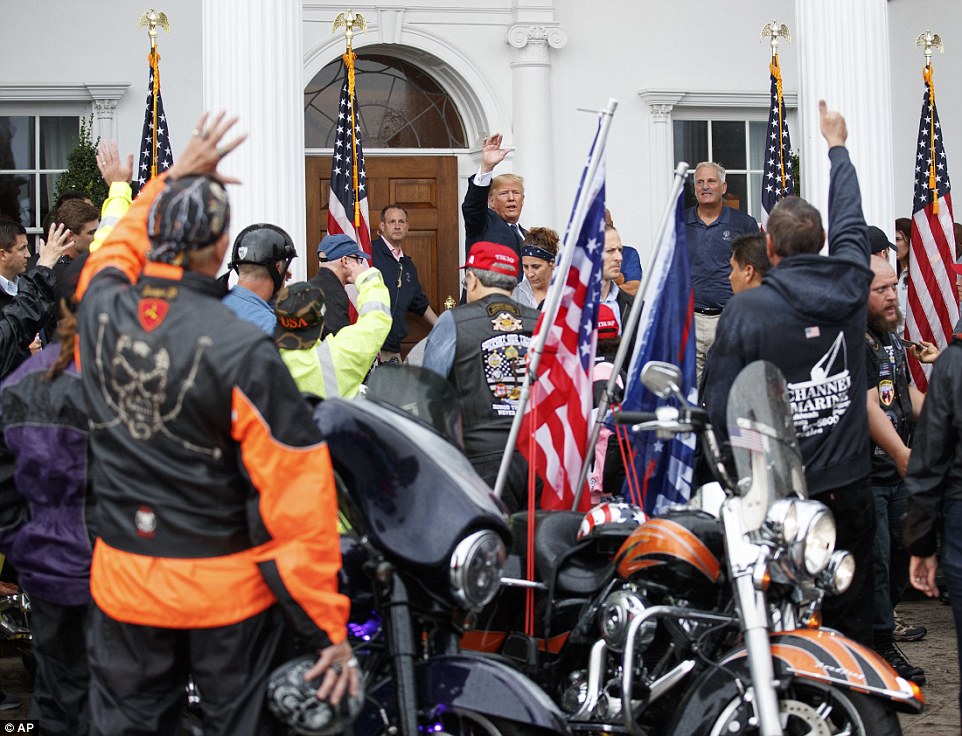 Trump spent several minutes shaking hands, posing for selfies and chatting quietly with the various bikers out of earshot of the press.

The President gave a thumbs up signal and his signature, walk-off song, the Rolling Stones’ You Can’t Always Get What You Want, piped in over the speakers.

The bikers began revving the engines of their motorcycles, which were parked in front of the clubhouse, over the strains of the Stones song.

As horns honked and engines revved, Trump returned inside the clubhouse, and the event ended at 4.11pm.