Washington: President Donald Trump has declared he has a "solid chance" of winning a second term in the White House in his final interview before the election results are revealed.

The President also vowed in an interview on Fox News that he would not "play games" by declaring an early victory if the results are not clear on election night. 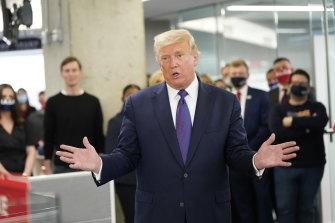 In his final interview before the election results are known, Donald Trump said he had a “solid chance” of winning.Credit:Bloomberg

Democratic nominee Joe Biden spent election day campaigning in Pennsylvania, where he said that he "feels good, but it ain't over till it's over".

Polls close in most voting locations on the US east coast at 11am AEDT and results should start being reported in states like Florida, Georgia and North Carolina soon after.

Biden spent the morning meeting with Democratic Party volunteers in Scranton, the town where he grew up, and later visited his childhood home. While there, he signed a message on the living room wall that read: "From this house to the White House with the grace of God."

Biden, who has a big lead in the national polls, told supporters on election eve: "Folks, I have a feeling we're coming together for a big win tomorrow."

More than 100 million Americans had already voted by mail or by casting a ballot at an early voting site before election day. Democrats are expected to dominate the early vote returns while Republicans will perform better with the election-day results. 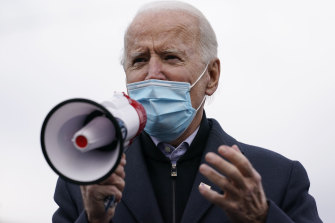 At many polling sites around the country, election-day lines have been relatively short and calm, with less pressure on polling places because of the surge of early voting. Still, voter turnout is expected to approach or exceed record levels.

In an interview on Fox and Friends, Trump said he believed his campaigning blitz would prove the difference in the battleground states.

"This reminds me, I hope it reminds me, of four years ago," he said. "Tremendous changes have taken place over the last week."

Asked when he might declare victory, Trump said: "I think we'll have victory, but only when there's victory and there's no reason to play games."

Speaking to Republican volunteers in Virginia, Trump said: "I hear we're doing well all over." He said that his voice was hoarse and "choppy" after his many rallies over recent days.

Asked about the possibility of delivering a concession speech, Trump said: "Winning is easy. Losing is never easy. Not for me it's not."

White House press secretary Kayleigh McEnany said the Trump campaign believed the President would be re-elected in "a landslide", calling swing states Ohio and Florida "a lock" for the President.

"Our voters turn out on Election Day," she said. "Today is the day the American people speak and endorse President Trump."

In a briefing for reporters Biden campaign chief Jen O'Malley Dillon said: "Under no scenario will Donald Trump be declared the victor on election night."

She said: 'We believe that the level of data we have, all the early vote that's in, and what we're going to see on election day is going to give us a very good sense of where we're headed, even if all the votes aren't counted."