Donald Trump throws his weight behind ambassador to Germany’s warning that U.S. could pull troops OUT and move them to Poland because Angela Merkel is spending too little on NATO defense

Donald Trump is throwing his weight behind ambassador to Germany Ric Grenell, the diplomat who warned last week that the U.S. could move troops stationed there to Poland if Berlin doesn’t meet its defense spending commitments to NATO.

Each member of the 70-year-old alliance has pledged to devote 2 per cent of its Gross Domestic Product to bolster the rest of the nations’ mutual defense against an attack – feared mainly from Russia.

Germany has consistently lagged behind, at about 1.36 per cent, drawing reactions from the president that range from annoyance to anger.

Grenell hinted in an email on Monday that his warnings are in sync with the thinking in the Oval Office.

‘I do what President Trump asks me to do and he’s been clear,’ Grenell told DailyMail.com.

Trump’s ambassador in Berlin told the Germany Press Agency last week that ‘[i]t is offensive to assume that the U.S. taxpayers will continue to pay for more than 50,000 Americans [troops] in #Germany, but the Germans get to spend their [budget] surplus on #domestic programs.’ 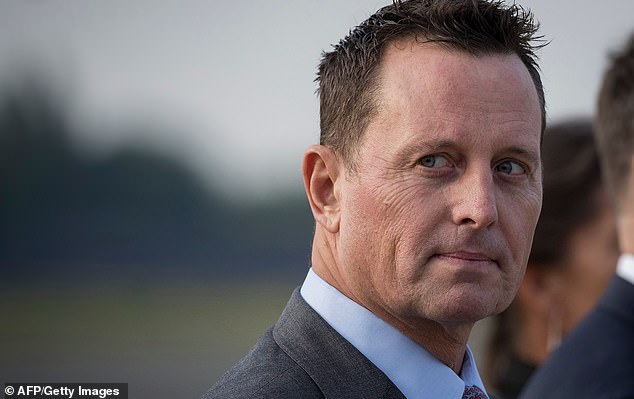 U.S. Ambassador to Germany Ric Grenell said Monday that his warnings about a possible redeployment of American troops from Germany to Poland aren’t uninformed: ‘I do what President Trump asks me to do and he’s been clear’ 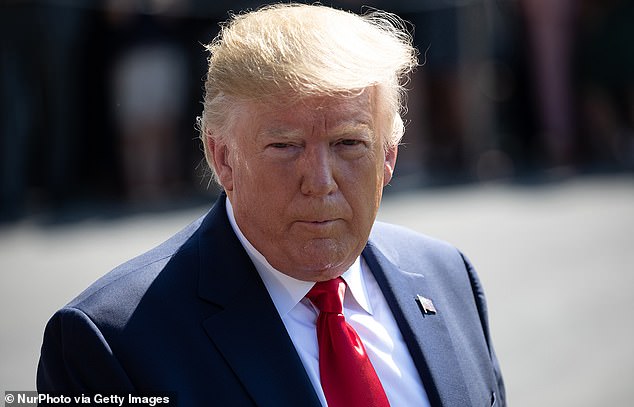 President Donald Trump threw his weight behind the transatlantic caution directed at German Chancellor Angela Merkel, retweeting a campaign adviser and a U.S. senator who insisted the threat was real 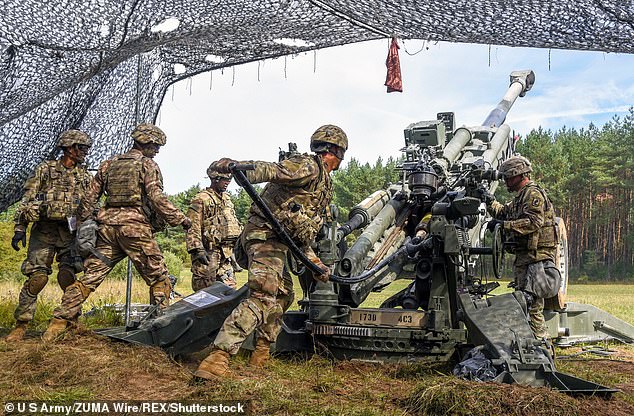 U.S. Soldiers in the 173rd Airborne Brigade are pictured last year loading a M777 howitzer during a live fire exercise in Germany; the Pentagon has about 35,000 active troops in Germany and employs another 17,000 American civilians and 12,000 Germans as part of the deployment

The president on Monday amplified warnings from Kentucky Sen. Rand Paul and campaign adviser (and girlfriend of Donald Trump Jr.) Kimberly Guilfoyle, suggesting without saying so explicitly that redeploying troops out of Germany isn’t an empty threat

He wasn’t speaking off the cuff, according to a White House official who said Monday that Trump has already directed National Security Advisor John Bolton to sort out the thorny issues that would develop if the 35,000 American troops were relocated to Poland.

There are also 17,000 civilians there supporting American military operations, which also employ about 12,000 Germans.

Grenell served as Bolton’s chief spokesman while he was the U.S. ambassador to the United Nations, and remains close to his former boss.

Trump has already engaged Polish President Andrzej Duda on the idea of a permanent U.S. military presence in his country, saying in June that he would redeploy 1,000 troops from there Germany as a start.

On Monday he retweeted Sen. Rand Paul and campaign adviser Kimberly Guilfoyle’s hard-line views on NATO funding. They had both shoved back against German think-tank executive Thorsten Benner, who called Grenell’s hint at a future troop pullout a ‘PR stunt.’

‘Ambassador @RichardGrenell doesn’t waste his time with PR stunts and he doesn’t have to. President Trump has repeatedly praised our Ambassador in Berlin. Spot on Ric,’ Guilfoyle tweeted.

In addition to her position with the campaign, Guilfoyle is dating Donald Trump Jr.

Sen. Paul asked in his own tweet: ‘Why is the United States always stuck paying for everyone when prosperous nations don’t pay their fair share?’

‘@RichardGrenell is absolutely right. We need to reevaluate commitments all over the world and decide what is best for America first! @realDonaldTrump has been doing this!’ said Paul.

The U.S. embassy in Berlin cited Grenell’s warning that it’s ‘offensive’ to think the United States will keep subsidizing the NATO military presence in Germany while that nation falls short despite budget surpluses

A think-tank executive in Europe taunted Grenell last wek, saying the idea of a troop pull-out from Germany was a ‘PR stunt’

The U.S. embassy in Warsaw, Poland supported the idea of a troop relocation; Poland meets its NATO spending obligations while Germany falls short 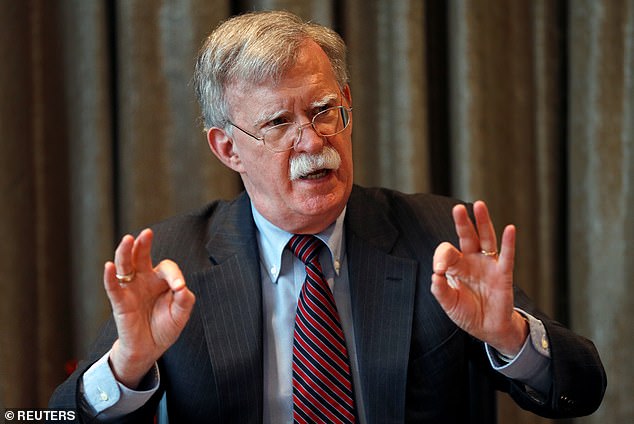 Grenell worked for years for John Bolton, Trump’s current national security adviser, while Bolton was the U.S. ambassador to the United Nations; the two remain close, and Grenell has a tight relationship with the president, suggesting that Grenell’s bombshells are originating in the White House

Georgette Mosbacher, the U.S. Ambassador to Poland, jumped last Thursday to criticize Germany for its foot-dragging on NATO resources.

‘Poland meets its 2% of GDP spending obligation toward NATO. Germany does not,’ Mosbacher tweeted. ‘We would welcome American troops in Germany to come to Poland.’

The Trump administration is already stinging from Germany’s refusal so far to join a planned U.S. Navy mission in the Strait of Hormuz, near Iran.

And the president is fuming at Germany for its collaboration with Russia to build a second natural gas pipeline across the Baltic Sea floor.

He will visit Poland later this month – and Denmark, which has used its permitting process to slow the pipeline’s progress.

After Der Spiegel writer Roland Nelles opined last week that Americans ‘should not care much about whether or not Germany participates in the Iran mission,’ Grenell fired back in a tweet.

‘There are 34,000 U.S. troops in Germany protecting Germans and Europeans. I can tell you this: @RolandNelles & @SPIEGELONLINE are wrong. Americans don’t understand why Germany isn’t meeting its NATO obligations & helping the West. And they are growing very annoyed by it.’ 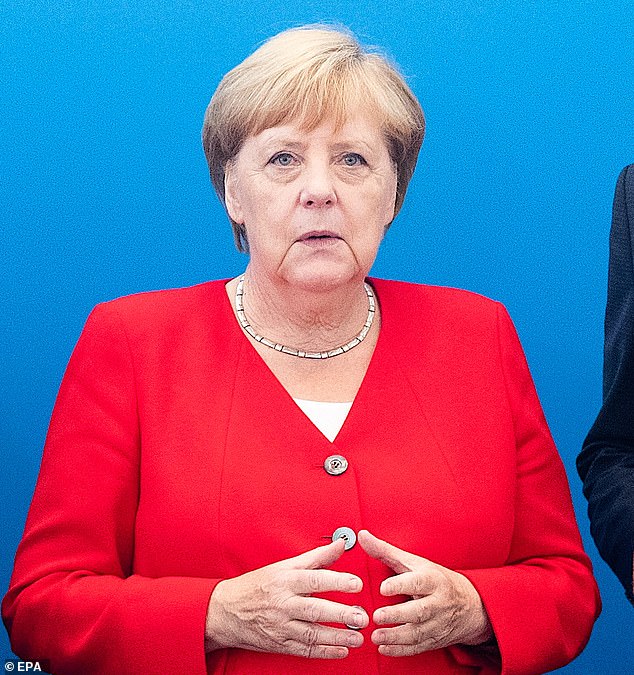 German Chancellor Angela Merkel has her country consistently lagging behind its obligation to spend 2 per cent of its GDP on defense, devoting just 1.36 per cent currently; ignoring Trump’s demands ahs brought stern reactions from the president 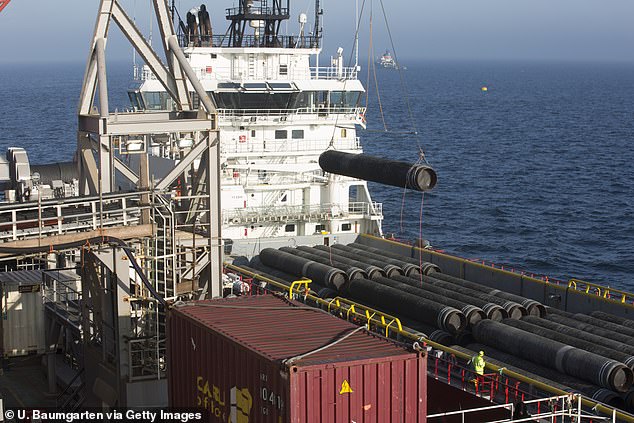 Trump is also furious with Germany for supporting a Moscow-backed natural gas pipeline called the Norrd Stream 2, which would bring Russian natural gas to western Europe without transiting Ukrainian territory 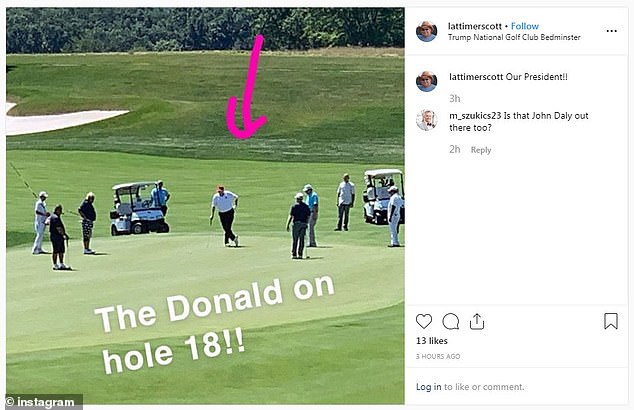 Trump is on vacation at his Bedminster, New Jersey golf resort, where someone spotted him golfing Monday with former PGA great John Daly

As tensions deepened, Grenell suggested to the German Press Agency that Trump shouldn’t be dismissed as he threatens a more aggressive form of diplomacy that Berlin should fear.

‘Multiple presidents have asked Europe’s largest economy to pay for its own defense,’ he said, referring to his host country. ‘This request has been made over many years and by many presidents.’

‘I think that we are at the point where Americans and the U.S. president are reacting at the multi-administration blow-off,’ Grenell added.

Dietmar Bartsch, chairman of the democratic socialist Left Party in the German Bundestag, said Sunday that ‘[i]f the Americans withdraw their soldiers, then they should take their nuclear weapons with them.’

‘And, of course, they should take it home, not to Poland,’ he added. ‘Because this will be another dramatic escalation in relations with Russia, which does not correspond to European and German interests.’