Kiev, Ukraine: Turkey's president on Monday denounced the Russian annexation of Crimea and pledged to support the territorial integrity of Ukraine. 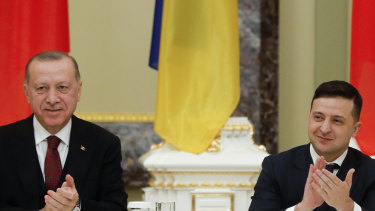 Recep Tayyip Erdogan also said on a visit to Ukraine that Turkey will help build housing for 500 families of Crimean Tatars who have relocated to other parts of Ukraine after Crimea's annexation.

Crimean Tatars are a Turkic ethnic group indigenous to Crimea. Many have opposed Russia's annexation of the Black Sea peninsula.

Russia annexed Ukraine's Crimea in 2014 in a move that hasn't been recognised by most of the world's nations and that triggered Western sanctions against Moscow.

Speaking at a news conference after talks with Ukrainian President Volodymyr Zelensky, Erdogan emphasised that "Turkey doesn't recognise the illegitimate annexation of Crimea."

Zelensky noted that Ukraine counts on Turkey to help win the release of Crimean Tatars arrested in Crimea.

Russian security forces in Crimea have arrested dozens of Crimean Tatars on charges of involvement in a militant Islamist groups – charges that rights activists have denounced as bogus.

Zelensky also said that he and Erdogan discussed possible natural gas supplies to Ukraine via Turkey.