Jakarta: Seven people have died in election violence in the Indonesian capital, police said on Thursday, as calm returned to the city and the losing presidential candidate prepared to challenge the result in court.

Police revealed that at least two of the people detained during the riots belongs to a group that pledged support to Islamic State. 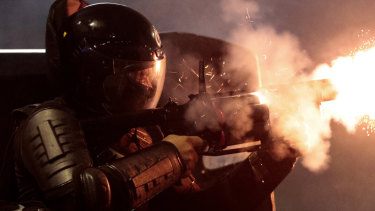 The apparently orchestrated chaos that turned central Jakarta into a battleground started Tuesday night during peaceful protests over official results that confirmed President Joko Widodo had won the April 17 election, securing him a second term.

The defeated candidate, former General Prabowo Subianto, who also lost to Joko in 2014, has refused to accept the result and instead declared himself the winner. 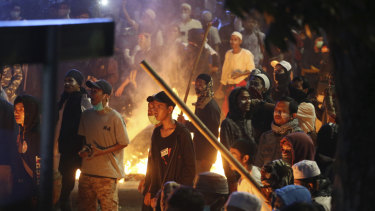 Supporters of the losing presidential candidate stand near a fire during clashes with police on Wednesday night.Credit:AP

Subianto and his campaign have alleged massive election fraud but not provided any credible evidence. They didn't file a Constitutional Court challenge to the election result on Thursday as planned but have until Friday to do so.

The election supervisory agency earlier this week rejected Subianto's complaint about the election's integrity after the only evidence of fraud provided by his team was links to online articles.

The rioting in Jakarta was planned and not spontaneous and many of the several hundred arrested came from outside Jakarta, according to police.

Officers found an ambulance filled with stones and other weapons. Some of those arrested had envelopes containing 250,000-500,000 rupiah ($25-$50), said Jakarta police chief Argo Yuwono. The minimum wage in Jakarta is about $13 a day.

"They intended to carry out jihad during May 21 and 22 protests," Iqbal said.

"This is not a spontaneous incident, this is something by design," he told reporters.

"There are indications that the mobs are paid and bent on causing chaos."

In a video on his Twitter account late on Wednesday, Prabowo urged his supporters to disperse peacefully.

The government has deployed about 50,000 police and soldiers in Jakarta. Many residents have left the city and parts of the downtown are closed to traffic, with the election supervisory agency and Election Commission barricaded with razor wire.