TWO Russian spy ships have been discovered patrolling within 30-miles of a British naval base and an RAF Typhoon squadron.

The vessels, bristling with antennae, were found lurking in international waters close to RAF Lossiemouth – home of the UK’s Poseidon spy plane fleet. 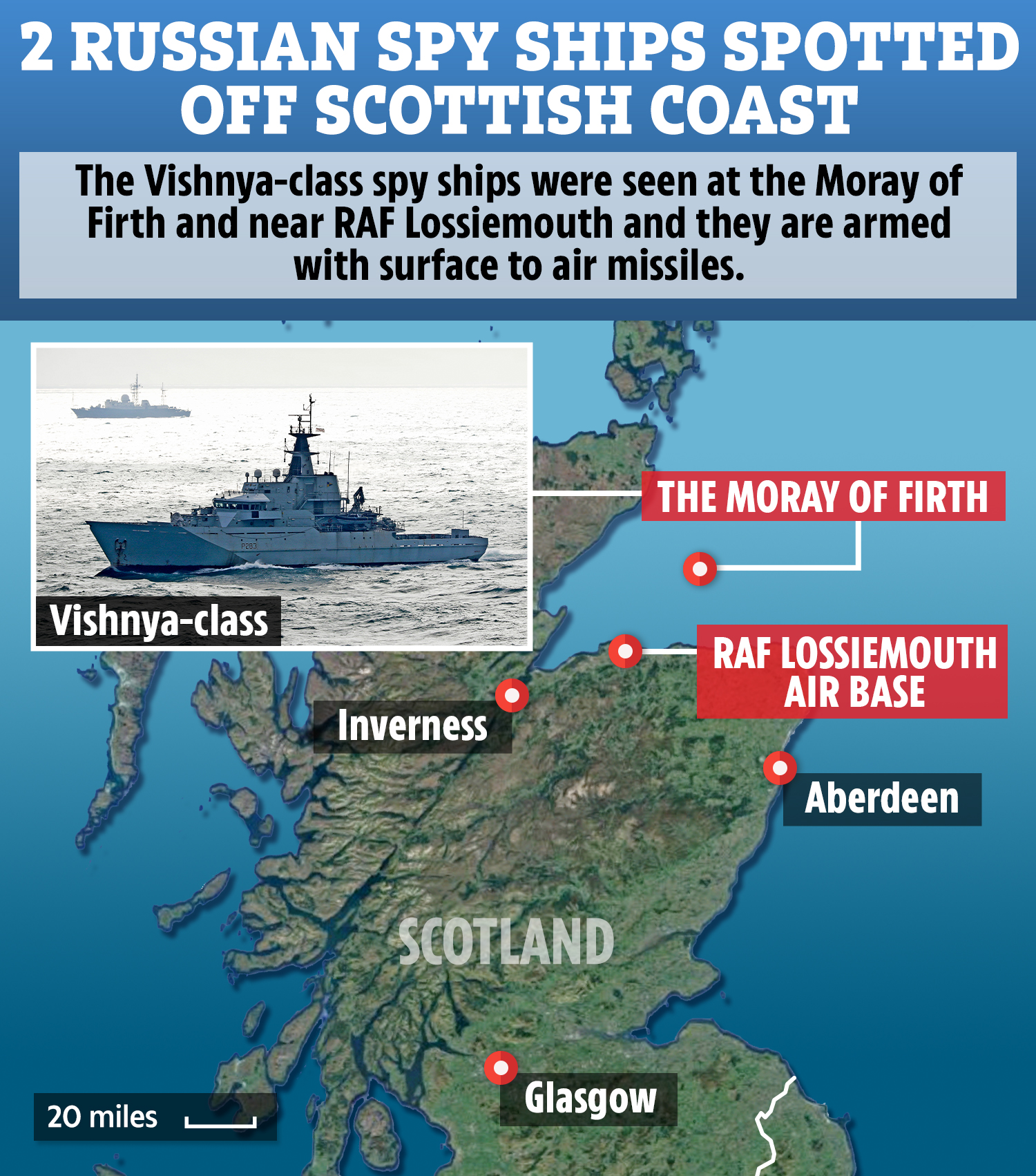 The Vishnya-class spy ships are designed to gather signals intelligence andarmed with surface to air missiles.

The Royal Navy tracked the vessels when they approached the Moray Firth last week – and they became visible on commercial satellite imagery on November 6.

Radars on the ships can monitor take-off and landing of the P8 Poseidon fleet, which scan the seas around Britain for signs of Russian submarines.

NavalNews reports that the submarines are also accompanied by a Russian Navy replenishment ship, believed to be the Sergey Osipov.

The Osipov has been lurking in the area for two weeks – and was previously spotted refuelling a Russian Navy missile destroyer on October 27.

The spy ships are reminiscent of Soviet ‘fishing trawlers’ which used to operate off Scotland during the Cold War, as part of the KGB’s extensive espionage operations.

These vessels monitored British and American warships – and kept a particularly close eye on nuclear submarines leaving the Clyde.

WHAT IS THE VISHNYA-CLASS SPY SHIP?

Navy chiefs have warned that Russian naval activity is at its highest level since the end of the Cold War.

A Naval source said the Russian ships were "sheltering from the weather".

"They are in international waters and they are allowed to be there but we kept a very close eye on them," the source said.

It comes as General Sir Nick Carter made the frightening prediction on Sunday that the economic fallout from the coronavirus pandemic could lead to World War Three.

Sir Nick told Sky News he was concerned that an increase in regional conflicts across the world could ramp up into a "a full-blown war".

The senior official argued that, with the world being "a very uncertain and anxious place" during the pandemic, there was the possibility "you could see escalation lead to miscalculation".

Meanwhile in Russia, the Kremlin has vigorously denied claims that President Putin, 68, will step down over concerns that he may have Parkinson's Disease.

Observers who studied recent footage of the strongman noted his legs appeared to be in constant motion and he looked to be in pain while clutching the armrest of a chair.

Speculation mounted last week that Putin's 20-year reign could come to an end after laws were drafted to make him a senator-for-life when he resigns.

But the Kremlin hit back – insisting that the Putin was in "excellent health" and "everything is fine with the President".

The Sun Online has approached the Ministry of Defense for comment.