This is the heart-warming moment a toddler with cerebal palsy shrieked with joy as he jumped in his very first muddy puddle.

Little Wilson Sweeney, from Halifax in West Yorkshire, giggled with delight as he kicked his brightly-coloured wellington boots in the puddle.

The two-year-old, whose cerebral palsy affects his ability to use all four limbs, didn’t let his disability hold him back as he splashed around in the muddy water. 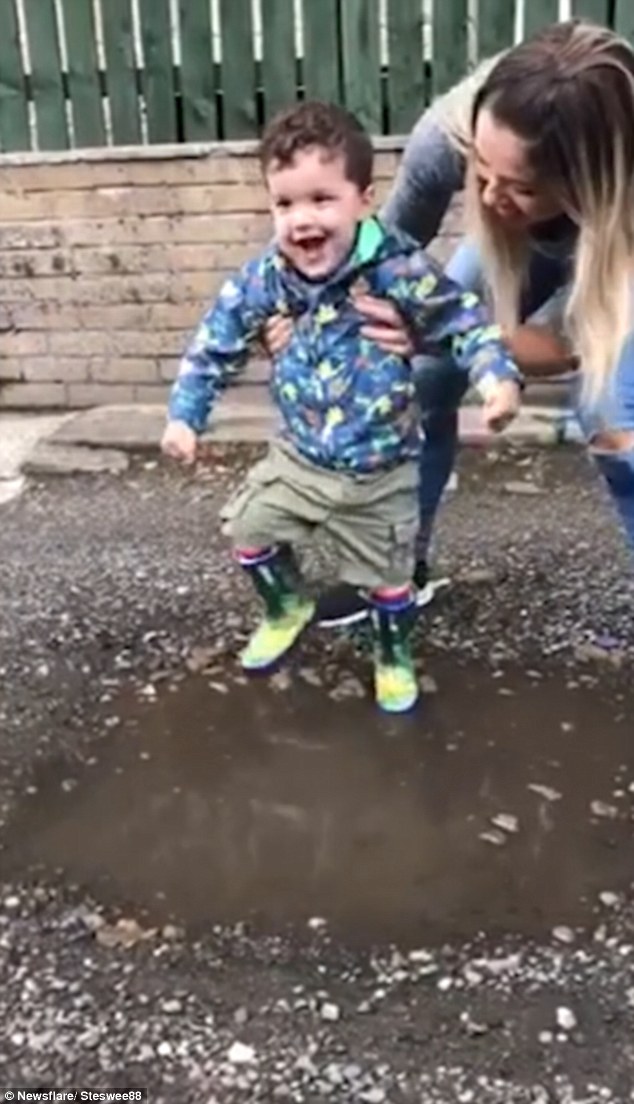 Little Wilson Sweeney, from Halifax, who has cerebral palsy, jumped with joy as he splashed in his very first puddle 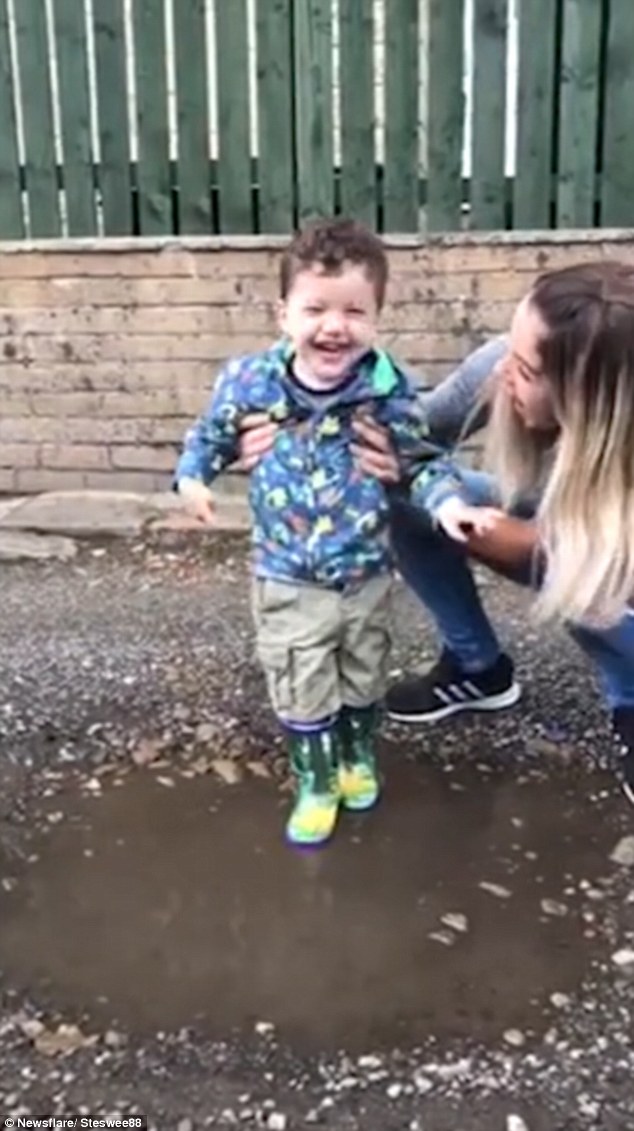 The two-year-old laughed towards the camera as his mother held him upright so he could kick the water. Wilson has difficulties with muscle control and struggles with balance and coordination

He even kicked water towards his mother, who was helping him to stand, and giggled as it barely misses her shoes.

The determined toddler joyously laughed at the camera as he continued playing in the puddle, marveling at the water as it landed on his shorts.

Little Wilson has difficulties with muscle control, balance and coordination due to his cerebral palsy, which makes crawling or even sitting very difficult.

His family expressed the importance of him being able to reach this childhood milestone online.

They wrote: ‘Wilson never splashed in a puddle until today. Something so simple and something that every toddler loves to do.

‘Wilson is no exception, he had the best time.’ 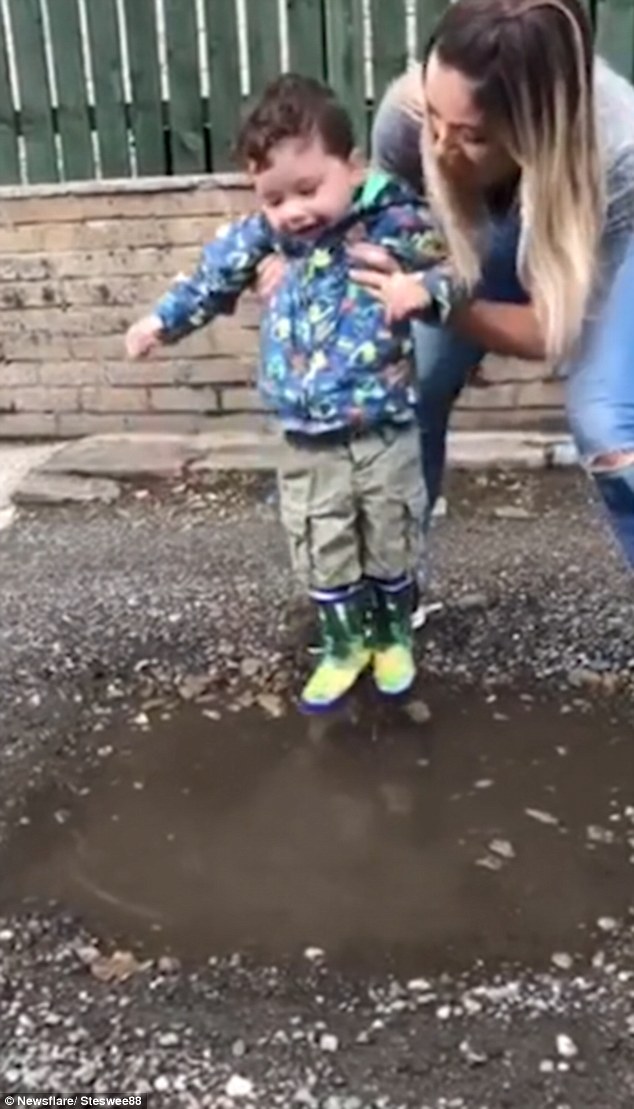 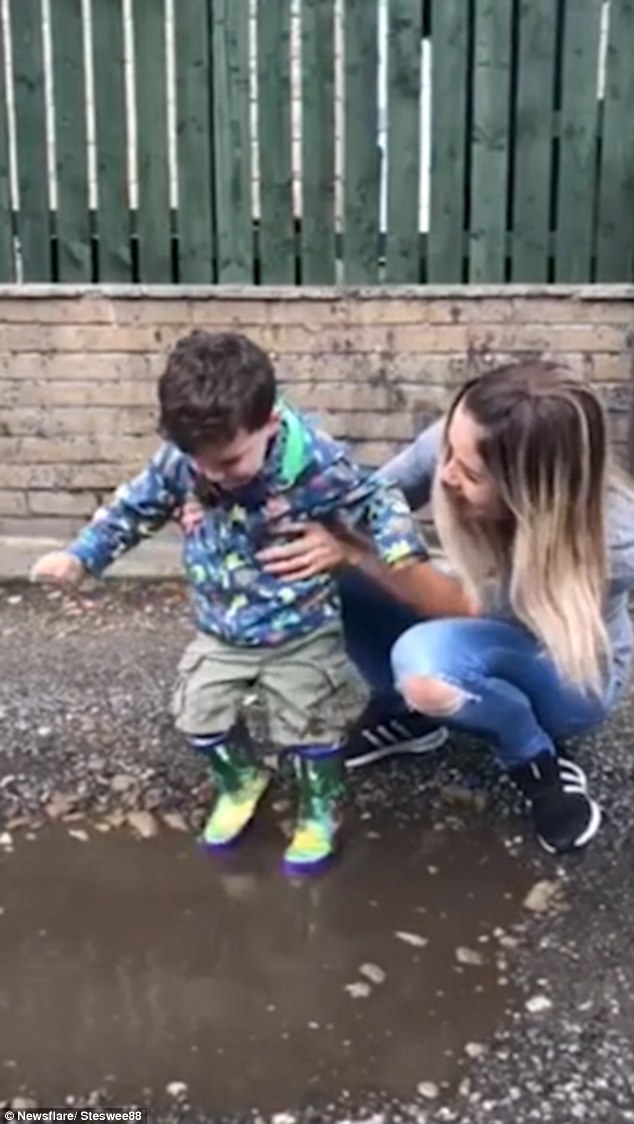 His family are now hoping to raise £100,000 to fund life-changing surgery that could reduce lower spasticity in his limbs to help him sit up on his own and even walk- something that is not available on the NHS

The toddler was diagnosed with Panton-Valentine leukocidin (PVL) at just 13 months old, which led to a further diagnosis of cerebral palsy.

His family are now hoping to raise £100,000 to fund life-changing Selective Dorsal Rhizotomy (SDR) surgery which is not currently available on the NHS.

This surgery could reduce lower limb spasticity in his lower limbs – potentially helping him to sit up on his own, or even walk alongside his younger sister Ava.

On their GoFundMe page, the family said: ‘Our wish is that Wilson will be free from the pain that the spasticity causes and one day be able to sit up on his own, walk and maybe even run alongside Ava playing just as a child should be able to.

‘We just want him to have the chance to do the things we all take for granted.’