Britain’s airports could be temporarily closed, aviation bosses have warned after ministers were accused of a U-turn on a promise of special support.

Flatlining footfall could see airports shut within weeks, with plummeting passenger numbers forcing airlines such as easyJet and Ryanair to ground their whole fleet.

Meanwhile bigger carriers such as British Airways and Virgin Atlantic have cut schedules by up to 90 per cent as Britain’s skies have fallen quiet in recent weeks.

But the lack of flights has been welcomed by many Londoners more used to the noise overhead – with one, Pav, tweeting: ‘I’m taking a walk where I live in London. The air has never smelt so fresh since I’ve lived here. No planes, you can hear the birds chirping. Actually lovely.’

Another, author Jill Hopper, said: ‘In London I try to stargaze but the sky is always full of planes. Tonight the sky is a deep pure navy blue and every bright object is a star.’ 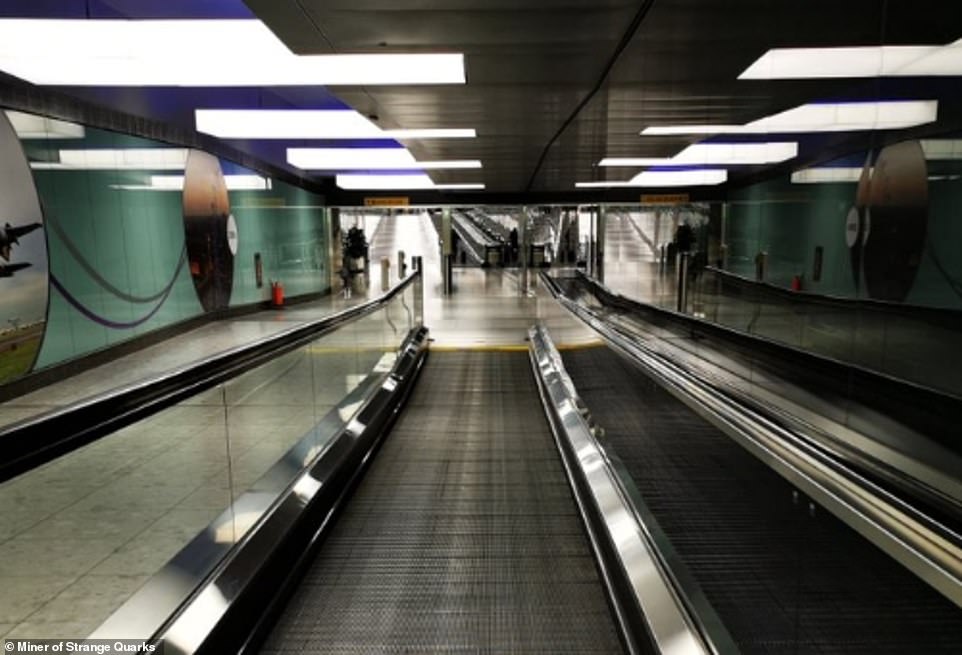 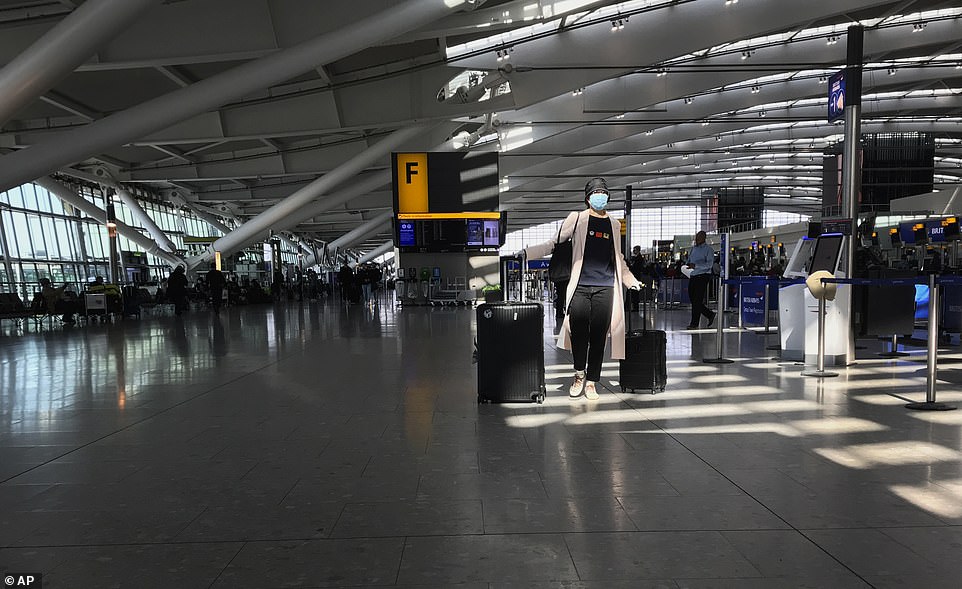 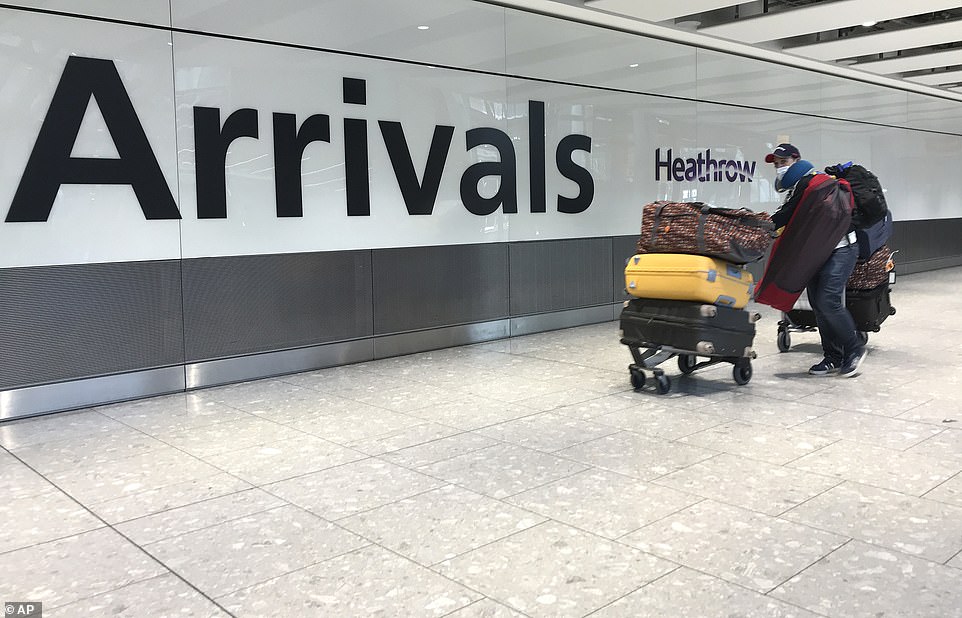 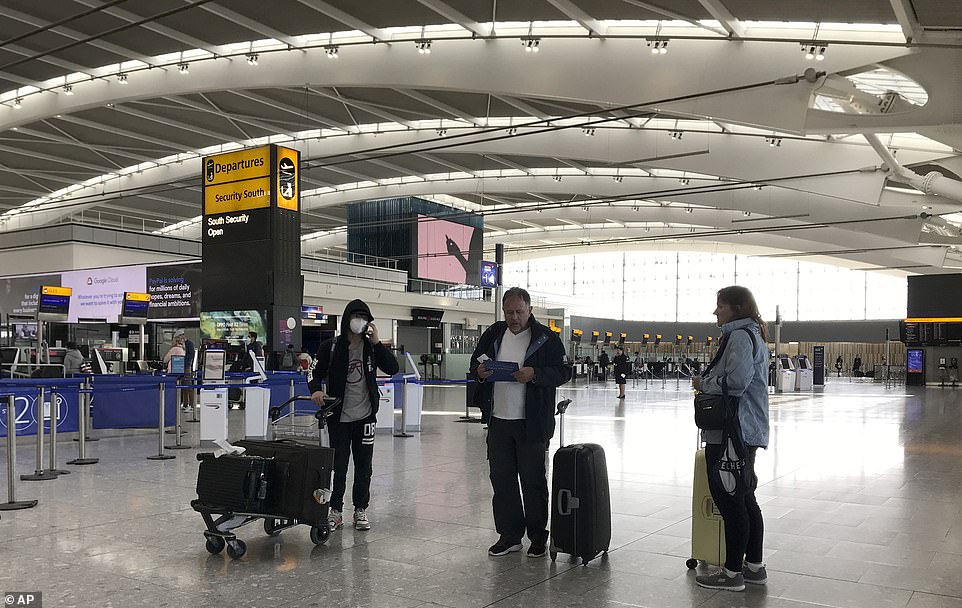 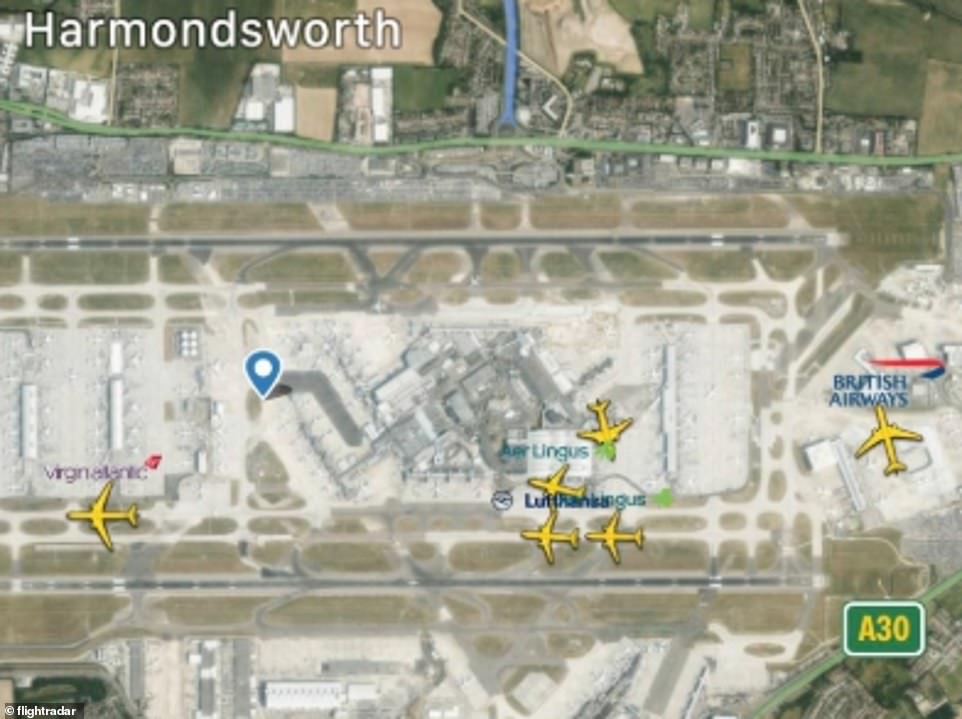 Chancellor Rishi Sunak had said last week he was preparing a package to help the aviation industry, rumoured to include a multi-billion-pound deal which could have seen the Government purchase stakes in the hardest-hit airlines.

But he has now told industry leaders that the Treasury will provide support only ‘as a last resort’ – and only if individual companies have ‘exhausted other options’ such as raising extra capital from investors.

The Airport Operators Association, which represents UK airports, accused the Government of abandoning the sector amid fears some airlines could collapse within weeks.

Chief executive Karen Dee said: ‘Our industry will now have to fight on its own to protect its workforce and its future. With passenger numbers approaching close to zero, airports have seen a major drop in revenue. 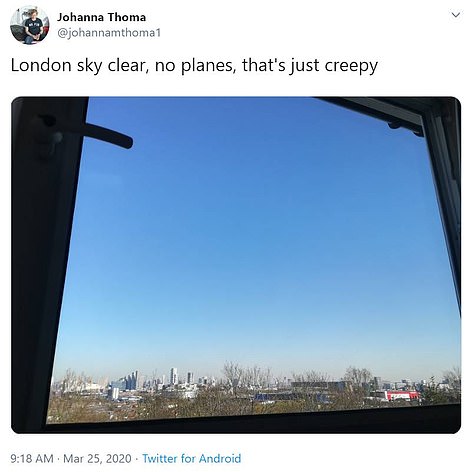 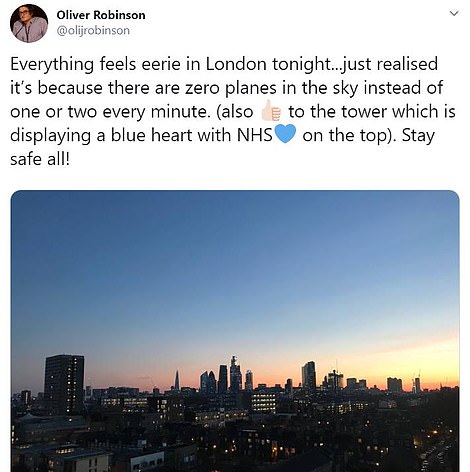 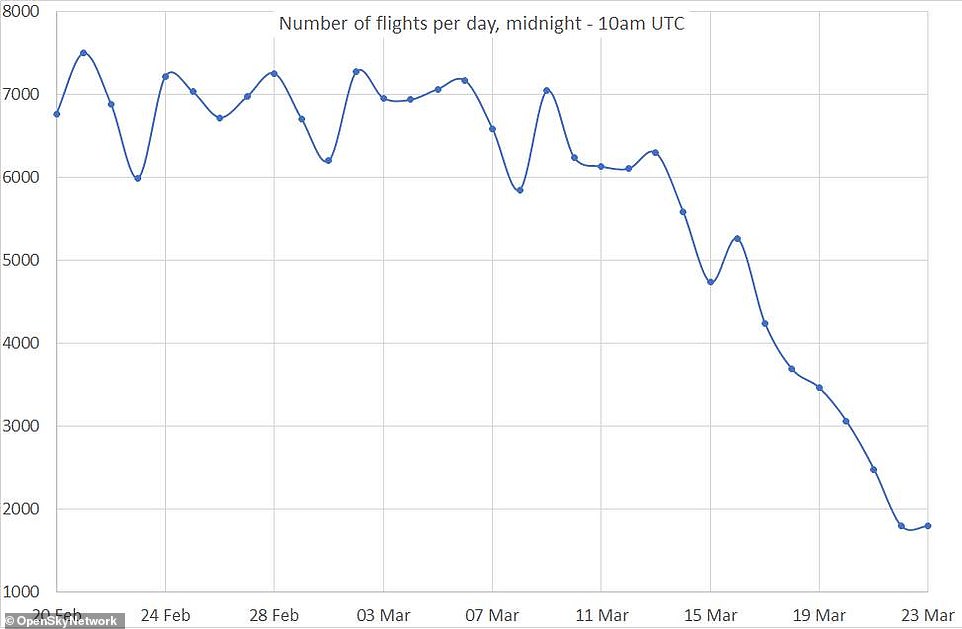 The drop in air traffic over Europe  is seen over the past month, with just 1,700 flights on Monday, compared to a normal 7,000

‘They are taking unprecedented steps to safeguard airport staff and operations, which could include in some cases considering shutting down for a period of time. This could have major impacts for UK communities and businesses.’

The AOA has demanded a support package that included measures such as relaxing regulations relating to mandatory training requirements, extending business rate relief to airports and deferring all aviation taxes for the duration of global flight restrictions.

Virgin Atlantic has also urged the Government to offer a £7.5billion bailout, while the Balpa pilots’ union warned last week that aviation companies could begin ‘winding down’ in the coming days without more support.

Many of the country’s smaller regional airports were already struggling before the pandemic following the collapse of Flybe earlier this month. 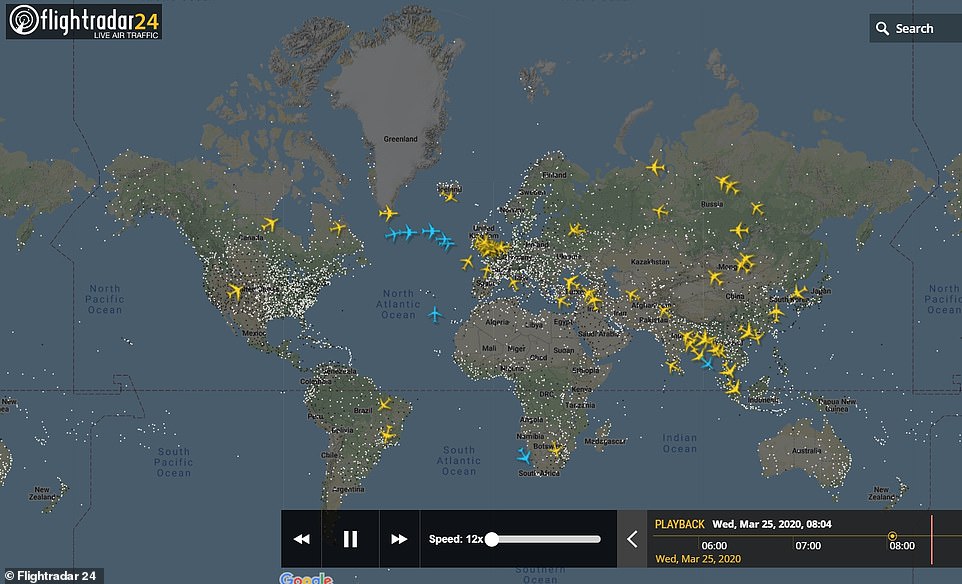 TODAY: This map shows the low number of planes now travelling across the world, with only a handful over North America 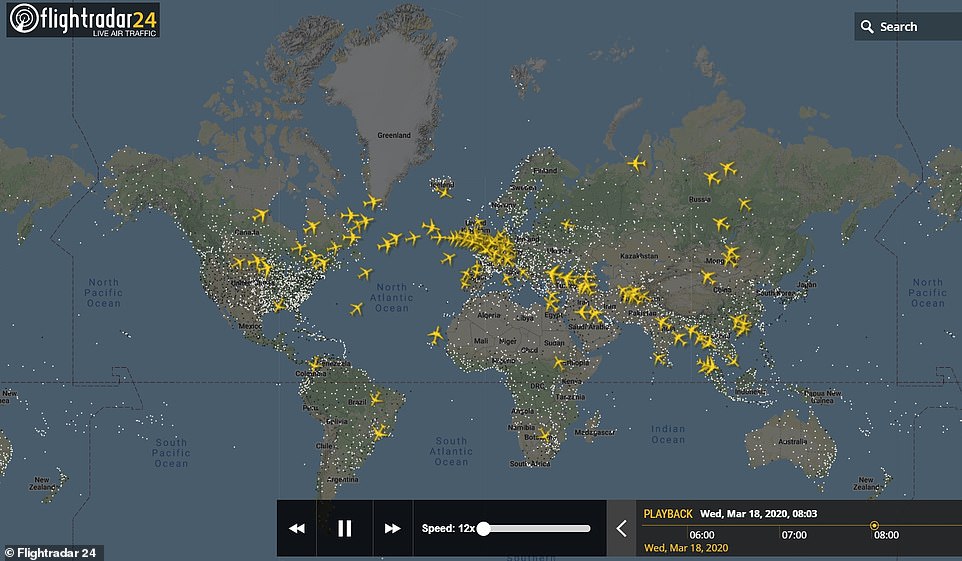 LAST WEDNESDAY: Flight traffic today is also down on this time last week when there were still a significant number of flights

In his letter to the industry, the Chancellor says: ‘Given the significant importance of the aviation sector to our economy and economic recovery, the Government is prepared to enter negotiations with individual companies seeking bespoke support as a last resort, having exhausted other options.

‘However further taxpayer support would only be possible if all commercial avenues have been fully explored, including raising further capital from existing investors and discussing arrangements with financial stakeholders.’

The Mail understands the decision not to provide a single package of support was taken after it became clear that each aviation company had very different needs.

Ministers are confident that bigger firms with wealthy shareholders will weather the storm without the need for billions in taxpayer cash. 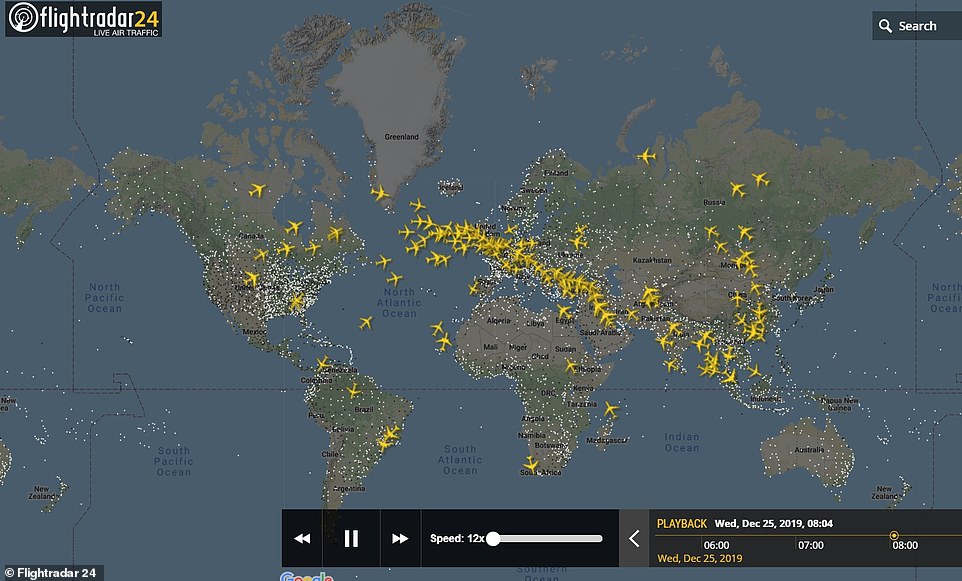 CHRISTMAS DAY 2019: Flight usage was higher even on Christmas Day last year, as this Flightradar24 graphic shows above 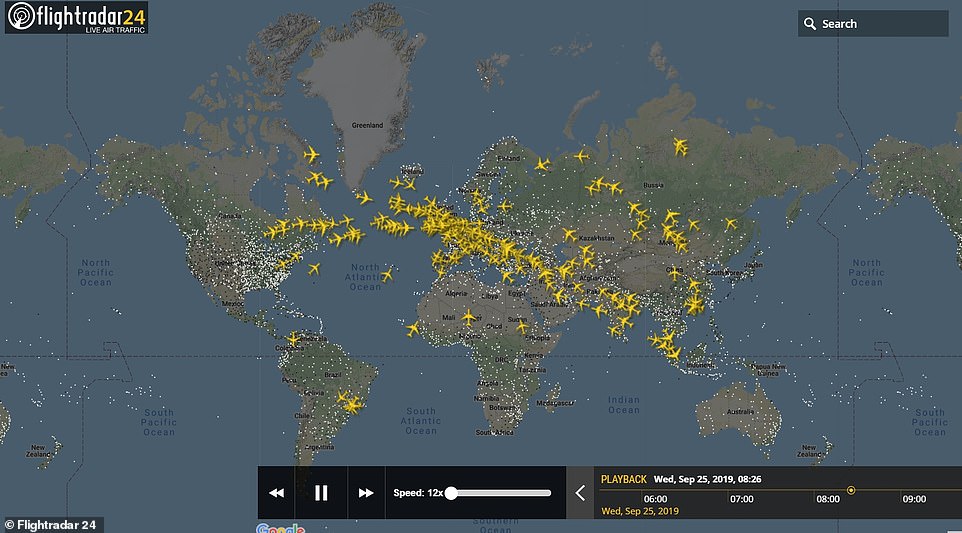 SIX MONTHS AGO: Flight usage on a normal Wednesday in September 2019 shows a comparison to the low figures today

This was underlined last week after easyJet pressed ahead with a £174million payout to shareholders – days after calling for a state loan to help them survive. One third of the cash went to founder Sir Stelios Haji-Ioannou.

Sir Richard Branson has pledged £215million to support Virgin Atlantic, which he part-owns, but the airline is still calling for a taxpayer bailout.

A Treasury spokesman said: ‘The aviation sector is important to the UK economy, and will be able to draw upon the unprecedented package of measures announced by the Chancellor in recent days, including a Bank of England scheme for firms to raise capital, Time to Pay flexibilities with tax bills, financial support for employees and VAT deferrals.

‘We are continuing to work closely with the sector and are willing to consider the situation of individual firms, so long as all other government schemes have been explored and all commercial options exhausted, including raising capital from existing investors.’ 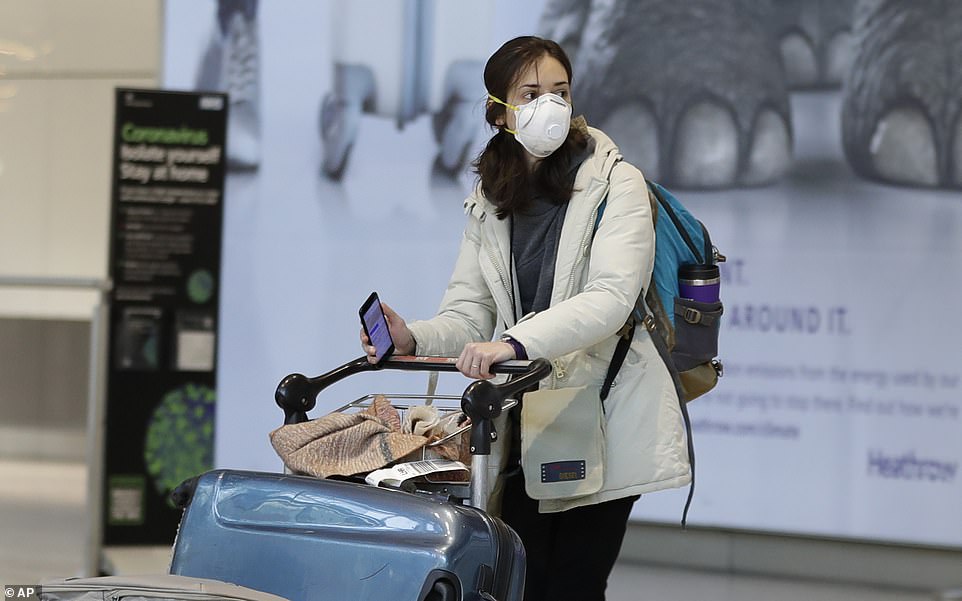 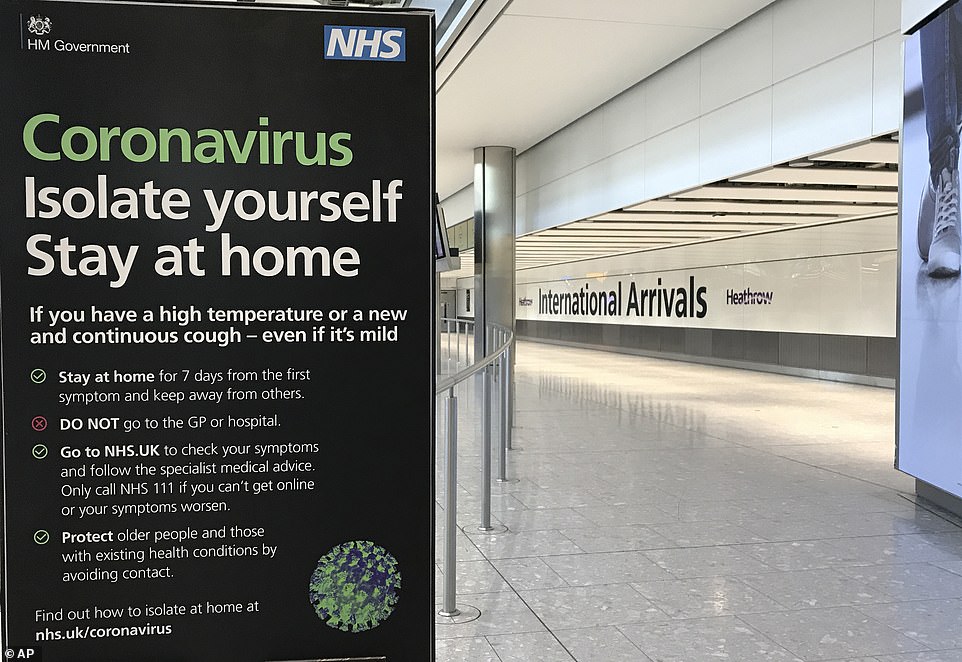 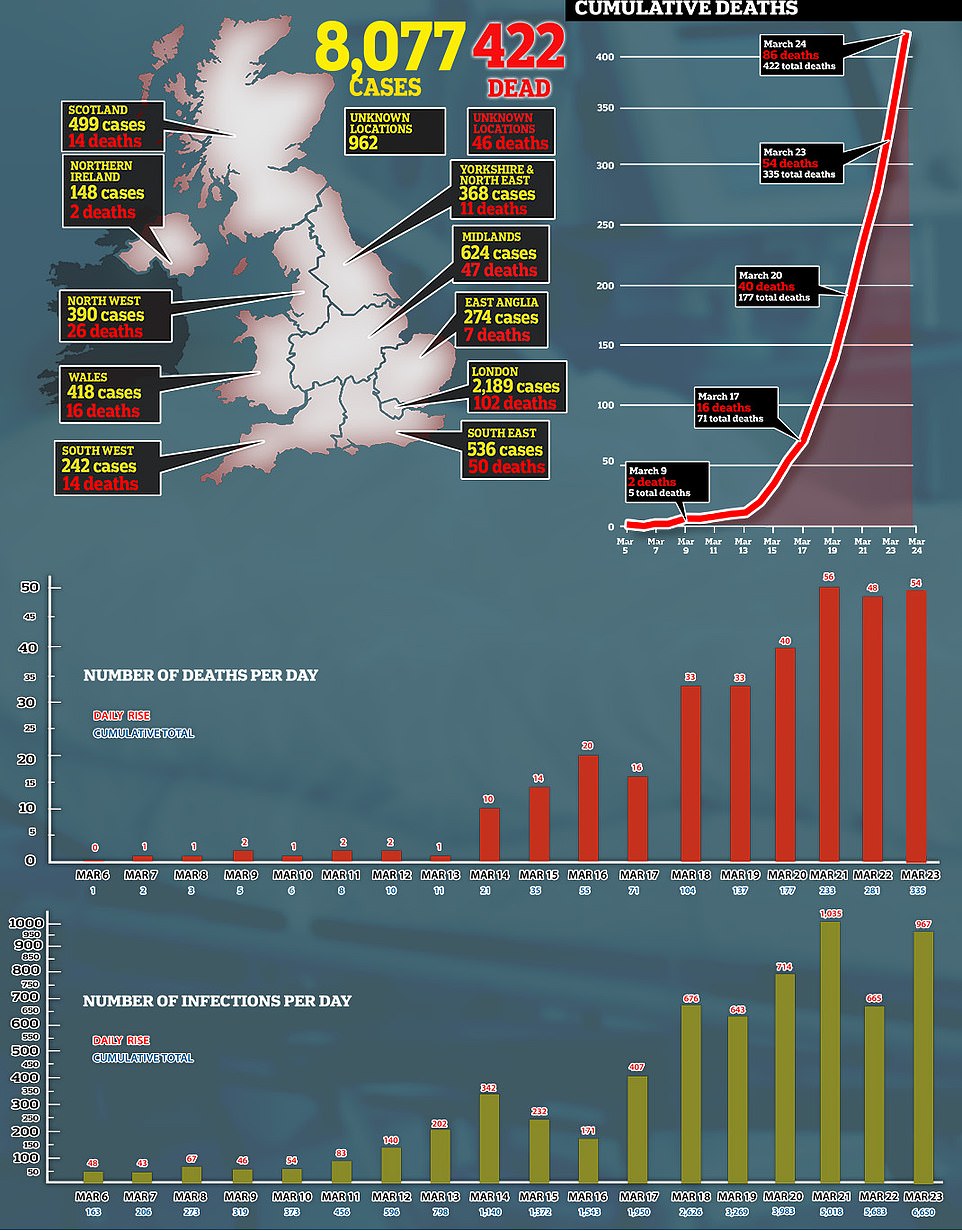 The British Airline Pilots Association warned last week that aviation companies could begin ‘winding down’ in the coming days without more support.

He added it was ‘essential’ that wider measures to support businesses ‘are implemented as quickly as possible, with accompanying further guidance, to support airlines’.