The seven-year-old daughter of the navigator killed on the Ukrainian military plane horror messaged her father minutes before the fireball crash which killed all but one of the 27 on board.

Liza Ostapenko appeared to have a premonition of the terrible tragedy in which only one military cadet survived.

‘I’m just worrying about you,’ the girl told captain Oleksiy Ostapenko, 28, second in command of the ill-fated An-28, who was killed in the inferno.

He had received his daughter’s message and replied from the cockpit at 8.25pm on Friday: ‘Don’t worry, all will be good!’

At 8.35pm he added smiling emojis.

Around ten minutes later the plane crashed with reports suggesting the left engine had failed and the wing was ablaze before it came down.

The crash was soon after take off as the aircraft attempted an emergency landing. 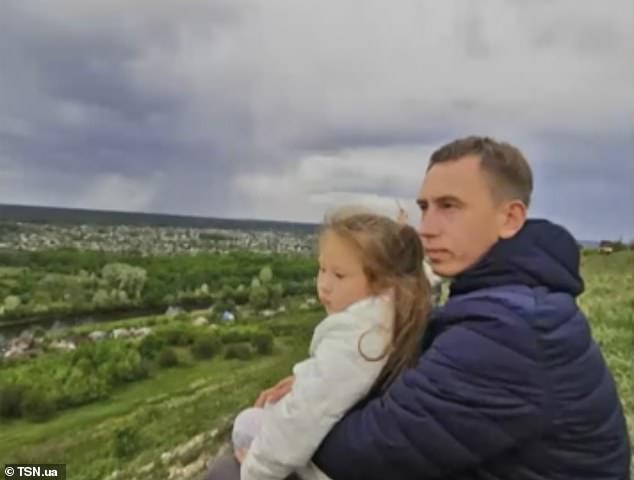 Oleksiy Ostapenko, 28, who was second in command of the ill-fated An-28 aircraft, received a message from his daughter Liza (pictured together) just 10 minutes before the crash 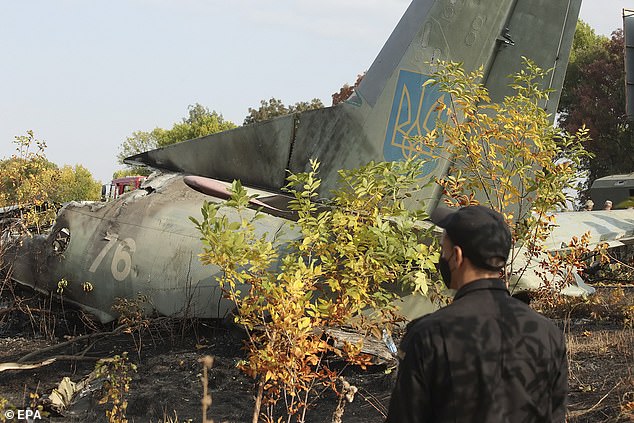 When her mother Olena heard about Oleksiy’s death, Liza tried to comfort her, revealing her father’s recent words.

Olena told TSN channel: ‘My daughter told me: “Mum, wait a bit, maybe he will reply?”

‘She pulled out her phone, and I saw this exchange.

‘It’s not that I wasn’t touched by this… it is more about I had a feeling that she seemed to be anticipating something at that moment.’

The girl then texted her father again at 9.15pm: ‘Dad are you alive?’

There was no reply.

Liza’s first earlier message to her father was not disclosed but it led to him replying: ‘Lizusha (Liza), so what happened?’

It was then she told him she was worrying about him. 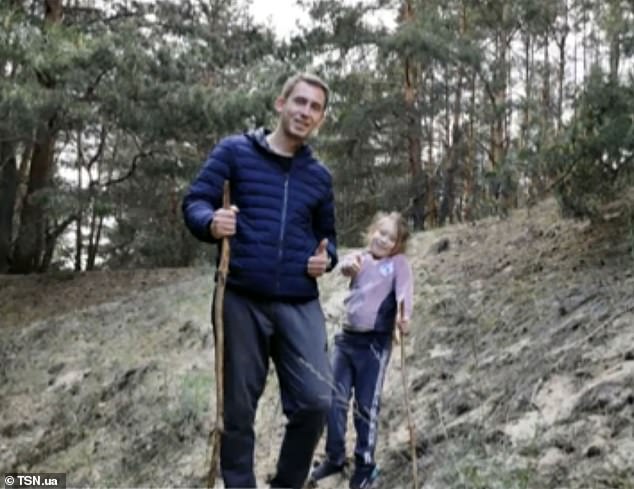 Oleksiy (pictured alongside Liza) had replied to the message from the cockpit at 8.25pm on Friday to say ‘don’t worry, all will be good!’ 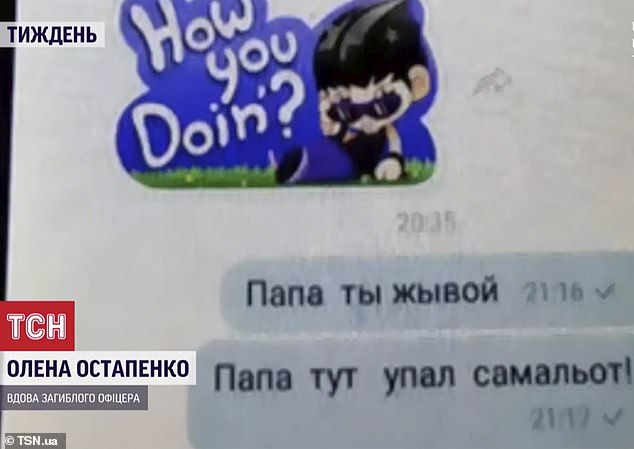 Olena said of her husband: ‘This was his profession, his vocation. And he did it well, he knew this well. He didn’t know anything except flying.’

The explosion was so intense that it is expected to take between two and three weeks for most of the charred military cadets and their trainers to be identified by DNA.

The sole survivor of the air horror Vyacheslav Zolochevskyi, a trainee pilot, has spoken to crash investigators regarding the final minutes before the crash but his testimony has not been made public.

Now in hospital, his life not in danger, he told Ukrainian president Volodymyr Zelensky who visited him: ‘It was like a computer game.

‘When I regained consciousness next to the plane, I saw the aircraft on fire.

‘There were bodies everywhere. I started to extinguish my burning colleague.’ 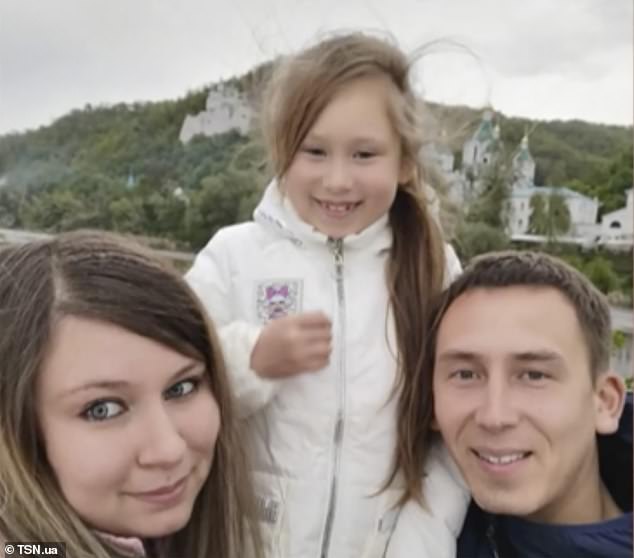 Olena said of her husband (pictured together with Liza): ‘This was his profession, his vocation. And he did it well, he knew this well. He didn’t know anything except flying’ 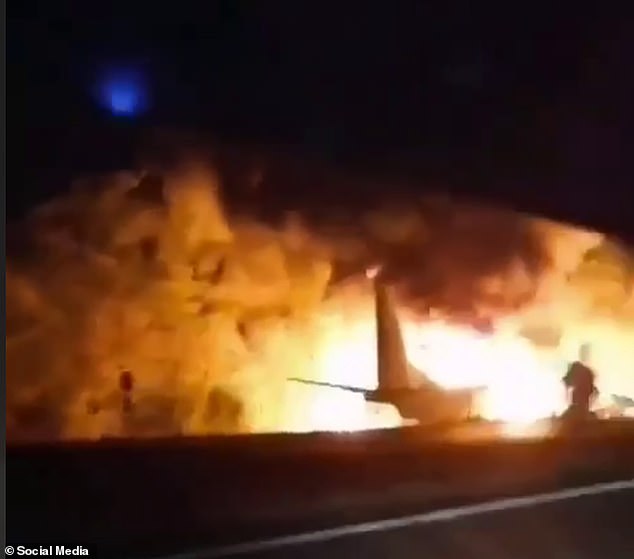 The sole survivor’s father Vitaly Zolochevskyi, 50, is a pilot who says he had survived three plane crashed, said: ‘I came down three times.

‘The fact my son survived suggests that he really is the son of his father.

‘I visited him today. He really has no fractures, only bruises.

‘Everyone says that he jumped out of the plane, but this is not entirely true.

‘He was thrown out, pushed out of there. I also know that he tried to save his friend.’ His mother Irina Zolochevskaya, referring to the date of the crash, posted: ‘I’m proud of you son! Get better!

‘Your second birthday is now September 25!’

One person who commented on the post wrote: ‘Get better soon. God gave you a chance for a reason, I believe that you will achieve great success.

‘You are needed here, your mission is not completed. Hold on, brother!’

‘He told about certain circumstances before the crash. They are set out in the interrogation report. They will become. Known later.’

He warned that matching DNA to the charred remains will take time.

‘Tests for all 25 individuals will take place in Kharkiv. This will take from two to three weeks.’

One Plus One TV channel questioned whether the crash could have been caused by foul play.

‘It is unclear why the investigators are not considering the theory of sabotage,’ said a report. 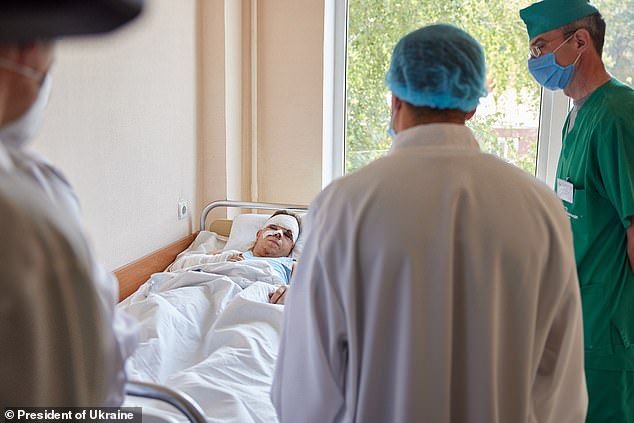 The 40-year-old plane was inherited from the Soviet Union.

The dead were students or teachers at the National Air Force University.

‘It is difficult to find words to express the pain of this loss,’ he said.

The plane was around one mile from Chuhuiv military air base when it crashed, and some 60 miles from the front line where government forces are fighting pro-Russian rebels.